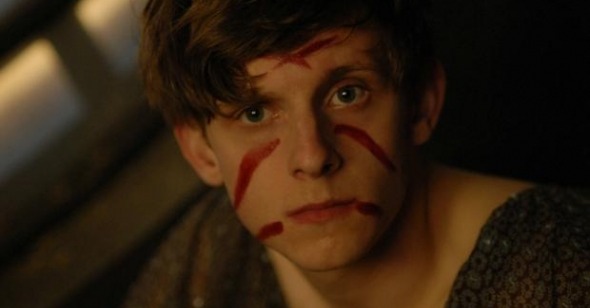 It’s not just films like Southland Tales—the shoot-the-moon disasters—that deserve disdain. Superficially psychological dramas like David Mackenzie’s Mister Foe can be just as sloppy, pretentiously titillating, and falsely representative of human behavior as a pseudo-irreverent cult flailing like Richard Kelly’s phonyfest, one of the worst films of the decade. Off the top of my head I can’t remember the last time a film as outright preposterous as Mister Foe, the latest from would-be Scottish provocateur Mackenzie, also demanded to be taken so seriously.

When a friend came back fuming from Pan’s Labyrinth she set about to recount each of its stupidities point by point, a strategy of debunking its claims to significance via the mere recitation of its cockamamie plot. The same can be done for Mister Foe. So, yeah, spoilers ahead. In adapting Peter Jinks’s novel, Mackenzie and cowriter Ed Whitmore follow the sexual maturation of Hallam Foe (the film’s UK title) from stunted, fixated adolescent to experienced, oedipal-exorcised man. The casting of Jaime Bell in the title role is a clever ploy to evoke real-life parallels, with articles-cum-publicity-materials already beginning to champion the erstwhile Billy Elliot’s ability to explore his “dark side.” We know Hallam is “dark” because the film opens with him spying on a young couple in the woods near his tree house—where he keeps a journal on his voyeurized prey, and where he worships at a shrine created for his late mother—before descending on them in a hat made from a raccoon and a face covered with sub-Marilyn Manson makeup (lipstick circles around nipples, et al.)

Hallam’s tortured because he believes his mother’s suicide was really a murder at the hands of his cold, scheming stepmother (Claire Forlani), named Verity—ironic!—the former secretary of his ineffectual architect father (Ciarán Hinds). In addition to homicide, Hallam also suspects Verity to be moving in on dad’s Highlands castle estate. When the woman finds the spy diary containing details of her liaisons with pop, Hallam in turn confronts her with his knowledge of her nefarious plot. And then, with absolutely no establishment or build up of sexual tension, and simply because the first act has to close with a dramatic turning point, Hallam and stepmom ravish each other. Naturally.

Hallam runs away to Edinburgh, where he tries to resolve his mommy issues. While homeless and wandering the streets he notices a beautiful young woman, Kate (Sophia Myles), who looks exactly like dear dead mom, follows her to the hotel she works at, and immediately obtains a job from her as kitchen help. For want of a setting even more suited to Mackenzie’s purposes of symbolism, Hallam holes up in a clock tower and uses a crack in its glass to spy on Kate with binoculars. He’s already tailed her, by the way, and skipped over the rooftops of her apartment building to view her through a well-positioned skylight. Naturally.

Soon a rivalry develops between Hallam, now a concierge, and Alasdair (Jamie Sives), a hotel higher-up, for the woman’s affections. Alasdair is regularly screwing Kate, but he’s married; Hallam watches their illicit romps through the skylight. He gets his chance at Kate himself when the two go out drinking and Hallam partially reveals his dark secrets when asked if he has a girlfriend. “She’s dead. Would you like to meet her?” he asks, and instead of looking around awkwardly for the nearest exit, Kate simply swoons at Hallam’s half-confession: “I love creepy guys.” Naturally.

After Hallam’s initial hesitation—he’s going to be doing it with his mom’s dopplegänger, after all—he and Kate consummate their relationship in one of the most unoriginal and facetious exchanges I’ve ever heard in a professional film, with Hallam listing famous euphemisms for penis and Kate doing the same for vagina while they giggle like ten-year-olds. The painful effort to construct an offbeat romantic scene here becomes just another typically ostentatious display of “naughtiness.”

Alasdair eventually discovers Hallam’s hideout and predilection for surveillance, and at first starts performing for the young pervert while having sex with Kate, then just tells her his competitor’s secret. Hallam is forced to confess all, and what follows is unforgivably ridiculous. CUT TO: Hallam entirely exposed but for the hands covering his genitals, reciting for Kate the truth about his life, including the stalking details. Shocked and hurt, she commands Hallam to leave her apartment . . . until a second later, when she asks him to stay: “You don’t have to go if you don’t want to.” Why she changes her mind, and why so suddenly, is never even hinted at; instead Kate rewards Hallam by putting on his mother’s dress, the one he carries around with him everywhere.

From these descriptions it might seem as if Hallam’s obsession carries a hint of deliciously twisted Hitchcock: a little Rear Window, a little Vertigo, even a little Psycho when our hero sports mom’s earring during bouts of loneliness. But so as not to get too sordid, so as to ensure the viewer need not feel too icky in sympathizing with Hallam (and Bell), Mackenzie time and time again softens the edges, dulls the blade, basically begs us not to be scared off. When Kate asks Hallam if he gets off on his voyeurism, Hallam quickly quells her fears. Of course not, of course not—he’s weird, but not that weird.

Say what you will about De Palma, but at least he goes all the way. Mackenzie, who also directed the tone-deaf faux-existential sexcapade Young Adam, wants both a pleasing coming-of-age tale and an uncomfortable psychosexual drama, and compromises both. When Hallam returns to the Highlands in full mascara to do away with stepmom in the same way he thinks she did his maternal beloved—drowning—his actions aren’t motivated in any plausible way. The problem isn’t that the scene is painfully corny, right down to a conspicuous plot contrivance (dad suffers a leg injury so he can’t come to the rescue); it’s that there’s no continuity of character. In other words, when it’s convenient to coddle Hallam, we’re desperately reassured of his fragile innocence, but when the third act needs a climax, without warning he’s a murderous psychopath. Though, unsurprisingly, even here Mackenzie cowardly pulls back from the consequences of his protagonist’s actions, letting him off the hook for an extreme impulse that in a tougher film would be more thoroughly investigated.

Stylistically buttressed by an opening credits cartoon reminiscent of Juno, a bludgeoning wall-to-wall indie soundtrack, quirky comic relief (including a wacky fellow concierge played by Ewen Bremner), and perfunctory over-editing, Mister Foe is middle-of-the-road dreck that manages no more than timid Freudian pop psychology and audience-pandering cop outs. It’s the kind of film that lacks the imagination for anything else but a final parting scene with Kate, who might as well pat Hallam on the head as she tells him to “look me up in five years time” after he “irons out those creases” of his. The final shot has Hallam walking toward the camera, smiling as Franz Ferdinand mindlessly plays into the closing credits. It’s the perfect musical accompaniment for such Brit mediocrity.