The Romance of Astrée and Céladon 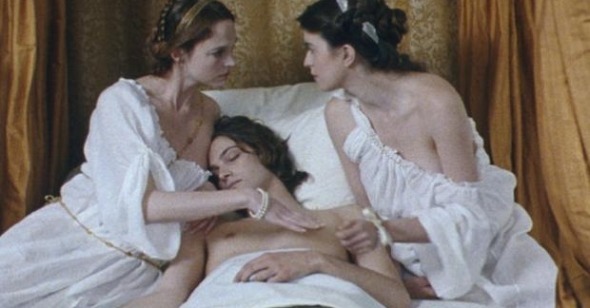 In a Green Shade Alone
By Nathan Kosub

Perhaps no one expects much of summer at the end of August. Public pools close with the first day of school. Parisians return to Paris. Each day is shorter than the day before, and spring is in the past more than the future. But summer is Eric Rohmer’s season, and The Romance of Astrée and Céladon is too late, for the director and for us.

It should be said that I have no patience for the Moral Tales and their male protagonists—for virtue as the trump card that self-righteous men play to win their peace of mind. Egotism rewarded for its cold devotion to a spiritual plane is not holy to me, regardless of the theology behind it. Holy is each mistreated bon vivant, from Maud (Françoise Fabian) to Claire (Laurence de Monaghan), subversive at the patriarchy’s fringe. But so long as they remained the objects of protagonists’ desires, the women could not be protagonists themselves, and Rohmer was more head than heart.

A Good Marriage (1982) was the turning point. For the first time, a woman was the hero, really the hero, and it began the longest winning streak in movies. The Romance of Astrée and Céladon begins with a dedication to Pierre Zucca, a still photographer on the sets of films directed by Jacques Rivette and François Truffaut. Zucca died in 1995. A preface heralds The Romance of Astrée and Céladon as an adaptation of author Honoré d’Urfé’s 1610 tale of shepherds, nymphs, and Druids in fifth-century Gaul. “Sadly, we have had to move their story from the Forez plain, now disfigured by urban blight and conifer plantations, to another part of France whose scenery has retained its wild poetry and bucolic charm.”

The story is simple enough. Two lovers suffer from the perception of a betrayal that compels Astrée (Stephanie Crayencour) to tell Céladon (Andy Gillet) that she does not want to see him again until she says so. Grief-stricken, Céladon throws himself into a river. In the eyes of Astrée, the village, and family, he dies. He doesn’t die, of course, but washes away, “below the gorge.” A woman finds him, restores him to health, and, eventually, Astrée.

But why go back to the seventeenth century to tell a tale of love? Why lament the Forez plain when there is yet such natural beauty in the world as cinematographer Diane Baratier finds here? Has it been so long since The Green Ray (1987), when Jules Verne’s story came to life without the aid of an ornery introduction? “The heroine is a fairy-tale heroine,” says a grey-haired tourist in earshot of Delphine (Marie Rivière) at the end of that film. “She’s as simple as Cinderella or Snow White.” Delphine is the heroine, a modern woman— done of the great women in movies—but she is Cinderella, too, without castles or candlelight.

Or perhaps it is back to God—Moral Territory—in Astrée and Céladon, to make a case for monotheism. A druid priest (Serge Renko) argues that Roman mythology obscured the subtler single deity of his pagan faith. There can be only one god; otherwise “goodness must be different from goodness, which is impossible.” Elsewhere Lycidas (Jocelyn Quivrin), the righteous husband, argues for the union of souls through the act of love, while minstrel Hylas (Rodolphe Pauly) counters that respectable shepherdesses don’t run around in men’s clothes. There are shepherds dressed as shepherdesses, at least, and a kiss in the rain. The end of the film is perfect, a physical embrace so rapturous as to prove Lycidas correct. But do we want him to be? It is the same as Jean-Louis (Jean-Louis Trintignant) forever appealing to Pascal in My Night at Maud’s: men arguing with men while women suffer.

What is a romance that the twenty-first century cannot share? Is it really an excuse to climb back into bed with the Jansenists, dull souls? In L’Ami de mon amie (1987), it is not fate that brings Blanche (Emmanuelle Chaulet) and Fabien (Eric Viellard) together, but the structural layout of the planned suburban city of Cergy. And still, in that city, Blanche and Fabien find a path into nature, and together outpace the drifting smell of fish sandwiches and French fries from the lake where lovers swim. Eventually they settle in a quiet glade with sun and the wind in the trees: a pastoral postcard.

In 4 Adventures of Reinette and Mirabelle (1987), Reinette (Joëlle Miquel) laments that her neighbor, a farmer, will cut the wild grass for his goats. The camera pans softly skyward from a pear tree, which Reinette tells Mirabelle (Jessica Forde) is a hundred years old. But in the morning, the farmer lets the girls feed chickens and goats and say hello to Diane, the horse. He shows them strawberries, radishes, and endive. The farmer is wrong about the forecast for rain, but even with the wild grass cut to pieces, he is hardly some nightmare of modern man.

By comparison, The Romance of Astrée and Céladon, like Rohmer’s most recent films—Triple Agent (2002) and The Lady and the Duke (2001)—is a dated costume drama. “Neither photography nor painting can reproduce the world existing in time,” Rohmer once said. If the prettiest shots in The Lady and the Duke are paintings of the moon, they are paintings only, pretty and cold. Where do relics belong but a shrine?

Both Triple Agent and The Lady and the Duke end in harm—the first with both protagonists dead, the second with the execution of the protagonist’s ex-lover—and isn’t that the inevitable conclusion? Death? Far enough down the line, death is always the last word. Movies are for the living, or should be. So where is Cergy in The Romance of Astrée and Céladon? Where are the colorful wind sails on a man-made lake? Where is Fabrice Luchini—the most underrated of Rohmer’s men—with his quips about cover girls? Even if Rohmer himself never cared about fashion, the actresses he cast certainly did.

It is no sin to go out gracefully, in some faraway dream of the mind. But life is much farther away in The Romance of Astrée and Céladon than it used to be for Eric Rohmer, and ultimately, in light of so many bright examples, too far away for me. Watching these half-dressed nymphs speak to men of love in a forest that isn’t there is pageantry in place of simpler truths, truths that no director has put more plainly, or with more assurance, than Eric Rohmer. Certainly no one who makes movies means more to me.

In A Good Marriage, a young woman speaks with the mother of the protagonist at a birthday party for a friend. “I’ll bet you were a real flirt,” the woman says, thinking of youth. “Isn’t everyone?” the mother replies. But everyone is, it’s really true. Everyone is exactly who she wants to be, here and now, and we do not need virtue, the past, or God to explain her. She alone is enough. Once, if not now, Eric Rohmer agreed.