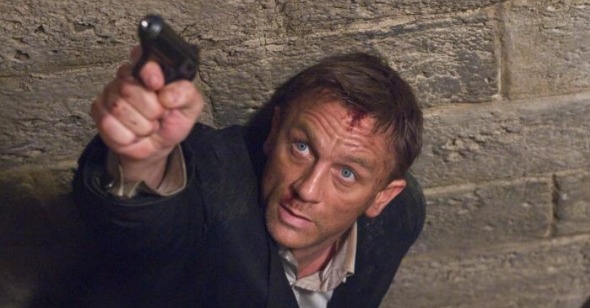 Jerked Around
By Andrew Tracy

The problem with probing each new Bond entry for sociological significance is that the series has always actively contributed to the tenor of its present moment rather than simply reflecting it, as all good capitalist enterprises should. Popular entertainment does not simply reflect tastes, it deliberately seeks to shape them; thus the current public’s supposed appetite for “darkness” and “edginess” derives at least as much from the determination of megabudget, market-swamping movies to provide those qualities in spades as from any palpable desires or fears on the part of the milling herd. We can be thankful at least that the Bond “mythology” has always been more a matter of gestures and rituals than the brooding, tortured “essence” at the heart of a certain other caped-n’-cowled franchise—our wish-fulfillment, product worship, and juvenile impulses need not be intruded upon by any pretensions to psychological, political, or philosophical depth.

So the unfortunate failure of Quantum of Solace certainly can’t be ascribed to an overdose of capital-s Seriousness, the Paul Haggis-ized shout-outs to rapacious corporate greed—embodied in the faux-environmentalist kingpin Dominic Greene, warping Mathieu Amalric’s endearingly froggy features into malevolent mode—undernourished Bolivian peons, and U.S. governmental connivance with dictators and terrorists notwithstanding. To paraphrase Stanley Kauffmann, such frills are just serious enough to be entertaining, not enough to be serious. Where the film fails is in a regrettable abandonment of the (ever more surprising in hindsight) narrative integrity of Casino Royale, and in a sidelining of the brawny enigma that that first “reboot” (bloody word. . .) took as its obsessive focus and fascination.

It’s strange that the rather odd-looking, liver-lipped fellow who passed unremembered through such dismal fare as Tomb Raider and Road to Perdition these many moons ago should emerge as a major erotic icon of the age, yet Daniel Craig’s essaying of 007 has fundamentally redirected the series’ de rigeur lasciviousness. Where Pierce Brosnan, in looks and demeanor both, was simply a frictionless plane to ease audiences smoothly back into a temporarily dormant franchise, the selection of Craig as Bond was accompanied by an unusually assertive foregrounding of his offbeat physicality and bearing. From the heavy use of Craig’s visage in the opening title sequence—a rarity in Bond films—to his gradual evolution throughout Royale from a largely silent or (at best) monosyllabic embodiment of violent potential to an articulate, self-awaredly arrogant and ultimately vulnerable half-human being, Casino Royale took the actor, rather than the character, as its foundation. The reactions to Craig from both men and women—onscreen and off, I’d venture—had far more to do with his own innate qualities as presence rather than his better or worse suitability for the role. Thankfully, director Martin Campbell and the behind-camera team allowed plentiful time to contemplate Craig going about his Bondian business: the typical parade of exotic locales were actually allotted a sustained sequence each, allowing for something resembling a genuine, developing story to take shape, and perhaps even a ghost of felt emotion in Bond’s relationship with the clearly doomed Vesper Lynd (Eva Green).

Vesper’s memory continues to linger over Quantum of Solace, as well as the new, Craig-adjusted formula that evidently struck a chord: more “down to earth” plots, tougher, bloodier physical violence, and intermittent nods to Bond’s tragically stunted moral and emotional development. This time out, however, the Brosnan-schooled screenwriting team of Neal Purvis and Robert Wade has merely aped that realistic gloss while reverting back to their old, dire habits. Where Casino Royale limited its globetrotting to a circuit round Madagascar, Nassau, Montenegro and Venice, this time out Bond and company are brutally shunted back and forth from Siena to Haiti to Austria to Bolivia and points in between, manhandled into scenes whose only purpose is to end so that we may proceed to the next.

None of this is aided by the producers’ head-scratching helming choice of Marc Forster (the kind of director whose name is fated to elicit a response of “oh yeah, that guy,” as half-forgotten memories of Monster’s Ball or Stranger Than Fiction rise unbidden). Though his action game raises slightly after a graceless opening car chase—benefitting from the ace stunt and camera crew as they stage an exciting foot pursuit and midair rope battle among the Siena rooftops and a brief, impressively brutal set-to in a Port-au-Prince hotel room—Forster’s attempts to add moments of pause and quiet ring louder, and clunkier, than any of the numerous explosions. A leisurely edited gun battle sans audio intercut with a performance of Tosca; an almost inaudible monologue by heroine Camille (the delectable Olga Kurylenko) as she relives her family’s murder while trapped in a blazing and rapidly collapsing building; and the whimper of a final scene where Bond, apparently at peace with his bad self, finally sets himself free of Vesper’s painful memory—Forster’s attempts to imprint his signature result only in an ugly scrawl.

The final tally, then, results in the shortest Bond film in memory (105 minutes) that feels significantly longer than the record-setting running time of its immediate predecessor. This time-warping haste is not only unseemly, it’s somewhat inexplicable considering the enthusiastic response to the first Craig outing. The Casino team’s faith that the audience would stay with them during the long poker table showdown between Bond and Le Chiffre—no matter its punctuation by increasingly silly assassination attempts—was thoroughly vindicated by the film’s popular and critical embrace; why then the need to yank Bond around like a mere action puppet (instead of an exemplary action puppet) yet again? No overlay of maudlin dialogue and wistful drinking sessions can disguise the fact that the Quantum perpetrators don’t understand what audiences responded to in Craig’s Bond: the pleasure in just watching him be on screen, not so much adding depth to a character who couldn’t survive underneath the weight of reality as creating an immaculate sheen of movement, gesture, and bearing. Craig and Bond will survive this already-smash hit no problem, of course, and one only hopes that the creators, once settled down from their pathological, surface-level tweaking of the old standbys (gunsight walk-and-fire at the beginning from now on, for God’s sake), will rediscover the eminently simple reasons the last film felt new in the first place.