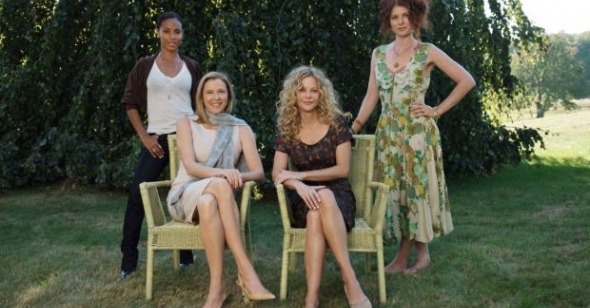 Saks and the City
By Chris Wisniewski

Why now? Diane English, best known as the creator of the Emmy-winning series Murphy Brown, has spent well over a decade trying to get a remake of The Women into theaters. Since she first started shopping her script around in the early Nineties, the project has attracted the interest of some of Hollywood‚Äôs top female talent, as well as that of director James L. Brooks, but English never succeeded in getting a Hollywood studio to bankroll a film about marriage, friendship, and adultery with an all-female cast. She eventually decided to produce it independently through Picturehouse and direct it herself (her first time behind the camera), and even then, Warner Brothers, which absorbed Picturehouse while The Women was in production, was prepared to dump it into 500 theaters without a serious marketing push‚Äîuntil the Sex and the City movie became a runaway box-office hit.

For English, The Women is undoubtedly (and mysteriously) a labor of love, but for Warner Brothers, its 2000-screen rollout is a cynical calculation that the same female audiences who turned out for The Devil Wears Prada and Sex and the City‚Äîstarved of decent movies actually made for them‚Äîwill choose to waste their hard-earned money on this dull and pedestrian bit of moviemaking instead of, say, contributing it to Hillary Clinton‚Äôs debt relief. This is the same brand of cynicism that landed everyone‚Äôs favorite hockey mom on the national Republican ticket: women will be so happy to see themselves finally represented, on the stump or onscreen, that they won‚Äôt really care about the substance of what they‚Äôre seeing‚Äîthe candidate doesn‚Äôt have to be worthy; the movie doesn‚Äôt have to be good; they simply have to be.

Every once in awhile, a culture gets the movie it deserves, and The Women may well be the perfect film for our Sarah Palin political moment. But just because women have been as frequently ignored by Hollywood executives as they have by political powerbrokers, that‚Äôs no reason to think they‚Äôre either stupid or desperate enough to be hoodwinked by Warner Bros' transparent opportunism. Whatever their flaws, Sex and the City and The Devil Wears Prada were funny and fun; if The Women fails to replicate their box-office success (and I suspect it will, indeed, fail) it won‚Äôt be because those audiences have disappeared‚Äîit‚Äôll be because The Women is, quite simply, a lousy movie.

George Cukor‚Äôs 1939 film is not a lousy movie (on the contrary), but as a piece of raw material it does pose some serious challenges, particularly in its prewar treatment of divorce, marriage, and social class. The women in the original Women are, for the most part, wealthy socialites who married for love, see marriage as a partnership of relative equals (unlike their mothers before them), and spend most of their time gossiping, shopping, and socializing. Based on a play by Clare Boothe Luce, The Women indulges in a lurid fascination with a moneyed leisure class that doesn‚Äôt exist in the same form today as it did towards the end of the Great Depression (Cukor‚Äôs women are not, for all their flaws, anything like the Real Housewives of New York City), and the generation of women it depicts is a transitional one‚Äîcaught historically between feminism‚Äôs first and second waves.

English has kept the basic plotline of that film, while giving it a post-third wave update. Mary Haines (Meg Ryan) is a busybody Connecticut wife-cum-fashion designer whose dashing and successful husband has taken up with the perfume saleswoman at Saks Fifth Avenue (Eva Mendes, stepping in for Joan Crawford). Her best friend, Sylvie (Annette Bening), edits a women‚Äôs magazine and, because she put her career first, never married. Rounding out this crew are an oversexed lesbian writer (Jada Pinkett Smith) and a mother of four girls (Debra Messing), who is expecting baby number five. English has whittled the original‚Äôs core cast of female friends down to four on the Golden Girls/Sex and the City model, but Smith and Messing‚Äôs characters are almost entirely superfluous, suggesting one of English‚Äôs biggest conceptual failures‚Äîunlike the Sex foursome or the original Women women, who seemed to inhabit a shared social world, this group is so disparate that we have no real sense of why these women are friends at all. Smith‚Äôs sassy, sexy Alex, for example, never transcends stereotype‚Äîwhen Messing says that she‚Äôs hoping for a boy, she protests, ‚ÄúDon‚Äôt we have enough of those?‚Äù (Get it? Because lesbians don‚Äôt like men!)‚Äîand her inclusion smacks mostly of tokenism. At one point, Alex drags the others to dinner at an exclusively lesbian restaurant, and I was left wondering, first, if any such places exist in real life (seriously, I don‚Äôt think they do), and second, why any of these women were having dinner with each other in the first place.

‚ÄúWhat do you think this is,‚Äù Mary asks her mother (the great Candice Bergen) over lunch, ‚Äúsome kind of 1930s movie?‚Äù If only it were. Instead, English has skewed too far in correcting the outdated gender politics of her source material. Her direction, aside from an uninspired early sequence that treats a shopping excursion to Saks‚Äô like a first-person video game, is acceptably proficient. Surprisingly, her real missteps are in the writing. Politically, she‚Äôs covered her bases‚Äîthe likeable everywoman, the career woman, the mother, the black lesbian‚Äîbut narratively, she has completely elided the conflict. The Women version 2008 amps up the girl power angle at the expense of the intrigue. In the Cukor film, Sylvia (Rosalind Russell) is a conniving gossip who is as much Mary‚Äôs (Norma Shearer) rival as her friend, but here, Sylvia and Mary love each other and only have a falling out when English contrives an impossible situation for Sylvia and then, improbably, allows Mary to judge her, most unforgivably, for a bad decision (this narrative strategy resembles the Miranda-Carrie meltdown that sunk the Sex and the City movie). These women have basically been declawed. Even Bergen, who scores the movie‚Äôs best line, a zinger about another woman‚Äôs face lift, ends up getting plastic surgery herself later in the film, which feels like an equivocation, as though English is apologizing for the snark‚Äî‚ÄúYou gotta do what you gotta do; we‚Äôre all in this together, girlfriend!‚Äù

English takes the focus off of Mary‚Äôs marriage and instead places it on Mary herself. She needs to put her needs first, work on her career, and repair her relationship with her daughter (another contrived attempt to invent some sort of conflict in the film), and then, we can rest assured, she will get her husband back. This is less a story of adultery and divorce than of self-discovery, and Mary‚Äôs eventual reconciliation with Stephen is a fait accompli. Forget the other woman. Joan Crawford‚Äôs Crystal Allen was a magnificent creation‚Äîa social climbing villain with sex appeal and just enough charm; Eva Mendes‚Äôs Crystal Allen is barely in the movie. Cukor‚Äôs film was a battle between two formidable foes vying for the affection of a man, the decent socialite-mother and the sexpot upstart; English‚Äôs is a story about girlfriends. The taglines say it all. Cukor‚Äôs: ‚ÄúIt‚Äôs all about men!‚Äù English‚Äôs: ‚ÄúIt‚Äôs all about‚Ä¶the women.‚Äù Whatever else you can say about Warner Brothers, they aren‚Äôt guilty of false advertising. It is, indeed, all about the women. And they‚Äôre really fucking boring.