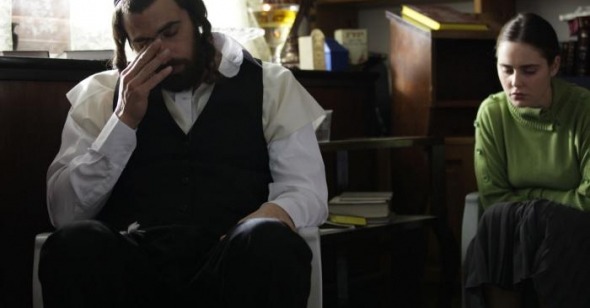 Close for Comfort
by Farihah Zaman

It is easy to get caught up in the atmosphere of Rama Burshtein‚Äôs feature debut, which is largely set in the homes and meeting places of the tight-knit Israeli Orthodox Jewish community, always quietly bubbling with constant conversation or prayer. Its rituals are exciting to us outsiders not because of their eccentricity but the rarity with which they‚Äôre shared with the public. However, while Fill the Void paints a painstaking portrait of these people and their culture‚Äîwhich New York native Burshtein adopted as her own several years ago‚Äîthe film is no ethnographic study. It is a drama that redefines love by offering a conception of romance and marriage shaped by the unique cultural perspective of its characters. The film‚Äôs narrative is thus deepened rather than upstaged by its exotic social context.

Shira (Hadas Yaron) is a sheltered member of the Tel Aviv Hasid community, in which her father is a well-respected rabbi. Now that she is ‚Äúof age,‚Äù and her friends are gradually being matched to appropriate-on-paper mates, Shira is anxious to marry. However, the arrangements for her wedding are put on hold when her sister Esther dies during childbirth, leaving behind her husband, Yochai (Yiftach Klein), and newborn son Mordechai. After a few months pass, Yochai is encouraged to remarry‚Äîas in many religious communities, creating and nurturing a family is of paramount importance here, as faithful families form the building blocks of a larger network of support. When it becomes increasingly likely that Yochai will be matched to a divorc√©e in Belgium, Shira‚Äôs mother, Rivka (Irit Sheleg), becomes distraught at the thought of her only grandchild so far removed from her, and suggests that the still-grieving man marry his young sister-in-law. At first both are opposed to the union, but the seed having been planted, Yochai quickly warms to the idea, leaving Shira deeply conflicted about her feelings on the matter. She is closer to Yochai than any other young men in the fold because non-family members of the opposite sex are kept at arms‚Äô length; he has become a part of her household, but changing her affections for him from sisterly to romantic seems unthinkable.

At this point the expected thing would be for Shira to be commanded to marry Yochai according to some traditional duty to her parents, nephew, and even her deceased sister‚Äîcoercion often drives the dramatic conflict in films about marriage in conservative religious groups. In Burshtein‚Äôs film, however, the choice is left entirely up to Shira, who, young and inexperienced, is agonized by the thought of failing her community because she could never take her sister‚Äôs lover as her own. Various friends and relatives weigh in on the matter, but this only serves to confuse her further. To people who have not grown up in a world that embraces arranged marriage, the idea of others being so involved in Shira‚Äôs burgeoning love life might seem intrusive. However, while options are limited for both Shira and Yochai in their small, strict world, the community‚Äôs involvement in her decision is a far cry from making the decision for her, and the significance of this difference is what gives the film its identity. The dramatic tension is driven by the protagonist‚Äôs inner conflict, by the subtler effects of pressure and expectation rather than outright oppression.

The right of nearly any member of the community to comment and provide guidance on another‚Äôs most intimate matters highlights the tight social structure of the Hassid in general. The filmmaker routinely breaks away from the central drama in order to weave in depictions of platonic relationships that seem as crucial as the romantic ones: father and daughter, mother of the bride and mother of the groom, the rabbi with his congregation, and so on. The film opens with lengthy scenes of interactions between multiple smaller characters‚Äîfirst in the grocery store, the unlikely place where the question of Shira‚Äôs match is raised, then in the temple on Purim, where the men share their woes with the Rabbi, providing a peek into their day to day struggles. Later, the head rabbi pauses a serious conversation with Shira and her father to assist a lonely elderly woman in her quest to buy a new stove, a scene that speaks volumes about the community, both in its dry, wholesome sense of humor and the suggestion that seemingly small thing also falls into the purview of religious leadership in order to make sure each member of the congregation is cared for. Also indicating the community‚Äôs closeness is the fact that Rivka‚Äôs separation from her grandchild Mordechai is considered a tragedy rather than an inconvenience, one that must factor into Shira‚Äôs consideration.

The personal ramifications of Shira‚Äôs decision in such a community, beyond the disappointment of her parents and potential judgment of her neighbors, are also deeply tied into ideas of love and happiness molded by that community. There is a turning point in the film when it seems as though Shira has realized she may be capable of seeing Yochai as a partner rather than as kin, but something continues to hold her back. She asks him how he felt when he first married Esther, how excited they both must have been as they began their new life together; and then she explains to him, her voice breaking with emotion, that this shared mystery is what she would be giving up, the chance to be with someone for whom everything about the union would be as fresh and thrilling as it would for her. This moment is revelatory for both the audience and for Yochai. Those in a more liberal community usually marry as a way of formalizing a commitment already made, to say, in a sense, ‚ÄúI have decided to love you.‚Äù Those in more conservative communities are saying, ‚ÄúI have decided that I will love you.‚Äù

While the film‚Äôs setting and narrative are always engaging, Burshtein‚Äôs visuals are inconsistent. Her work is most compelling when the characters‚Äô faces fill the frame, but wider shots seem to lack the same purposeful composition. Also, the color palette of the film is as gritty and washed out as the depiction of its characters is rich and warm, and the contrast is jarring. The multiple scenes in which the men sing passages to mark rituals such as Purim and Sabbath lovingly reinforce the importance of the communal experience to the Hassid (reminiscent of the secular group singing in Terence Davies films); the nondiegetic music, however, is less successful, mostly centered around a modernized but faintly hokey devotional song that is acceptable the first time but tiresome by the fourth or fifth. There is also a lack of clarity as to what, exactly, made Yochai change his mind about marrying Shira; this buttoned-up masculine man goes from complete refusal to downright fervency.

Luckily the performances are so convincing, so beautifully unaffected, that it is easy to overlook the characters‚Äò half-baked motivations. In one scene, Yochai stands facing Shira in the garden of her parents‚Äô home, breaking an unspoken physical barrier for just a moment‚Äîhe is so full of barely restrained longing that the air is practically quivering between them. Klein depicts Yochai‚Äôs wounded hunger fully and with few words, and the look on Yaron‚Äôs face is palpably expressive of both excitement and fear; we believe that something has indeed changed between these two characters without being able to determine exactly how and why. This moment perfectly reflects the film‚Äôs approach to narrative, which runs deep rather than broad‚Äîso deep as to sometimes induce purposeful claustrophobia.