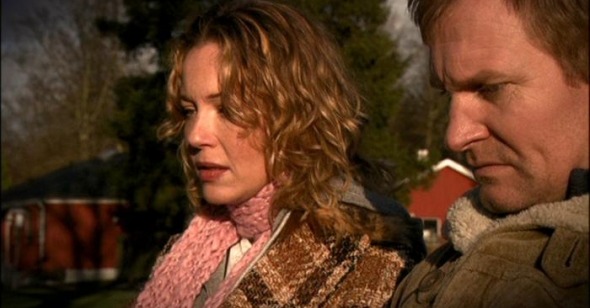 A Woman's Touch
by Kristi Mitsuda

Next to the Western, the war film is the genre I most despise. No matter the criticism implicit in their excruciating descriptions of carnage (Black Hawk Down) or outward veneers of protest (Platoon), war films often ultimately turn out self-aggrandizing, reinforcing war as deeply purposeful. Even David O. Russell’s hysterical Three Kings, an ostensibly irreverent debunking of moralistic missions and selfless soldierly stoicism, ends up circling back around to this affirmative way of thinking, its triumvirate surrendering the Kuwaiti bullion in order to deliver Iraqi refugees to safety. How much my distaste for the genre has to do with the fact of my gender I’m not entirely sure, but, given no place to insert my subjectivity amidst such testosterone-fueled proceedings, I don’t doubt exclusion plays a part. So perhaps it’s no surprise that the only specimen of the genre to resonate for me in recent years stems from a woman’s perspective. Granted, Susanne Bier’s small, unpretentious bedroom drama Brothers isn’t exactly what comes to mind when one considers cinematic renderings of war’s unspeakable terrors, but this its willingness to stray from well-worn patterns is what makes the difference.

Interestingly, Brothers has much in common with another female-helmed contribution to the cause, Lynne Littman’s 1983 nuclear fallout nightmare Testament (whose scarily relevant brilliance Reverse Shot has long been striving to bring to light), which likewise focuses on the trickling down of warfare into the domestic sphere. Both zoom in on the personal and circumscribed experience of a single family, and in particular the female head of it, rather than presenting the larger picture and, though lacking in attention-getting special effects, forfeit none of the horror; the minimalist structure forces realistic contemplation more dreadful than faraway speculation. Since many of us will never experience the front lines, these movies show us the ugliness of war’s effects as they might manifest in our backyards. Like its almost-forgotten predecessor, Brothers is deserving of accolades for rethinking the genre but is, sadly, unlikely to garner anywhere near the same amount of fawning adulation as that which greets high-profile macho counterparts like Saving Private Ryan.

Alternating between scenes in Copenhagen, where a family of four—Michael (Ulrich Thomsen), Sarah (Connie Nielsen), and their two daughters (the delightfully unaffected Sarah Juel Werner and Rebecca Logstrup Soltau)—is based, and Afghanistan, where Michael, serving in the Danish army, is deployed, the audience is privy to both the private realm of the home and the public one of the battlefield. Though the film charts Michael’s hardships, it gives greater emphasis to the oft-neglected delineation of emotional sea changes taking place in his wife and children during his absence. Much of the latter has to do with Sarah’s relationship with Michael’s younger brother and black sheep of the family, Jannik (a charmingly obstinate Nikolaj Lie Kaas), whose increasing maturity and sense of responsibility to them alters the dynamics of the family unit.

Thankfully, Brothers denies simple melodramatics: Sarah and Jannik’s newfound reliance upon one another plays out in an astonishingly adult way, avoiding the pitfalls (think Legends of the Fall) one would associate with such a delicate matter. This is indicative of Bier’s consistent and careful management of material, as she adeptly avoids sentimental knee-jerk bravado at every perilous turn. The Mel Gibson vehicle We Were Soldiers, provides a good counterpoint; where its hamfisted traversing of domestic and military spaces of war, utilizes the major hallmarks of self-congratulatory depictions—swelling music, grandiose speeches, and solemn voiceover—to regressively reclaim the disaster that was Vietnam, Bier’s downplays and, in so doing, achieves an authentic poignancy. Knowing we’ve seen this all before and that implying, rather than milking a scene for its melodramatic worth, has more emotive grace and gathering power, her naturalistic Dogme ’95 tendencies relay events with a startling simplicity. Two moments in particular, which in any other movie would’ve constituted twin earth-shattering dramatic poles, here play out in an introverted fashion more haunting for their self-possession. When two military officers arrive at Sarah’s door to inform her of Michael’s (presumed) death, the scene unfolds in silence, through an agonizing exchange of looks. Later, learning of his survival, the camera moves to encompass her point-of-view as she watches, through sliding glass doors, Jannik, playing with the kids outside. This restraint proffers an enticing intimacy befitting such life-altering occurrences while leaving room for suggestion.

When Michael returns to find himself and his home changed—the formerly gentle Robin Williams-like twinkling of his blue eyes now replaced by a cold, hard, diamond-like deadness—the contrast between the bliss of before and the present tentativeness fills the house with tension. His enforced brutality to another, weaker soldier, during his time as a POW seeps into his psyche and segues into domestic violence. And the ending offers no closure: The final image, a long shot of Michael breaking down in tears as Sarah gives him an ultimatum—tell her what happened in Afghanistan or she and the kids are gone—illustrates that the recovery process will be arduous, continuous. Although not overtly politicized, Brothers’ concentration on these shock waves registering through one household issues a lament, a sad song for atrocities irredeemable by bombastic displays of cathartic drama or last-minute rescues. It leaves one with a quiet, nagging sense of loss that isn’t easily shaken off.