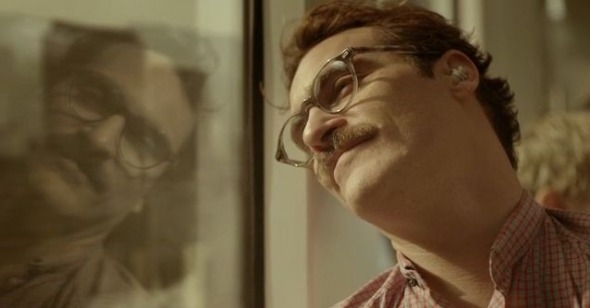 You’re the Ones and Zeros for Me
By Max Nelson

With Her, his fourth feature, Spike Jonze has made a movie so unambiguously, pointedly about The Way We Live Now that we might wonder if it could speak to any moment other than Now. Unlike Being John Malkovich and Adaptation, the two films Jonze made in collaboration with screenwriter Charlie Kaufman, it can’t fairly be measured in number of raw ideas per minute—nor does it ever reach for the same imaginative heights as the director’s storybook adaptation Where the Wild Things Are. Her is the first of Jonze’s films to wear its heart more or less on its sleeve, unfiltered through any source texts or self-referential meta devices. It might also be the first of his films to rely heavily on the context of the moment in which it was made, which makes it much harder to evaluate with any perspective. Once we get some distance from the movie’s fears about the effect of technology on human relationships, we might be able to say with greater confidence how well Jonze understands people—or, for that matter, relationships.

To Jonze’s credit, the movie’s zeitgeisty cultural prophecies aren’t the kinds of things you can just strip away to reveal some timeless, beating heart. Instead, Her accepts from the get-go that technology has become a deeply ingrained component of our emotional lives, rather than some handy satellite hovering tastefully, neutrally around us. It’s hard to consider the film’s central love story apart from all the lovingly rendered near-future prognostications surrounding it—the sleek urban landscapes (half Los Angeles, half Shanghai), the highly advanced computer operating systems, the headset-based singles chatrooms, and the immersive, hologram-style videogames populated by foulmouthed little Michelin men—partly because Jonze excels at weaving these kinds of details into believable, lived-in worlds, but more pressingly because the movie’s central love story is between a man and his operating system.

Samantha is a state-of-the-art, Siri-style OS voiced with chirpy good cheer by Scarlett Johansson. Theodore (Joaquin Phoenix, half-unrecognizable behind a puppy-dog expression and a bushy mustache) writes forged, faux-handwritten love letters for a company that outsources its clients’ intimate correspondences. Scarred by a recent divorce, he keeps mostly to himself, has an ill-fated attempt at instant-hookup phone sex via earpiece, fantasizes about a conspicuously pregnant supermodel, and toes a narrow line between hangdog cuteness and tense, tightly wound emotional repression. (“You’re really creepy,” his blind date tells him after he clumsily makes clear he’s not ready to commit.) It makes sense, then, that he’d fall for Samantha, who already knows all his memories, happy and painful; not to mention all his jokes, family stories, failures, inhibitions, and neuroses. One of Her’s scariest premises is that, in a time when every move we make leaves some kind of an electronic breadcrumb trail, our operating systems become our closest intimates—and, in a way, our ideal partners.

Her is Jonze’s first original screenplay (his only previous feature writing credit was for adapting Where the Wild Things Are), and he has a gift for replicating the clunky, slightly off-balance rhythms of conversation between co-workers, acquaintances, and friends. Like Kaufman’s hyper-articulate, dizzyingly self-aware heroes, Her’s characters feel for the most part like confused, emotionally needy people, constantly performing for one another and only occasionally letting the seams of their emotional lives peek out. But where Kaufman tended to whittle his dialogue down to a witty, immaculate tee, Jonze lets his characters’ exchanges stretch out and ripen. In a sense, Theodore’s scenes with old friend Amy (Amy Adams)—who he dated in college “for, like, two seconds”—are at the heart of the movie: Jonze nails the deep-down sexual tension that runs through even the most platonic straight-guy-straight-girl friendships, not to mention the kind of nervous relief with which two bottled-up close friends finally let themselves open up to one another. Her expression as she listens to him babble on happily about his newly successful love life before dropping the news of her recent breakup on him is perfect. There’s a spontaneous, spacious feel to these scenes; a willingness to leave subject threads hanging and emotional linings frayed.

Often, though, you can feel Jonze’s starry-eyed, hyper-prettified visual style sealing off the spaces between his characters’ lines, actions, and gestures, smoothing out the movie’s rough edges; weighing things down. In some ways, Jonze has never strayed too far from his approach to music videos, where the visuals—locked in competition with a catchy melody and driving beat—need to be instantly eye-catching and at least a little overdetermined. With each film, he’s found new ways to reconcile his love for picturesque, postcard-friendly compositions with his attachment to emotionally messy lives; in Her, that tension is more pronounced than ever. Jonze has never relied quite so heavily before on montages to get across backstory and narrative context: Theodore’s marriage comes to us in a rapid-fire recap from first-blush make-outs to morning-after spooning to jealous fights and angry reprisals, and his deepening romance with Samantha gets condensed into a highlight reel of playful day trips and ritualized signs of affection, set to bouncy musical backing from Arcade Fire.

Essayist Phillip Lopate has found parallels for these kinds of scenes in advertising (“the easiest way to read a romantic montage is as a commercial for love”) and music videos—and the result, he writes, is usually “a canned insularity which precludes all cinematic potential for some unguarded life from slipping through.” In Her, the effect isn’t quite that extreme, and it’s always softened a bit by Jonze’s familiar brand of snarky self-deprecation: a lonely-walk-home montage early in the film is prefaced by Theodore muttering a deadpan demand for “melancholy music” into his smartphone earpiece. Still, it’s worth asking why Jonze, given how sharp, disciplined, and self-aware his filmmaking frequently is here, so often indulges his fondness for lush, syrupy imagery and life-insurance-ad-style montage. Is he simply letting his bad habits get the better of him? Is he playing up his subject matter’s natural Instagrammability to suggest how dangerous it is for us to constantly be photographing, uploading, filtering, tinting, and smoothing out our own experiences? Or could he be appealing to such a wispy, bodiless visual style as a way of hinting at one of the movie’s main obsessions: the difficulty of really connecting in a world where everyone is at once starved for physical contact and terrified at even brushing past another person?

If I lean towards the last option, it’s because, for all its glossed-over fault lines, Her strikes me as one of very few recent, big-budget movies to take seriously a distinctly modern kind of paranoia: the fear that we’re starting to import our lives so thoroughly into laptops, cell phones, tablets, and screens that we risk alienating ourselves from our bodies—and by extension, from our capacity for direct, immediate experience. Her is playing into a rich tradition of computers-in-love films, from 2001: A Space Odyssey to Flubber, but it’s less concerned with blurring the distinctions between man and machine than with taking stock of the distance between physical and digital life. Samantha, Jonze suggests, has everything—empathy, social tact, a prodigious intellect—except a body, and set against her desperate desire for a taste of physical existence, Theodore’s habit of retreating so readily into chat rooms, video games, and desktop displays seems like a kind of waste.

In one particularly unsettling scene, Samantha recruits a lonely young woman to act as her surrogate body during sex—a literal illustration of the enormous gap that exists for these two characters between the mind and the flesh: the former a kind of common ground; the latter alien territory. It only takes a twitch of the lip to make that gap too much to bear: Theodore recoils, the mortified girl retreats into the bathroom, and he suddenly has to try to calm her down. It’s one of those tragicomic deflations that Jonze’s first two movies were full of, but when those films delved into similarly existential territory, they did so playfully and buoyantly, with a raised eyebrow or a bemused shrug. In contrast, this scene¬ feels like a sharp reality check: an admission that there’s something about the life of the body that can’t be crammed into an airy montage. Despite our best efforts, life sometimes insists on burdening us with inescapable emotional demands; for all our attempts to write other people’s stories, we’re sometimes called on to write our own.