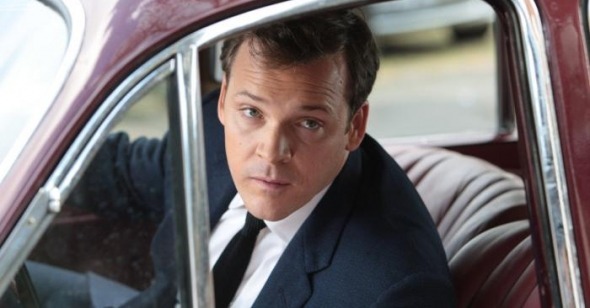 Flunking Out
by Sarah Silver

There is little room for palpable emotions to flourish under the gloomy, brushed steel skies and oppressively muted palette of An Education. This highly stylized tale of a naïf taken in by the lies of an older man in prefeminist, pre-Beatles England is decked out like an overlong episode of Mad Men and places stunning costumes and impeccable art direction above sympathetic characters and relatable situations. Based on an autobiographical article in a literary magazine by British journalist and interviewer Lynn Barber, the film, adapted to the screen by Nick Hornby and directed by Lone Scherfig (Italian for Beginners), was in the can before the full memoir was even published, in June of this year. The result is a story spread as thin as marmalade over melba toast in the penny-pinching Twickenham household where Jenny (Carey Mulligan), our 16-year-old heroine, is being raised by her uptight parents (Alfred Molina and Cara Seymour). Jenny is eager to escape her middle class, provincial life and get to Oxford where, she says, “I can read what I want, wear black, and listen to Jacques Brel.” Mulligan’s playful facial expressions and doughy dimples go a long way towards making such cringe-worthy dialogue bearable, but the film’s clichéd portrait of self-centered teenagehood is fairly hard to stomach overall.

This petulant ingénue sails through her classes, struggling only with Latin, and seems to have the world on a string as both teachers and family bow to her intelligence and cater to her whims. Jenny, naturally, is bored stiff by it all. It’s not until the pock-marked, largely nondescript, save for his Jewishness, David (Peter Sarsgaard, tripping over an uneven British accent) pulls up in his flashy car and lures Jenny in that she realizes there’s more than one way to escape banality. Though she doesn’t abandon her studies immediately, suddenly she sees this older man (he claims to be 27 but is more likely pushing 40) as an attractive shortcut around a proper university education that can lead to a more glamorous vocation than that of her austere spinster English teacher (the option embodied here by Olivia Williams as Miss Stubbs).

When Jenny brings David home to meet her parents, they are momentarily leery, then rapidly fall under David’s spell. It only takes “I didn’t know you had a sister” for Mom to soften, while Dad, motivated completely by self-interest, isn’t fully sold until he understands the (entirely fabricated) connections David has at Oxford. It is thanks to such lies that the letch and the lady are able to get away for their first weekend, brandishing, upon their return, a forged inscription by Oxford hangabout C.S. Lewis. By film’s end, great emphasis is placed on delinquent parenting—a big theme in Barber’s article—insisting that Jenny’s parents encouraged her to pursue a relationship with this strange man. But, in fact, these parents come off as merely nebbishy and ineffectual enough to bend to their daughter’s ill-advised choices. To paint them as villains eager for their daughter to marry a rich older man feels false, and only increases my dislike for Jenny, who wants to be sophisticated and mature, but refuses to take responsibility for her actions.

Much of Lynn Barber’s writing has a feminist slant, and she’s not afraid to bemoan the fact that she, a clever young girl, grew up before there was a proper place for such girls. “Feminism came too late for me,” she wrote in an Observer article late last year. “Boys were the enemy, but they were also the goal. You had to catch one eventually or you risked being a spinster like your teachers, and no one wanted that.”

One can only assume that Barber is being sardonic here, but the trouble is, watching An Education, one might actually believe those types of values are being preached. Jenny’s mother is trapped in a dull marriage, while Miss Stubbs, who chooses not to marry, is sexless and frustrated. The dour but well-educated headmistress of school (Emma Thompson) is a parochial, small-minded racist, while David’s best mate’s girl, the gorgeous Helen (Rosamund Pike) is vapid and witless. And, perhaps worst of all, Sally Hawkins only has about 60 seconds of screen time as a self-deluding cuckquean saddled with the babies of an absent man. This sick panoply of female role models is surely meant to represent the depressing lack of options for women in 1962, but by playing into the stereotypes that existed without showing how much more those characters longed for, but were unable to achieve, the film becomes self-mutilating. An Education wallows in its own misery, a joyless cautionary tale that smacks of after-school special mentality.