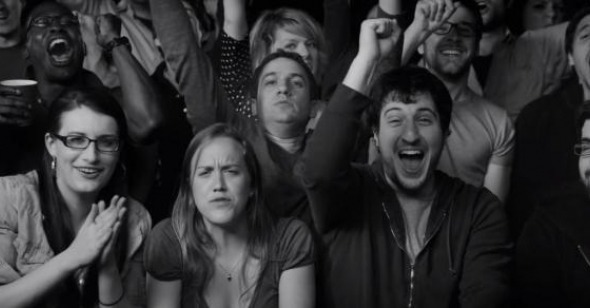 A Loss for Words
by Max Nelson

The 73-year-old American filmmaker Godfrey Reggio is an unusual specimen: a longtime activist for environmental reform and social justice who turned to cinema primarily as a tool for audience persuasion, and yet‚ÄĒled by a certain mystical impulse‚ÄĒrefused to corrupt his images with words. For fourteen years after turning 14, Reggio lived and worked with the Institute of the Brothers of the Christian Schools, a Roman Catholic teaching organization founded by St. John Baptise de la Salle in the early eighteenth century. Though they never took a vow of silence, the brothers led a relatively cloistered life, heavy on study and prayer. It‚Äôs often been said that it was Reggio‚Äôs quiet, devotional habits as a teenager and twenty-something that led him‚ÄĒafter he had left the Brotherhood and spent years in Santa Fe mentoring young gang members, running a free clinic, and working for the ACLU‚ÄĒto make films consisting of wordless images set to music. Reggio‚Äôs four features, made over the course of three decades, can be read as experimental documentaries, works of activism, or long-form music videos. All of them‚ÄĒincluding his latest, Visitors‚ÄĒhave been scored by the composer Philip Glass, whose now iconic soundtracks for Reggio lie somewhere between medieval monophonic chants and the pulsating, swirling minimalism of Steve Reich and Charlemagne Palestine. Reggio‚Äôs movies, with their heavy reliance on time-lapse photography and slow motion, run on Glass‚Äôs clock; in most cases, it‚Äôs the music, more than the images, that sets the rhythm of the scene.

The title of Reggio‚Äôs new film is revealing. In Koyaanisqatsi, the 1982 debut that established‚ÄĒand remains the basis for‚ÄĒhis celebrity status among a certain set of activists and cinephiles, he was already playing the role of a visitor, albeit one with a pronounced judgmental streak. He seemed to be aiming for a voice between that of an extraterrestrial ambassador giving humanity lessons in environmental stewardship and that of a time-traveling Old Testament prophet denouncing the moral bankruptcy of the modern age. In fact, he was closer to a smug dinner guest making a show of objecting to his host‚Äôs lavish lifestyle‚ÄĒall while serving himself a second course. Koyaanisqatsi never earns its attitude of righteous indignation, in part because it‚Äôs too close in spirit and intention to the manipulative mass-media spectacles it‚Äôs built to critique. The film culminates in a fifteen-minute montage, scored to a series of apocalyptic choral oohs and aahs, of sped-up factory floor footage, manic street photography, and rapid-fire alternating TV clips, followed by the pi√®ce de r√©sistance: extreme slo-mo footage of a rocket exploding in midair. For all the film‚Äôs vague, blustery polemics against mass production and consumption, Reggio comes off as strikingly disinterested in the actual economic forces that create, drive, and sustain those systems. ‚ÄúSomething is wrong,‚ÄĚ he announces in hushed, significant tones. ‚ÄúLife is out of balance.‚ÄĚ (Four alternate translations of the film‚Äôs title‚ÄĒnone more enlightening than this one‚ÄĒare solemnly displayed before the end credits.) Then he pauses expectedly, with mild aggravation that, despite such forceful warnings, action is still not being taken.

The shortest of those pauses, between Koyaanisqatsi and its first sequel, Powaqqatsi (1988), lasted six years; the longest, between Powaqqatsi and Naqoyqatsi (2002), fourteen. The stretches of silence that punctuate Reggio‚Äôs career have only fed his oracular mystique, and Visitors opens on an appropriately solemn image: a close-up of stern primate Trisha, identified in the movie‚Äôs closing credits as a female lowland gorilla, disdainfully staring down the camera. More faces follow, now human, all set against a black backdrop, mostly ranging from young children to forty-something adults. Some make faces; others lick their lips, crack smiles, scream, yawn, look at one another, or (most often) watch us intently and without emotion. The majority of the film takes place in slow motion. Reggio has a sharp eye for portraiture, and Visitors, when it gets caught up in simply studying the contours, dimensions, and crevices of its subjects‚Äô faces, comes close to the mesmeric quality it fails to achieve when the stakes are higher and the questions (such as they are) weightier.

Certain elements of Visitors suggest that Reggio has grown closer in spirit since Koyaanisqatsi to the wide-eyed young stoners who helped catalyze that film‚Äôs success. The new movie‚Äôs most entertaining passages break down reflexive human gestures until they seem alien, forbidding, and unfamiliar. In one scene, a young man‚Äôs stifled laughs start to resemble unnatural muscle spasms; in another, members of a frantically cheering crowd at an unseen sports event seem as if they‚Äôre in the throes of some obscure ritual. The camera, in these scenes, behaves like a spaced-out observer alienated from he human race; at several points, for instance, we watch a pair of disembodied hands weave around one another until they start to seem like two bizarre animals trapped in a mating dance. (To me, these moments call up a different association‚ÄĒthe Simpsons episode in which bus driver Otto, having helped himself to some of Homer‚Äôs medical marijuana, looks down at his hands: ‚ÄúYou know, they call ‚Äôem fingers, but I never seen ‚Äôem fing.‚ÄĚ)

There is, then, a tension in Visitors‚ÄĒalmost entirely absent from Koyaanisqatsi‚ÄĒbetween Reggio‚Äôs addiction to grand pronouncements and his more wholesome inclination to study, reflect, and observe. That said, the movie is still shot through with the quality that can make Reggio both so fascinating and so deeply off-putting as a filmmaker: the conviction that each of his shots comes pre-drenched with significance and urgency. There is an overriding arrogance to Visitors, that of a filmmaker convinced he is somehow above making arguments or mounting cases; that stating a point clearly and answering to objections is the province of lesser minds who haven‚Äôt yet learned to speak, as he has, in pure, unadulterated, incorruptible images.

What Reggio really speaks in, though, are themes: dehumanization, evolution, pollution, consumption, mechanization, urban decay, transcendence (or some form thereof), the smallness of a human life on the scale of geologic time. In Visitors, he has built up a rotating stable of images to correspond with each of his pet themes: for urban decay, an abandoned theme park; for transcendence, a luminous open door and a flock of birds in flight; for all that geologic-human time business, a descent into some prehistoric marshland and an aerial shot of earth as seen from the moon; for evolution, Trisha, whose accusatory stare bookends the film. (In the climactic scene, we see her staring down a movie audience.) The result, like Koyaanisqatsi, is too blunt, didactic, and accusatory to induce the kind of poetic reverie Reggio seems to be shooting for, and too vague and associative to cohere as an argument about the state of the modern world. It‚Äôs a film that scolds us without having the patience‚ÄĒor the rhetorical skill‚ÄĒto tell us what it‚Äôs scolding us for.

Maybe, as Reggio once bafflingly put it, ‚ÄúLanguage is in a vast state of humiliation‚ÄĚ‚ÄĒbut there are many writers, and, for that matter, filmmakers, who don‚Äôt think themselves so tall that they refuse to stoop down to its humiliated level. They know, presumably, that if you want to judge, advocate, praise, and condemn without any recourse to language, your images better have a deep, persuasive structural coherence; they need to speak for themselves. Reggio‚Äôs images are far from speaking for themselves; they depend on Glass‚Äôs music to hold our eyes, let alone our ears. It‚Äôs hard to shake the suspicion that Reggio wants to treat the image like an escape hatch, an excuse to cast judgments without resorting to the pesky business of making arguments and juggling ideas. And I‚Äôd be willing to bet that, even as he moves deeper and deeper into incoherence, he is still congratulating himself for bypassing all those suckers still mucking around with words.