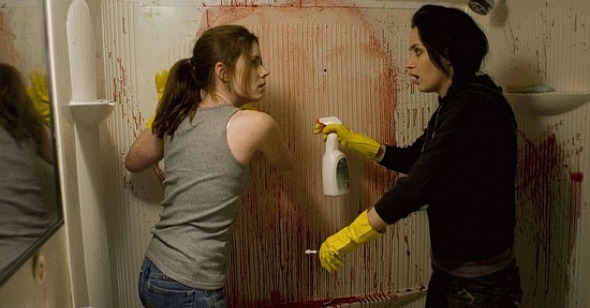 At the end of Sunshine Cleaning, after all of the brain and blood has been wiped up, the reasons for the heroines' neuroses elucidated, and their futures left open-ended, Norman Greenbaum's ‚ÄúSpirit in the Sky‚Äù takes us to the credits. This overused staple of countless shows, commercials, and movies always connotes one of two things: ‚Äúhere comes the bad boy‚Äù or ‚Äúthere go our loveable characters, moving free and easy down the road with newfound perspective.‚Äù It's the latter in Sunshine Cleaning, a charmingly performed but phony repetition of self-involved mantras that go something like, ‚ÄúWe‚Äôre imperfect, not always happy, maybe even a little fucked up . . . but you know what? We're gonna be okay.‚Äù

It's not just the title that aligns Christine Jeffs's movie with that other can of morbid Sundance corn, Little Miss Sunshine. The films share producers, a production company, a New Mexico setting, and a patriarchal wiseacre played by Alan Arkin. It's possible that the movies' two families actually do co-exist, and producers Peter Saraf and Marc Turtletaub are building up some kind of Salingerian universe. More significantly, Megan Holley, like Michael Arndt when he wrote Little Miss Sunshine, is a first-time screenwriter prone to a kind of patronizing, mechanical tidiness that cranks the story along with an almost too perfectly balanced blend of lightness and pathos. This screenplay-as-cake-recipe method, in which every pinch of any one quality has to be mathematically precise, ends up dulling the taste of the final product.

The story follows Amy Adams's Rose Lorkowski, a single mom in Albuquerque who's taking real estate classes, but whose job "for now" is cleaning houses. Profoundly unsatisfied, she has only one (unacknowledged) consolation: that she's at least better off than her semi-goth, slacker sister Norah (Emily Blunt). Her dad (Arkin), a seller of novelty items like huge tins of flavored popcorn, isn't doing so hot either. Another of Rose's consolations is regularly screwing her high-school boyfriend, a cop named Mac (Steve Zahn), in hotel rooms. The problem is that he's married. Still, Mac wants her to be happier, and having observed how much money crime scene cleanup crews make, he tells her to get into the racket. Rose briskly gets over any reservations and agrees, bringing along Norah.

Rose and Norah's slow acclimation to the job produces some gallows giggles, as they take tiny toothbrushes to huge walls of blood and trip over corpse-soiled mattresses en route to the dumpster. But inevitably, the nearness to the aftermaths of such grisly crimes of passion affects these sensitive sisters in a deeper way. Norah starts stalking, and eventually hangs out with, one murdered woman's daughter, expertly played down by Mary Lynn Raksjub. But Norah's empathy (indistinguishably tied up with her self-pity) blinds her to the woman's obvious unreciprocated lesbian affection for her. It's the same kindness that eventually leads Norah to accidentally burn down a client's house while trying to save an escaped kitten.

Rose, meanwhile, has to deal with her precocious son, a future wunderkind whose misbehavior (licking the walls, licking his teacher) is endorsed as misunderstood genius by his mom and grandpa. Oscar, like Little Miss Sunshine's Olive, is a "magical" signifier of the entire family's uniqueness, scarcely more lifelike than the all-knowing, always-whispering children in so much horror fiction and film. When he tags along on a job cleaning up an elderly widow's newly bloody home‚Äîthe husband killed himself‚ÄîOscar suggests they let her use their van's CB radio ("She could talk to him"). Equally caricatured are the high school blondes Rose reunites with at a baby shower after cleaning one of their houses. They're all callow gabbers out of Romy and Michelle's High School Reunion, "emptily" obsessed with their careers and families. "I'll take Rose over them any day," we're supposed to think, as it reinforces Sunshine Cleaning's sustained air of us-versus-them solipsism.

This is the New Zealand‚Äìborn Jeffs‚Äôs third film largely about death, following the domestic downward-spiral drama Rain and the Plath biopic Sylvia. Unlike the sober heaviness she gave those, here she might seem to be looking on the ‚Äúlighter side.‚Äù But Sunshine Cleaning only pretends to. A revelation about Rose and Norah's mother's demise creates undeniable sympathy, but it connects so mechanically with the plot, and creates such bold and underlined double meanings with their jobs, that it's borderline insulting. Stylistically, the slo-mo flashbacks showing the girls playing in sprinklers before their grisly discovery, and clips of their mother in a soap opera that look bizarrely like surveillance footage, only increase the awkwardness.

The leads can't be faulted. Blunt is lovably damaged and sympathetic, even when she's making wrong decisions. And Adams is doing something like what she did as Ashley in Junebug‚Äîputting up a brave face. Only, her Rose is more apt to drop the sham, as when she's laughing at herself on a lonely hotel bed, repeating, ‚ÄúI'm such a loser!‚Äù But even Adams can't rescue a scene in which she, taking Oscar's whimsical advice, tearfully attempts to contact the dead on the CB. Adams is above this kind of material, just as you wish the movie would be above recycling ‚ÄúSpirit in the Sky,‚Äù which follows soon after.