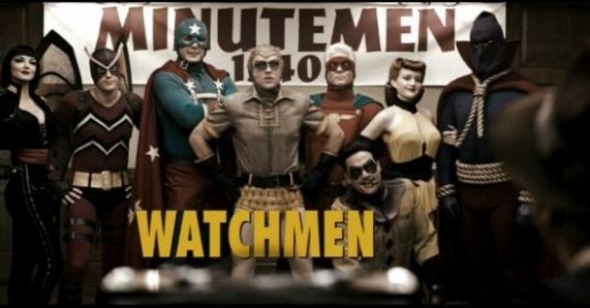 They say that you never get a second chance to make a first impression, and that goes for having one, too: I‚Äôm thus forever on the record as saying that I more or less enjoyed Zack Snyder‚Äôs Watchmen (now experiencing a precipitous box-office decline at a cinema near you). It‚Äôs not that hindsight has led me to hate the film: I still think that as a feat of big-budget engineering it‚Äôs fairly impressive, and that its vivid color palette and broadly variegated mise-en-sc√®ne elevate it, at least as a visual experience, above the studied gloom of The Dark Knight (which still looks, to my eyes, like a dull, reactionary non-event). But I am already second-guessing my statement that Watchmen ‚Äúremains faithful to the spirit of Alan Moore and Dave Gibbons‚Äôs seminal, Reagan-baiting graphic novel.‚Äù

Yes, the film retains its source material‚Äôs setting (an alternate-universe version of the 1980s where Richard Nixon is still the President and the superheroes who helped him to forge his authoritarian grip have been legislated out of circulation) and its basic narrative thrust (the murder of one retired crime fighter leads his former colleagues towards the revelation of an apocalyptic conspiracy perpetrated by one of their own) has been more or less unmolested. The characters have been designed to look as exactly as they appeared on the page‚Äîbest in show is the glowing blue lab-accident-victim/atomic-age demigod Dr. Manhattan (played, avec CGI enhancement, by Billy Crudup)‚Äîand so have most of the key images, including the numerous acts of savage, lethal violence.

And there‚Äôs the rub. It would be overstating the case to say that Moore and Gibbons were ‚Äúinterrogating‚Äù violence, but they sure as heck weren‚Äôt endorsing it. The relentless brutality of Watchmen‚Äôs world wasn‚Äôt meant to be persuasive. And in those instances where the tone seemed to be wavering, it was possible to adjust your interior voice accordingly (for instance, when I read Frank Miller, I imagine his ersatz tough-guy prose as read by Comic Book Guy from The Simpsons, which greatly improves the process). No such luck onscreen, though, where you‚Äôre at the mercy of the director‚Äôs sensibility‚Äîin this case Snyder‚Äôs kicky, rabble-stoking bloodlust. (If the Klingons eventually open a cinematheque, I suspect he‚Äôll be the first candidate for a retrospective).

When Jackie Earle Haley‚Äôs psychopathic vigilante Rorschach‚Äîan unrepentant killer ironically framed for the one murder he didn‚Äôt commit‚Äîinforms his fellow inmates ‚ÄúI‚Äôm not in here with you‚Äîyou‚Äôre in here with me,‚Äù it‚Äôs played like a Dirty Harry boast. Snyder is all too happy to make the audience‚Äôs day shortly thereafter in an extended prison-break sequence featuring both 300-style slow-mo combat and cold, clinical images of dismemberment. An earlier scene detailing the moment of Rorschach‚Äôs psychic break proves even more instructive in showing where Snyder‚Äôs sensibility lies; whereas in the comic, the character at least offers his child-killer prey a Se7en-style escape hatch (chaining him inside a burning building and then offering him a saw), the film version finds him burying the hatchet. Repeatedly. In the guy‚Äôs skull. In close-up.

My issue is not that Watchmen is gory or unpleasant, of course (for that sort of assessment, you can turn to Reverse Shot whipping boy Anthony
Lane). It‚Äôs that its unpleasantness doesn‚Äôt inspire any reflection‚Äîsomething that can‚Äôt be said of the comic book, which functioned quite smartly as a meditation on reception. Moore and Gibbons‚Äôs most innovative stroke was the inclusion of a comic-within-the-comic (a savage castaway melodrama called ‚ÄúTales of the Black Freighter‚Äù)‚Äîthat served as a counterpoint to the main action. The moment where the embedded narrative dovetails with the main action is ingenious but also devastating, suggesting that the series‚Äô ostensible villain‚Äîthe billionaire Ozymandias‚Äîdevised his horrifying cure-all plan for the human condition from memories of his favorite childhood penny dreadful.

There‚Äôs no comparable moment in Watchmen the film, for the character of Ozymandias (flatly embodied by Brit Matthew Goode) or for the audience, who are spared images of New York City in ruins (for that, they can just go to see Alex Proyas‚Äôs batshit-crazy Knowing). After spending the majority of the film reveling in brutality, Snyder holds back, not out of any sense of tact (this is the guy who worked a zombie baby into his Dawn of the Dead redux), but because the director is only interested in showing bad things happening to bad people. The plot still hinges on Ozymandias‚Äôs elaborately arranged slaughter of countless innocents, the scope of the destruction actually widened to include other major world capitals (but as you‚Äôve doubtlessly read already, the delivery device is no longer a genetically engineered squid monster). The plot‚Äôs best twist‚Äîthe cavalry come and find they‚Äôre a few hours late‚Äîis still there, but the attendant moral query, about the ethicality of breaking a few million eggs in order to make a proverbial omelet of world peace, is defanged by the detached presentation; there‚Äôs no corollary to the terrible intimacy of the novel‚Äôs climax, where the reader-within-the text is pointedly placed at Ground Zero.

Snyder says that the animated ‚ÄúTales of the Black Freighter‚Äù segments will be integrated into the eventual special-edition DVD release, but I suspect that the idea is too medium-specific to survive the transition. And it‚Äôs not like Watchmen really needs to be longer, either. After a shapely opening 30 minutes highlighted by a brilliant credit sequence that compresses a half century‚Äôs worth of public/pop memories into the space of a Bob Dylan ballad‚ÄîSnyder starts losing his sense of pace. The most egregiously draggy bits feature Patrick Wilson‚Äôs lachrymose Batmanqu√© Nite Owl, who agonizes over the decision to re-don his cowl; if ever there was an actor ill-equipped to convey a sense of inner torment, it's Patrick Wilson, whose pudgier-than-usual appearance fails to offset his usual department-store mannequin drabness. (He‚Äôs unfortunately well-matched in this regard by Malin Akerman, who at least takes distaff acting honors in light of Carla Gugino‚Äôs horrific, latex-marred turn as an aged superheroine matriarch).

In light of these and other tonal and dramatic deficiencies, is it significant that a few of the actors (namely Haley, Crudup, and Jeffrey Dean Morgan as the hulking, sociopathic Comedian) manage to do excellent work? Or that a few sequences, like Dr. Manhattan‚Äôs sulky self-exile to the surface of Mars, manage to evoke a real sense of widescreen wonder? Or that there are a few instances of pomo wit made even more pleasing by their fleeting, corner-of-your-eye presentation (for instance, check out who‚Äôs at Studio 54 with Ozymandias during the opening credits)? In a word: ‚Äúsure.‚Äù Watchmen may be a failed adaptation of a difficult text, but it isn‚Äôt a debacle like 300. Its mixed critical and commercial reception means that, unlike The Dark Knight, it isn‚Äôt begging to be brought down a peg. That its contents already feel like a distant memory just two weeks after I saw it with a rabid opening-night crowd suggests that its legacy will be one of indifference. Watchmen‚Äôs the ‚Äúultimate superhero movie‚Äù until the next one comes along.