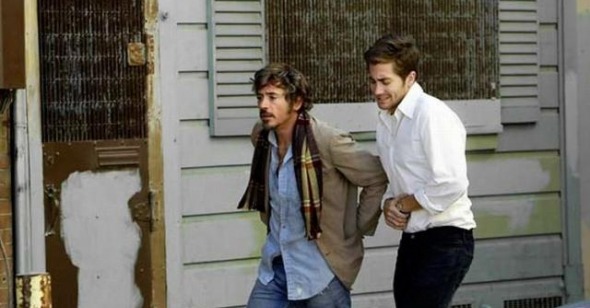 Pauline Kael once deemed Steven Spielberg not so much a filmmaker as a toymaker. In this regard, David Fincher isn‚Äôt so much a filmmaker as he is a game maker. Or game player. Indeed, the title of Fincher‚Äôs third feature, The Game, could just as easily apply to each and all of his films, from Alien3‚Äôs gothic sci-fi labyrinth to Fight Club‚Äôs ‚Äúwatch again how we fooled ya‚ÄĚ anarchic pranks and now to Zodiac‚Äôs surprisingly down-to-earth police procedural. Fincher's worlds are constructed out of the shifting power his players‚ÄĒmonsters, shooters, thieves, tormentors, leaders, cops‚ÄĒhave over one another, and from this dynamic Fincher has repeatedly pondered the manipulative and obsessive nature of the cinematic apparatus. His latest follows in grueling and pedantic detail the case of the Zodiac Killer, who terrorized northern California from the late 60s to the 70s, and it‚Äôs no great surprise when Fincher reveals that a prime suspect worked in a movie theater and, further, had a special fondness for the 1932 version of The Most Dangerous Game. The killer cribbed his signature/logo from movie countdown stock footage; once more Fincher draws parallels between image producing and control; but like his last effort, Panic Room, it remains to be seen how much longer audiences are willing to play along, or have Fincher play them.

Fincher must have realized Panic Room exhausted the most contrived and stylized extremes of his cat-and-mouse mindfucks, because Zodiac marks an abrupt change in the director‚Äôs sensibilities. Zodiac‚Äôs subject matter still allows Fincher to indulge in puzzles, clues, and ingenious, homicidal boogeymen‚ÄĒthe laughably ponderous Se7en proved Fincher would have absolutely no interest in the troglodytic butchery of an ‚Äúunsophisticated‚ÄĚ serial killer like Ted Bundy‚ÄĒbut this time a tempering of showmanship hints at possible maturation. Diminished in dramatic impact are Fincher‚Äôs tendencies toward titillating violence, voluminous compositions, excruciating tension, and intricate, invasive camera work, which makes Zodiac an admirable but awkward transitional exercise, like the first ‚Äútasteful‚ÄĚ illustrations of an artist best known for action painting with his own body fluids.

Zodiac‚Äôs de-emphasis on the cheaply lurid is conceptually a welcome turnaround from the high-concept sensationalism of Se7en, a film that extended the unfortunate legacy of The Silence of the Lambs by reinventing it as a pointless treatise on run amok Nietzscheism. Fincher stays clear of this route in Zodiac‚ÄĒbut, bowing to convention, not at the outset. The opening shots are quite beautiful‚ÄĒit‚Äôs July 4, 1969, and fireworks blossom all over a hushed, darkened San Francisco Bay Area city. A version of Hair‚Äôs ‚ÄúEasy to Be Hard‚ÄĚ (‚ÄúHow can people be so heartless?/How can people be so cruel?‚ÄĚ) dreamily plays over these images. Soon we follow two teenagers driving to lover‚Äôs lane. With eerie foreboding and false alarms the inevitable scene wouldn‚Äôt look out of place in a standard slasher pic, and if it weren‚Äôt for the dark gloss of Harris Savides‚Äôs digital video photography‚ÄĒa cross between the under-lit hells of Gordon Willis and the otherworldly sheen of Gregory Crewdson‚ÄĒit would be hard to tell the difference. When the Zodiac strikes, the radio quietly piping Donovan‚Äôs ‚ÄúHurdy Gurdy Man‚ÄĚ suddenly ratchets up to full volume, the sort of obvious artistic counterpoint that occasioned the New York Times‚Äô lazy headline summation of the film: ‚ÄúHunting a Killer as the Age of Aquarius Dies.‚ÄĚ

The connections Zodiac initially makes between the waning idealism of late 60s/early 70s youth culture and the ascent of its darker elements (also continually evoked by the other two components of the Californian Holy Trinity of Evil, Altamont and the Manson Family murders) are, however, scant and weak. Perhaps fearful of other filmmakers‚Äô recent failures to link serial killers with the cultural zeitgeist (Spike Lee‚Äôs Summer of Sam, for one), Fincher and screenwriter James Vanderbilt withdraw this line of inquiry and focus instead on the efforts made by a reporter, Paul Avery (Robert Downey Jr.), and cartoonist, Robert Graysmith (Jake Gyllenhaal) at the San Francisco Chronicle and two SF police inspectors, David Toschi and William Armstrong (Mark Ruffalo and Anthony Edwards), to track down a killer who sends warning letters to the Chronicle along with encrypted messages. Fincher loves the thrill of such identity-concealing mystery, and the best moments of the film come early on when Fincher surrogate Graysmith plays amateur sleuth, enthusiastically trying his hand at the codes whenever he can, and later bits in which he attempts to single-handedly solve the crimes after the police have given up hope after nearly a decade.

But in between there‚Äôs a long stretch of tedium, a vacuum created by the absence of the killer‚Äôs viewpoint and that Toschi and Armstrong‚Äôs (and, to a lesser extent, Avery‚Äôs) investigations of further murders must fill. Fincher displays such respect for recreating the quotidian nature of police work that the effect is numbing, and the inspectors are such underdeveloped characters that we‚Äôre made to care about nothing more than their steely, boring professionalism. The grueling routine of police work mirrors Vanderbilt‚Äôs uninspired drama and dialogue: each main player receives a quirk, and every so often the action is punctuated by a dependable clich√© (Police captain, played by Delmot Mulroney, to Toschi after a prime suspect is frustratingly cleared: ‚ÄúTake some time off. Spend it with your wife . . .‚ÄĚ). Avery‚Äôs freewheeling, boozing unscrupulous newsman gets the film‚Äôs wittiest lines (upon noticing Graysmith sipping an Aqua Velva: ‚ÄúThis can no longer be ignored‚ÄĚ) and, relatively, the most captivating personality, but as interpreted by Downey he‚Äôs just Downey, a predictable collection of muttered sarcasms and jerky gestures, this time with Anton LaVey facial hair. As for non-victim women, they‚Äôre virtually invisible in Zodiac, and the only one of note, Graysmith‚Äôs girlfriend/wife Melanie (Chlo√ę Sevigny), thanklessly fills the unsupportive nag role. Whereas Fincher has, in the past, openly attacked femininity (Fight Club) or masculinized it (Alien3, Panic Room), here he practically banishes it altogether.

But the testosterone has strangely settled to a civilized level in Zodiac. Only one mentioned theory of the off-screen Zodiac‚Äôs violent reaction to sexual aggravation has anything to do with the stock Fincher male, who works through his uncontrollable or improperly channeled aggression in antisocial games on the boundaries of society. Instead, Zodiac unromantically (and uncritically) displays law enforcement‚Äôs bureaucratic crime solving techniques‚ÄĒVanderbilt overtly references the Zodiac Killer-influenced Dirty Harry to contrast Harry‚Äôs quasi-fascism with Toschi‚Äôs rulebook propriety‚ÄĒand keeps any potentially absorbing drama (e.g., Avery scoops a lead before Toschi and Armstrong get to it) to a minimum. This is the first time Fincher has been so preoccupied with the ostensibly realistic manner in which socially constructed games function (Se7en, The Game, and Fight Club being slick, pent up wish fulfillments), and because of this an aesthetic overcompensation (or undercompensation, as the case may be) takes effect. Even as Savides‚Äôs lens drapes every night scene in immoderate curtains of black, Fincher foregoes the effusive grime that made his name in Se7en and Fight Club, as well as the digitally enhanced, penetrating tracking shots from sterile, De Palma‚Äďesque surveillance thrillers The Game and Panic Room. It says something that the most intense scene in the film involves a clinically described Zodiac killing at an idyllic lake in broad daylight.

The dearth of cinematic bravado should be an encouraging sign for Fincher, whose worst directorial instincts often result in gimmicky excess. But just as Zodiac‚Äôs period, environment (a 60s and 70s San Francisco setting has rarely provided for such a missed opportunity), and characters are superficially accounted for without being thoroughly explored, so does narrative propulsion stall without Fincher‚Äôs regular bag of tricks‚ÄĒit feels like he‚Äôs spending most of the film pondering what to do without them, and every once in a while slips in an unmotivated moment of showiness (an overhead shot following a cab, time-lapse photography of a constructed building) as if sighing for relief. The film briefly comes alive when Graysmith takes center stage again in the last third of the film to try to solve the case where the police‚ÄĒconfronted by dead ends due to contradictory evidence and the Zodiac‚Äôs epistolary dormancy‚ÄĒwere left stumped, but by then it‚Äôs too late. The game of hunting an elusive criminal assumes greater urgency once the hunter evinces a personal, if irrational, stake in the hunt, and if other movies attempt to make us care about a character obsessed with, say, the number 23, then Fincher earns our attention when the narrative shifts to Graysmith‚Äôs mania for a game that loses its object‚ÄĒjustice‚ÄĒand itself becomes the goal.

Yet Graysmith is drawn just as thinly as everybody else in Zodiac, blocking our empathy, and the real life facts of the case presumably allow only two confrontations with possible dangerous Zodiac suspects, both of which go nowhere. It‚Äôs to Fincher‚Äôs credit that he‚Äôs willing to tell a tale with enough minutiae and cul de sacs to consume several films, let alone one two hours and forty minutes long‚ÄĒas opposed to his usual penchant for frenetic catharsis, for once he‚Äôs dealing with irresolute and inertial material not so acclimated to multiplex consumption (although the serial killer subgenre remains a reliable crowd pleaser for penny book psychology, authoritative punishment, and lotsa gore). Zodiac suggests a new direction, but Fincher still comes across as a game maker, adrift without the calculating devices that he possesses and which possess him.