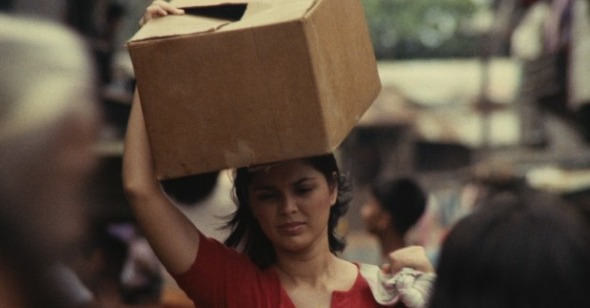 Left Behind
by Michael Joshua Rowin

A variety of sources, all reliable, informed me that Insiang is Filipino filmmaker Lino Brocka‚Äôs masterpiece. Yet I emerged from the NYFF press screening completely baffled by this consensus. Did my lack of knowledge of Brocka or even a solid understanding of Filipino cinema account for a complete misreading of it? Had I not the proper context in which to situate and analyze the film? Or was the word ‚Äúmasterpiece‚Äù only a matter of relativity, like calling Phone Booth Joel Schumacher‚Äôs magnum opus? Is Brocka a mediocre to bad director who nonetheless remains one of the Philippine‚Äôs few cinematic representatives on the world stage, thus allowing his output a free pass? Or was Insiang, by any standard, simply a hokey, silly piece of cheese that has earned its reputation‚Äîone might theorize‚Äîbecause of its status as Third World Art, a mode of production necessary for its creators but also a terrific justification for critics willing to use the neorealism defense to bolster an otherwise unremarkable film?

Lord knows I‚Äôve tried to learn something about Brocka and his work in the weeks between the screening of Insiang and the writing of this review. But there‚Äôs little to go on. One important fact is that Brocka, arguably one of the greatest Filipino filmmakers, whose Insiang was the first film from his country screened at the Cannes film festival, was also a Mormon convert. This is significant because Insiang is fueled with missionary morality, a sense that the world‚Äôs wickedness is a pure state in need of nothing less than divine clean-up. The 1976 film is also, not coincidentally, unfiltered melodrama, the kind of unironic paean to Greek tragedy that without the appropriate critical distance or at the very least a sense of humor becomes a soggy, unintentional joke. The teenage title character (Hilda Koronel) exists in a world only intent on crushing humiliation, transforming her from an innocent beauty to a vengeful monster. Rather than the dirty grace of, say, Bresson‚Äôs Mouchette, Brocka develops the character‚Äôs downward spiral as uncomplicatedly as possible.

Insiang lives with her bitch of a mother, abandoned by her father, in a hellish Manila slum. Tonia (Mona Lisa), the mother, is something straight out of the Brothers Grimm, berating Insiang for her nonexistent insolence and laziness, and throwing desperate relatives out of the house to make room for boy toy Dado (Ruel Vernal), the kind of ridiculous tough who actually wields a ‚ÄúDado‚Äù tattoo on his chest. Tonia tortures Insiang with her constant insults and flagrant public displays of affection with Dado, who has his eyes on the daughter. Because he does he picks on Bebot (Marlon Ramirez), Insiang‚Äôs boyfriend. The fucked-up dynamics build and build until one night Dado rises from his love nest with Tonia to rape the virginal Insiang. Insiang tells her mother, but the wicked, wicked woman sides with Dado and his insane justifications. Sneaking into her room again, Dado confesses to Insiang that he‚Äôs really in love with her, which she uses as a lever, to get him to kick Bebot‚Äôs ass‚Äîyou see, after his own declaration of love, Bebot had taken Insiang to a cheap motel for a little action, and then ditched her in the morning. Once Insiang and Dado start bonding a little too conspicuously, Tonia strikes out in fury, stabbing Dado and ending up in the big house. In the last scene, Insiang visits Tonia in jail and, to absolutely nobody‚Äôs surprise, announces that she planned her downfall all along and asks for her forgiveness.

Apologies for the summary, but the best way to truly account for this rote film is to offer a rote description. Insiang is all skeleton and little flesh: the actors trudge in front of the camera, woodenly recite the purely functional lines from Lamberto E. Antonio and Maria O‚ÄôHara‚Äôs screenplay, and wait for Brocka to provide some sort of commentary. None arrives. A typical comparison is made to Insiang and the melodramas of Sirk and those of Fassbinder. But such comparisons don‚Äôt hold water, because Brocka gives no indication that he sees any connection between the vicious circle of his characters‚Äô deceptions and the world around them. Undoubtedly, one can hardly miss the vague, unspecific implications of Insiang and Gang‚Äôs social situation‚Äîthe Hobbesian inferno that is the Manila slum, unnecessarily represented by an opening pig slaughtering sequencing‚Äîand the cruel decisions they come by. But too much gets left to ‚Äúhuman nature‚Äù and the worst clich√©s of psychological dwarfism. For example, Bebot jilts Insiang because it works for the plot and, heck, that‚Äôs what young men usually do to young women. To drive home the lugubriousness, Brocka ends almost each scene by zooming in on a despairing character, usually Insiang. For further reinforcement, interchangeable flute songs vie for optimal tear-inducing effect. The generated is that of an after-school special, not Written on the Wind.

In recounting Insiang‚Äôs flaws I was reminded of another possibility for my incomprehension. One fellow critic pointed out that the screening conditions for this retrospective choice for the Film Festival were not ideal: the projected video transfer made Insiang appear as a cheapo Seventies kung-fu flick instead of a dramatic rendering of social documentation. Maybe so, but I‚Äôve seen plenty of video transfers of films I fell in love with‚Äîno matter how much one tries to dig for one, it‚Äôs incredibly difficult to find an excuse for Insiang‚Äôs silliness. Hopefully one day, after going through what is widely considered Brocka‚Äôs impressive oeuvre I‚Äôll finally get it. Until then, I‚Äôll remain baffled.