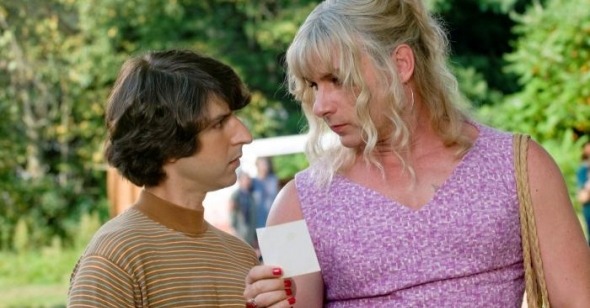 Dead on Revival
By Eric Hynes

While some would call it middlebrow, I prefer to think of the Lee-Schamus project as classical. Director Ang Lee and screenwriter-producer James Schamus construct traditionally plotted stories in which characters struggle to be, become, and love. The vocabulary of cinema is marshaled to serve the narrative, full stop. Their conception of character development, drama, and conflict is usually straightforward, but they punch holes here and there in familiar packages, shedding new light. They are storytellers, and respect the relationship between their characters and the audience.

For their new film, Taking Woodstock, based on Elliot Tiber’s memoir of the same name, they seem unbothered by the dead weight of Woodstock’s cultural baggage, approaching the supposedly epochal historical event from one man’s sidelong vantage. It’s a trick they’ve turned before—and much more effectively. Their Hulk used a blunt comic-book hero as an unlikely model for psychological and moral shading. Their “gay cowboy movie” (Brokeback Mountain) wasn’t the sociopolitical grenade that many wanted or feared it would be, but rather a romantic-melodramatic duet, as powerful and limiting as such scenarios would imply. They’ve made a samurai epic (Crouching Tiger, Hidden Dragon) a Civil War film (Ride with the Devil), and a WWII period drama (Lust, Caution), all of which eschewed grand statements for finely drawn individual stories. Character and story may always be primary for Lee and Schamus, but their selection of grand canvases for personal, even hermetic tales functions as a subtle critique of macro or “great man” approaches to human endeavor. While the larger societal and historical narratives are important, and serve to shape and define particular scenarios and relationships, they ultimately amount to shifting premises for a series of individual protagonists and their universalized experiences. But with Taking Woodstock their classic architecture falls apart. The film is misconceived, miscast, half-hearted, and hackneyed, and its narrative failures lead to questions of larger context that Lee and Schamus are aren’t particularly interested in answering.

Why Taking Woodstock, and why now? The possibility that team Lee-Schamus pursued the project because of this summer’s 40th anniversary is almost too depressing to entertain (what, no anniversary love for the moon landing or the Miracle Mets?) And yet, considering the film doesn’t strive or even acknowledge a need for greater relevancy, such listless opportunism seems all too plausible. Lee has also suggested that after several serious films it was time to make a comedy. That Taking Woodstock, with its fumbled timing, uneven tone, and old world stereotyping, is Lee’s idea of a comedy is more depressing still.

The film is a coming-out story of sorts, yet it’s not a remotely convincing or plausible one. Protagonist Elliot Teichberg (a fictionalized Tiber, played by comedian Demetri Martin) has returned to the Catskills for the summer of ’69 to help his Russian-Jewish parents stave off financial ruin. Their dumpy motel is on the verge of foreclosure, but Teichberg earns them a brief stay and aims to turn things around. If you pay attention to tossed-off information, you’ll learn that Teichberg is a grown man who lives in the Village, works as an interior designer, has close gay friends, perhaps a boyfriend, and participated in the Stonewall riots just weeks prior to the events dramatized in the film. But he’s not out to his parents, and won’t come out during the course of the film, either.

The film chronicles several fateful weeks during which Teichberg invites organizers to use town land for a proposed music festival, converts the motel into festival HQ—effectively saving his parents’ business—and gets sucked into the countercultural whirlwind, all while coming to terms with his identity and its seeming incompatibility with the bracketed world of his immigrant parents. Even without Woodstock buzzing in the background, suggesting more compelling narratives, it would be too thin to hang a movie on. Schamus oversells the coming-out cliché, and bland Muppet Martin is disastrously recruited to play the 34-year-old Teichberg as though he’s a college kid home for summer break. You expect more from the team that brought America the Brokeback spit-lube fuck than a cowardly, never-been-kissed characterization of a gay male adult. He awkwardly flirts with a hunky carpenter then later kisses him on the dance floor as if on a dare. Later, he’s briefly shown sharing a morning bed with the man. Teichberg’s sexual experiences are elided, and his worldliness is played down to punch up a relatable naiveté that the character, if not Martin, obviously contradicts. Schamus doesn’t actually lie about Tiber’s biography to sell his half-hearted genre appropriation; he and Lee just play down his out adulthood and hope Martin’s virginal presence distracts us into accepting the coming-of-age malarkey.

It’s hard to exaggerate the calamity of Martin’s casting. His voice makes Edward Norton’s reedy woodwind sound like James Earl Jones's big balled bass; his New Yawk accent comes and goes but not necessarily to distraction, as his comatose charmlessness led me to stop actively listening about 20 minutes in. He’s the main character, central to nearly every scene, but he’s like a white smear on the screen. Bad as he is though, at least he’s not responsible for the film’s alarming Jewish minstrelsy. Imelda Staunton’s turn, as Elliot’s penny-pinching, verbally abusive (“ya yutz!”), ball-busting mom is destined live in the pantheon of Hollywood’s ethnically offensive portrayals, right up there with Mickey Rooney’s ping-pong–cheeked Chinaman from Breakfast at Tiffany’s. Henry Goodman as Elliot’s dad isn’t much better, but he’s at least given intimations of an interior life to soften the caricature. Also, Emile Hirsch plays a veteran recently returned from Vietnam armed with clichés of shell-shocked trauma, erratic public behavior, and chopper sounds in the distance. Have I mentioned yet that Liev Schreiber shows up, sitcom cameo-style, in dreadful drag? A butch transvestite that Tiber hires to work motel security during the festival, he’s a visual joke as crass and ungay as Tom Hanks’s frattish cross-dressing in Bosom Buddies. It should be noted that Lee-Schamus coat all of these caricatures with condescending affection—excepting that of Staunton, who’s last seen spooning a stash of cash like a banker Jew in Nazi propaganda—disingenuously pawning off kooky color as worthy of human character.

Furthermore, Taking Woodstock has an awkward, uncertain tempo that never convinces as deliberately offbeat. Unfunny jokes and gags are laid on thickly, like a Catskills comedian unaware of just how badly he’s bombing. Even approached from the side, and even if it brazenly ignores the event’s iconic musical performances, a tale of Woodstock needs energy, a crackling sense of life; Lee’s film is shockingly inert. Eric Gautier, master cinematographer to Assayas and Desplechin, is utterly wasted. His work is fluid and uncluttered, but there’s nothing for his camera to discover. Split screen is used wryly, evoking Michael Wadleigh’s Oscar-winning Woodstock documentary, but without new purpose. Instead of employing the technique for seeing stage action at the same time as crowd action—Wadleigh’s acknowledgment that Woodstock was a dual happening—Taking Woodstock gifts us two sides of Demetri Martin’s palsied face.

Considering that it’s from a filmmaking team usually so committed to the integrity of lived experience, Taking Woodstock is mired by hindsight. Sixties slang is doled out in winking asides. An Age-of-Aquarius drama troupe is a reliably naked sight gag. Most cruelly, anyone who’s less than enthusiastic about the concert comes across as a gargoyled killjoy. Placed firmly within the moment, wouldn’t we understand that while some townspeople’s concerns were motivated by intolerance, others—such as irreparable property damage—were legitimate? What became of the town? Did Woodstock do any good to the region? Or are such matters truly less important than Elliot Tiber learning to appreciate a good toke? By ultimately promoting vague notions of growth and expanded consciousness—Tiber drops acid with Paul Dano and mudslides for freedom with Hirsch—the film falls into the same Sixties trap of letting shortsighted idealism obscure the durable matters of economics, entrenched cultural mores, and prevailing human needs. It turns passing observations about well-behaved hippie kids—yes, yes, no one was harmed during Woodstock, we know—into belabored proof that the viability of utopianism can be measured by lack of violent crime on Max Yasgur’s muddy farm.

The film wants to have it both ways: to show a moment of innocence while foreshadowing an end of that innocence, but the supposition that Woodstock was an uncomplicated time is proved false by nagging dissent at the margins of the frame. The event doesn’t happen if Teichberg doesn’t opportunistically pursue a moneymaker for his destitute parents, or if Yasgur (a fleeting, but marvelously understated Eugene Levy) doesn’t lease his farm at an exorbitant price. These are rich complications that Lee and Schamus are smart to dramatize but sadly refuse to make central. From character portrait to backseat cultural commentary, Taking Woodstock trades in lazy, willful lies. The least the film can do, if it insists on revisiting this tired historical artifact, is not get high on a mythology it doesn’t have the energy to parse.