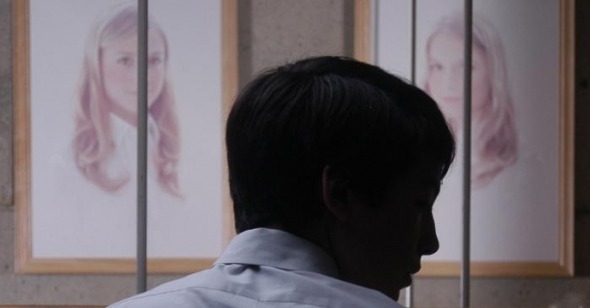 Afterschool plays like a film student’s demo reel of the various ways to signify “alienation”—shallow depth of field, over-lit sterile interiors, ambient sounds of fluorescent light hums, expressionless actors, methodical tracking shots frequently overrunning or catching up to their human subjects. Even the best filmmakers should take care in how they choose to explore new implementations for these overused techniques—Gus Van Sant’s recent Paranoid Park, for example, succeeds at most of the above nearly despite itself—but you’d think Afterschool’s 24-year-old first-time feature director Antonio Campos had just discovered them for himself by the way he embarrassingly assaults the viewers with them in order to fashion his astonishingly shallow portrait of teenage disaffection.

As it consistently takes desperate pains to convey, Afterschool isn’t your average Rebel Without a Cause disaffection. No, this is the age of YouTube, and with the film’s opening montage of notable ‘Tube highlights—an adorable cat, the hanging of Saddam Hussein—Campos wishes to announce he’s going straight to the heart of the cultural zeitgeist and its content-be-damned, moral chaos of instant gratification. For a few minutes, this works fine: The next scene, in which prep school student Rob (Ezra Miller) raptly watches a clip from nastycumholes.com of a porn star being teased by an off-screen director and then threatened with strangulation, neatly captures the humor and horror of the woman’s fake come hither and then her genuine fright, as well as the fascination it invokes in a young male viewer.

But when Campos opens up to a widescreen survey of Rob’s environs we’re pummeled with ostentatious, dilettantish art cinema gestures. Campos likely possesses familiarity with Van Sant (attractive youths abandoned to the edges of the frame or else isolated by shallow focus), Bruno Dumont (crotch and butt shots of Rob’s attractive teacher), Michael Haneke (videotape rewound midway to surprisingly reveal the past tense of a seemingly present event), and even Frederick Wiseman (referenced in a character’s last name—but only the film’s setting has anything to do with Wiseman’s distanced yet compassionate documentaries). His attempts to replicate these director’s strategies, however, are lamely inept. A character cut up or relegated just off-screen by an unconventional composition can work wonders when intermittently, expertly employed, but an entire film composed of such extremes without variety results in numbing overkill. To compound matters, Campos’s dialogue airmails meaning as if we couldn’t catch the obvious visual drift. “Nobody likes me here,” morbid and depressed Rob tells his mom over the phone. “Let’s talk about something pleasant,” she responds in disavowal. Parents just don’t understand.

After further blunt establishment of Rob’s poor little rich milieu (a showy pan ominously zooms in on his crew in the cafeteria as one boy silently suffers another’s taunts of “I fucked your sister”), Afterschool’s plot gets set in motion by a Haneke-like shot taken by Rob and love interest Amy (Addison Timlin) as they work on their A/V class project. A long take of a vacant hallway turns into a document of death when a set of angelic blonde twins, both poisoned by some bad cocaine, stumble into view, but this crucial scene is utterly fraudulent. It’s doubtful that a representative of Generation YouTube (as Mike D’Angelo so confidently terms it in his glowing review of the film) would have the patience to contemplate so little for such an endless duration, while the twins’ demise is clumsily executed, all hesitating collapses and unconvincing screams. The twins’ deaths amplify, at least for sensitive Rob, the barely concealed violence, drug abuse, cheating, hypocrisy, and disloyalty haunting the privileged East Coast school, and Campos links these problems to the distance from the “real” that a viewing-obsessed youth culture must traverse with ever more violent images and actions—cell-phone camming hallway fights, anonymously posting footage of tragic events, imagining themselves as the unwitting subjects of constant surveillance. In this regard, Afterschool’s failure isn’t in its ideas, but in its realization. Quoth D’Angelo, who believes the film follows through on its premise, writing about a scene in which Rob mimics the nastycumholes clip:

“It’s only when [the porn star’s] unseen interrogator grabs her by the throat that she drops the facade and we get a brief glimpse of the actual scared-shitless girl beneath the manufactured pout and salacious come-ons. That is what Rob is responding to and attempting to replicate. He doesn’t choke Amy during their (amazingly credible and virtually unseen) first kiss, when both seem to have forgotten the camera—he does it at a moment when Amy is clearly performing, after he’s seen her demeanor abruptly change. It’s his painfully awkward attempt to make her more real. That’s what the entire film is about . . .”

I’d buy this argument if not for the unavoidable evidence that Campos has put little effort into making his teenage characters at all credible. How are we supposed to take seriously the criticism of Rob’s confused sense of mediated reality when Campos creates a high school community as far from awkward pubescence as a Calvin Klein commercial is from human sexuality? Uncompromisingly austere and bleak Bresson wasn’t above having his protagonist from The Devil Probably admit to wanting to constantly fuck; prurient Van Sant regularly portrays his kids in posed states of angst, but at least they boast, tease, and rant in the ways only American adolescents can; even often self-satirically dour Haneke has Benny (Rob’s Austrian predecessor, from Benny’s Video) blast heavy metal music in his room—the kid has interests. In stark comparison, Afterschool’s teens are so exaggeratedly zombified, so picturesquely tortured, so much the unintentionally romantic projection of self-conscious, stupefied angst (never has a student body appeared so preposterously laconic), that the film’s exploration into shifting values of true and false comes across as highly dubious.

The ironic climax of Afterschool involves Rob’s completed video tribute to the Twins, including footage of their parents’ anguished inability to speak in front of the camera. “It doesn’t even have music!” the principal complains about the odd, unsettling video. Rob’s arty, aggressive confrontation is supposed to be closer to the truth behind the girls’ deaths than the mawkish tribute eventually screened at a memorial assembly (end title: “We Must Never Forget”), which of course makes Campos’s own film—so similar in style to Rob’s that it commits to the oh-so-daring aesthetic principle of not even having music—the overriding determiner of truth.

But again, the claim to truth—something I doubt any of the above filmmakers would ever purport to have access to—becomes nullified by Afterschool’s vacuous, non-dimensional portrait of lost, beautiful youth. Directing his cast as if they were de facto victimized drones of the ‘Net, Campos overcompensates for circumventing the social complexities of high school by forcing every off kilter shot to perform heavy thematic lifting, peaking with the film’s most obnoxious moment, when Campos refuses to reframe the shorter students standing at a podium to honor the twins after some taller professors have already spoken. Staring out over the bottom of the frame as if searching for any sign of directorial help, the students are caged and mocked. With two hours of this kind of condescension, Afterschool merely proves Campos incapable of making a statement about the very generation he opts out of facing head on. He clearly cares more for his camera.