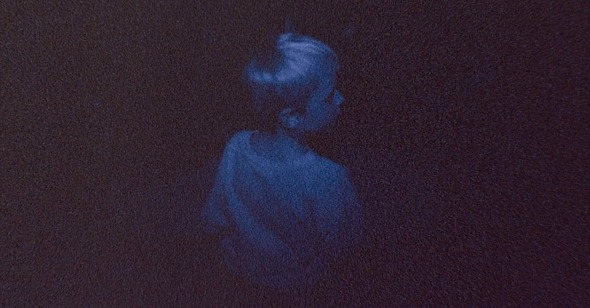 The first sound to pierce the night is a father slamming a door. He’s just found his son Kevin (Lucas Paul) injured, crying, having fallen down a flight of stairs in the night. A daughter, Kaylee (Dali Rose Tetreault), covertly watching cartoons in her bedroom, reflexively turns the television off when she hears her father’s footsteps approach soon after. The specifics of Kevin and Kaylee’s home life are rarely made more concrete than this, but in moments like these, director Kyle Edward Ball conveys all that’s needed to feed the fears to come.

Skinamarink, Ball’s feature debut, hinges on the unsaid and the unseen, only tilting further into its narrative negative space as it progresses. Key events presage the film’s horrors—Kevin and Kaylee’s father disappearing, and doors and windows mysteriously vanishing to trap the children in their house. But what soon takes over the picture is a compounding fear of absence. Gulfs of time between traditional scares seem to grow longer. The frames seem to get darker, as previous shots repeat with lesser visible detail in each iteration. And in the overbearing absence, Ball sets the viewer’s mind racing—in worrying about what lurks in the unlit recesses of a room, or in trying to attach significance to his free-associative sequence of images the same way a child might try to make sense of their nightmares.

Even with this elliptical narrative approach, the lingering presence of the parental (or lack thereof) looms over the household. The child actors are given just enough dialogue to convey existing familial unease, notably in Kaylee’s pointed refusal to talk about her mother. Whispered commands drift through the darkened hallways, at first no more innocuous than a parent’s (“come upstairs”), before they shift into violent demands of acquiescence and self-harm. In one excruciatingly drawn-out sequence, a child is called up to their parents’ bedroom, confronted with apparitions of their father and mother dematerializing as soon as they leave the frame, provoked again and again to check under the bed before they can exit the room.

It’s perhaps a fool’s errand to try to neatly ascribe meaning to a film meant to conjure the surreal atmosphere of nightmares—which Ball, in his earlier shorts made for YouTube, has become known for. But one can make out the scars of neglect, abuse, and abandonment traced across even the greatest abstractions of Skinamarink. The dread that pulses through the film’s empty spaces soon gives way to a permeating melancholy, as it becomes clearer just how helpless Kevin and Kaylee are within their own home. Toys and cartoons, at first objects of childish comfort, begin to be manipulated by the malevolent force within the house, reminders of the fear induced by pseudo-parental control. Time in the house becomes deliberately indefinite to create a perpetual night, a horrific extension of Kevin and Kaylee’s daily reality. A late scene follows Kevin—completely absent from every frame—attempting to call 911. The operator, like one working for an abuse hotline, asks if he’s whispering for fear of being overheard by someone causing him harm.

Ball and cinematographer Jamie McRae’s imagistic discontinuity amplifies this atmosphere of free-floating tension, with shots rarely showing more than either child’s feet or the backs of their heads, creating a dissociative haze of subject and perspective—children displaced within their own home. (The children’s facelessness similarly becomes a key visual motif, suggesting a maladaptive depersonalization to avoid parental ire.) Much of the early writing on Skinamarink has been rooted in the aesthetics of the film​​, detailing the post-production filtering that transformed digital footage into something between simulated film grain and lossy mid-’90s home video. The strange cross-section of eras and technologies becomes its own kind of visual rhetoric of alienation—the crushed blacks and embellished film grain abstracting even the most rudimentary shots of hallways and open doorframes into the shapes a child might imagine as those of monsters. Most significantly, the desolation of this visual practice never fully lifts once it takes hold, with Ball and McRae leaning further into extended shots in complete darkness across the runtime, insinuating that the scariest outcome is emptiness.

Some of the film’s initial jump scares, admittedly, can’t help but feel a bit more conventional when placed next to the suffocating loneliness of later passages. At its shrewdest, though, as in one late payoff playing into the already unsettling appearance of a toy phone, Skinamarink organically weaves the measured pace of its vacant spaces into its most startling scenes, boiling over without disrupting the careful atmosphere it’s built. The film’s climactic act ratchets up the abstracted mutilations and bloodshed, but only grows more abundant in unbearable stares down unlit corridors, infinitely protracting the wait for help that will never come.

Skinamarink’s power is less derived from the traditional models of horror storytelling and more drawn from its ability to uncannily replicate isolated sense memories of adolescent nightmares. Often letting his images stand on their own, Ball implores the viewer to interrogate what these familiar haunts might tell us about our relationship to our childhood, parents, and the homes we grew up in. He strikes the indelible aura of a bad dream you can't shake—in the vague darkness above your bed that you swear hides a face, or in phantom blood splatters whose recursion marks cycles of violence and abuse.