All the Beauty and the Bloodshed 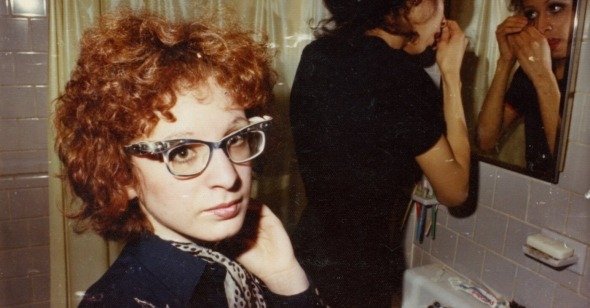 I’m a Witness
By Matthew Eng

All the Beauty and the Bloodshed
Dir. Laura Poitras, U.S., Neon

Two men—one hard-bodied in a blue, spaghetti-strapped tank top, the other neatly balancing a teacup in his left hand—bury their faces in the crook of each other’s necks, their bond frozen in a moment of casual yet overwhelming intimacy. These are Gilles and Gotscho, a Parisian couple photographed by a friend, the American artist Nan Goldin, in 1992, a year before Gilles succumbed to AIDS. But here they are, even now, coiled together in an eternal embrace, the love that sustained them rendered immortal, unravaged by time.

This picture is an encapsulation of the art—which is to say, the life—of Nan Goldin. The legendary photographer escaped a repressive home life in the suburbs of Boston in the ’70s, fell in with a group of queer and trans misfits, armed herself with a camera, and strode lens-first into underground sanctums, first in the Bowery and soon around the world, becoming the star of a scene whose movers and muses she captured and enshrined. Laura Poitras’s All the Beauty and the Bloodshed is an emotionally engulfing portrait of this lionhearted luminary, who is first seen leading a die-in in the Egyptian wing of the Metropolitan Museum of Art, which holds several of her works in its permanent collection.

In 2014, Goldin, then living in Berlin, underwent treatment for tendinitis in her wrist; post-surgery, she was prescribed 40 milligrams of OxyContin per day and became addicted overnight to the lethal painkiller. (At the height of her addiction, Goldin was consuming up to 450 milligrams over the course of a given day, a more than tenfold increase in her original dosage.) After surviving a fentanyl overdose, Goldin went public with her recovery during a 2017 talk in Brazil and a subsequent essay in Artforum. During this period, Goldin came across a bombshell article by Patrick Radden Keefe in The New Yorker and made a startling discovery. Purdue Pharma, the company that first peddled Valium to the masses before moving on to OxyContin, is owned by the Sackler family. As Keefe’s piece alleges, the Sacklers were well-aware of the habit-forming risks of the opioid but hawked it to doctors and consumers anyway, reaping billions as their product laid waste to hundreds of thousands of lives. For years, this ghoulish clan had used its monetary connections to the Western world’s leading museums and universities, donning white gloves to cover up the blood on their hands. This infuriated Goldin—but it also spurred her to action. Banding together with a group of likeminded allies who came to form P.A.I.N. (Prescription Addiction Intervention Now), Goldin began pressuring cultural and academic institutions like the Met to distance themselves from the Sacklers and refuse the money that had bought them not just naming rights but also social impunity.

All the Beauty and the Bloodshed, which received the Golden Lion at this year’s Venice Film Festival, shows a marked expansion of Poitras’s filmmaking approach. It is a compelling, on-the-ground study of activistic struggle, waged by P.A.I.N. lieutenants like on-camera participants Harry Cullen and Megan Kapler and more briefly glimpsed allies across the globe, but presided over by Goldin. We watch the artist conduct chants at the Guggenheim and outside the Louvre, her trademark red ringlets ensuring her recognizability. She oversees countless meetings in her living room, dragging on a vape and cracking, with gravel in her voice, that the Sacklers should be the last people freed once prisons are abolished. This overarching political focus connects Poitras’s latest to something like her Oscar-winning Citizenfour (2014), a rigorous and resolute journalistic endeavor whose execution verges on the clinical; Poitras never fully breaches the divide separating the director from her hunted subject, Edward Snowden, nor seems particularly keen to be anything other than a fly on the wall. Poitras attempts a deeper inquiry into Julian Assange, the subject of her fascinating 2016 follow-up Risk, only to hit a brick wall in the guise of Assange’s imperious and insuperable cageyness.

Conversely, All the Beauty and the Bloodshed retains the impassioned clarity of Poitras’s style while enlisting its primary subject as its co-author. Goldin provides illuminating, clarifying, and always candid commentary on the many chapters of her life in one-on-one interviews with Poitras, conducted on weekends during COVID, included here under the agreement that Goldin would have final say over which of her words were included in the finished film. (She also served as a music consultant on the film, compiling an eclectic playlist that ranges from The Velvet Underground and A Taste of Honey to Lucinda Williams and The Facts of Life’s Charlotte Rae, singing the Brechtian ballad that inspired the title of Goldin’s landmark exhibition, The Ballad of Sexual Dependency.) A great deal of Poitras’s film is fittingly composed of Goldin’s work, presented to the audience in the photographer’s preferred format: the slideshow, which has long been the crux of Goldin’s practice. It is a simple yet immensely effective device—its clicks evince a pleasing tactility—that lets Goldin’s photography speak for itself and enhances the attention-seizing potency of her portraiture with its stark staging, electric colors, and magnetic characters. Several photo-heavy segments, like Goldin’s amorous adventures in a Provincetown lesbian separatist community or her years spent tending bar for pimps and sex workers at the Times Square haunt Tin Pan Alley, act as memoir and memorial, conserving convivial subcultures that have since vanished.

The screen teems with famous and unfamiliar faces who drift in and out of focus. Many are faces of the fallen, whose paths merged with Goldin’s and whose battles she facilitated and amplified through her cachet in the art world, because a friend’s battle was her battle too. There are Cookie Mueller, resplendent in her cracked, cat-eyed elegance, and David Wojnarowicz, who teamed up with Goldin as AIDS decimated their community for the show Witnesses: Against Our Vanishing, a first-of-its-kind response to the plague years that ran afoul of craven decision-makers at the National Endowment for the Arts. There is the fellow photographer David Armstrong, seen in a series of breathtaking shots as a teenage androgyne, whom Goldin met while both were shoplifting at a Boston supermarket; together, these two outcasts made each other free. There, too, is Goldin’s onetime boyfriend Brian, immortalized as a scowling and skulking seducer in The Ballad of Sexual Dependency, the man whose physical violence spurred Goldin to turn the camera on herself. By recording her body’s grisly aftereffects, the artist created the most self-confronting work of her career, documents of abuse that are also realizations of a guiding ethos conveyed by Goldin early in the film: “Photography was always a way to walk through fear.”

The weblike construction of Goldin’s past and present, achieved by editors Joe Bini, Amy Foote, and Brian A. Kates, gains a propulsive power while setting aside space for other struggles and recoveries unfolding in the here and now. Goldin is on the front line, but the fight is bigger than any single human being. In one of its greatest feats, Poitras’s film holds Goldin at its center without ever diminishing the insurgent power of the collective against the depravity of the Sacklers, who, in light of numerous lawsuits, declared bankruptcy on Purdue Pharma, though not before siphoning off $10 billion to fill their own coffers. The Sacklers’ many victims, living and perished, may not have yet received their justice or due revenge, but Poitras’s film ensures them a voice. One is not likely to forget the harrowing testimonies of those who join Goldin late in the film on a webcam deposition, in which various survivors and bereaved loved ones are invited to testify before members of the Sackler family.

Loss has galvanized these speakers, just as it has galvanized Goldin since childhood. In 1965, when Goldin was 11, her older, outspoken sister Barbara laid down on the tracks of a commuter rail and took her life. Erroneously labeled as mentally ill, seemingly at her mother’s behest, Barbara had spent years bouncing back and forth between institutions against her will. Barbara haunts All the Beauty and the Bloodshed, an iconoclast who could not cope with an intolerable world but made the sister who mourns and survives her into a fighter, a keeper of her flame.

In Poitras’s film, one artist of fierce and unflinching courage trains her gaze on a kindred spirit, meeting her at a pivotal and consequential juncture. This is not by-the-numbers biography or misty-eyed hagiography. It is a soul-shaking study of a woman creating a blueprint for both activistic struggle and a fearless existence, one in which expression—be it artistic, personal or political—knows no boundaries; all are spirit-strengthening, all are life-preserving. Goldin is approaching her 70th year, having outlived nearly all of her contemporaries and collaborators. But her work is far from finished. In line with her P.A.I.N. cohort, Goldin continues to petition the courts to seize the Sacklers’ assets and reallocate them towards measures like overdose prevention and harm reduction, advocating on behalf of addicts who have been shunned and incarcerated by a merciless world. And, in the midst of all this, Goldin continues to create new photography and video work. She has lost soul siblings and endured no shortage of pain, yet her fight carries onward. The fire still burns.