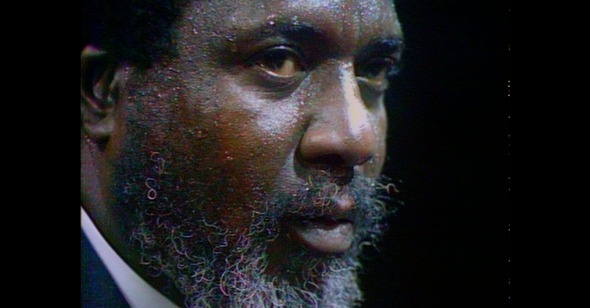 Well, You Needn’t
By Conor Williams

In December 1969, Thelonious Monk appeared on the French TV program Jazz Portrait, while he was in Paris on tour. Alain Gomis’s new film Rewind & Play goes back to the moment of that program’s production, uncovering the difficulties that took place behind the scenes. In verité footage at the start of the film, Monk seems to be a spectator himself, reticent, maybe shy, taking in his European surroundings and then the bustle of the TV studio with slight bemusement. Men stand around him discussing the continuity of the shots as he goes to work on the piano. The man interviewing Monk, Henri Renaud, is white, bespectacled, French, awkward. He’s told to lean on the piano. Hunched over, Renaud asks Monk about his wife, Nellie Smith. The musician replies matter of factly, “All I can say is she’s my wife. The mother of my kids.” Renaud doesn’t seem to know what to ask him. The only thing that apparently comes to mind is a pretty banal inquiry: “Thelonious Monk, why did you put your piano in your kitchen?” “That was the largest room in the apartment,” says Thelonious Monk, who seems rightfully spaced out. They redo this line of questioning more than once.

Rewind & Play is reminiscent of a found-footage doc that played New York Film Festival in 2020, Terence Dixon’s 1970 Meeting the Man: James Baldwin in Paris, in which the writer is subject in more ways than one to hostile, racist white interviewers. There are still some moments of beauty (thanks to Baldwin), but the film buzzes with an undeniable tension. Gomis’s intent in Rewind & Play is to unearth the painful moments not necessarily seen in what was broadcast in 1969.

Renaud asks Monk a question in French. The musician blinks and lets out a wheezy laugh. “I don’t understand. What are you asking me?” Renaud states a few times that Monk’s work was too avant-garde for French audiences to understand at first. Monk counters that when he got to France, he saw himself on the cover of a magazine, and would he be on the cover of a magazine in France if his work was too avant-garde for them? He makes a remark about being paid the least out of the musicians he played with. Renaud says they’ll cut that part because it’s “derogatory.” In a moment without audio, we watch Renaud grab Monk’s shoulders, trying to soothe him as he gets up from the piano bench. “How about going to this dinner and forgetting this TV program?” Monk pleads. “You asked me about the first time I came to France. The first time I came to France, I was ossified there.” “No, no,” Renaud says, “We won’t talk about that. It’s not nice.”

Occasionally, Gomis artificially emphasizes the tension of the encounter applying a spaced-out echo to Renaud’s meandering questions or cutting out the audio, which intentionally paints Renaud in an unflattering light. These flourishes are infrequent, which is for the better, as the footage has enough merit on its own—particularly, obviously, the moments when Monk performs. By the time Monk finishes his final performance, his face is sopping with perspiration. (When I saw the film, a man behind me applauded in his seat.)

For what it’s worth, the camera crew of Jazz Portrait manages to home in on some remarkable images between the awkward starts and stops of Renaud’s attempts at conversation. The frame is often filled by the gray wispy curls of Monk’s beard; in the film’s closing moments, the camera lingers silently on his face. His eyes wander, searching for clarity in the foreign whirlwind of the studio. Like Monk, the audience is left attempting to digest Renaud’s disquieting, trivial probing, all the while stunned by the rare bursts of beauty that the artist summons from the piano.

The image of an exhausted, perspiring Monk is the first we see in the film. Renaud, at the piano, says Monk was a part of the “Bauhaus of jazz.” Monk, meanwhile, dripping with sweat, is clearly coming down from just having performed. Gomis here fades out Renaud’s labeling of the artist, instead focusing on the jazz musician catching his breath. An artificial sound effect of Monk’s breathing fades in. In, out. In, out. A title card reads: Rewind & Play. But there is actually a subtitle: “It’s not nice?” If we know the context of Renaud’s dismissal of Monk’s honest recollections of his first visit to France, these few words, puzzling at the start, serve as an imagined retort from Monk to his host. Or rather, it serves as a retort from Alain Gomis, a French-Senegalese filmmaker grappling with the way a Black artist was treated by the mainstream.

What Gomis has uncovered in these rushes is fascinating, proof of the confines of bourgeois culture an artist such as Thelonious Monk was forced to endure in his time. We’re offered a glimpse into a few hours of Monk’s life, but apart from the actual footage of him entering the studio for the recording of Jazz Portrait, the viewer is intentionally given little else in terms of visual context for what occurs. Working within these specific parameters, Gomis deftly examines the dynamic between Monk and those responding to his work, then and now. There is much about Monk that seems to get lost in translation by Renaud, but Gomis’s film illuminates the musician in a light in which we’ve rarely seen him. Rewind & Play restages the record of an artist, subtly illustrating an imagined response to misinterpretation across decades of a masterful career of music.