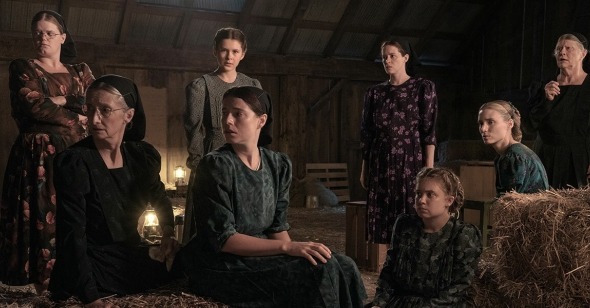 Can You Imagine?
by Caitlin Quinlan

They begin by washing each other’s feet. Two families of women from one Mennonite colony gather in a hayloft to prepare for what is to come by an act of ritual cleansing, just as Jesus is said to have done the day before his crucifixion. After a short prologue in both Miriam Toews’s novel and Sarah Polley’s new film adaptation, the central action of Women Talking is initiated by this scene of community caregiving and, perhaps, of resurrection.

What follows is very much laid out by its title—the women talk, openly and freely together for maybe the first time in their lives. Through the women’s conversation, we learn that the men of the colony are not around. Some have been jailed (and those who haven't are attempting to post their bail) after their longstanding sexual violence towards the women was finally witnessed firsthand by a teenage daughter of the community. For years, in some cases decades, the women have been waking up bloody and bruised, infected or pregnant, with no idea how. The religious leaders told them it was the devil, punishing them for their sins. Their own husbands, brothers, and sons were creeping into their rooms armed with animal tranquilizers to knock them unconscious while they committed their terrible deeds.

Left to themselves, the women (played by a starry cast including Claire Foy, Jessie Buckley, and Rooney Mara) decide they must take a form of action. They hold their first ever vote—do nothing, stay and fight, or leave—with each woman adding her own “X” to the option she favors. Forced into illiteracy due to the banishment of formal teaching for women in the colony, they refer to drawings to understand their choices, with very few selecting the first option. Not much is said of the women who would prefer to do nothing, and only a handful of scenes depict Frances McDormand’s Scarface Janz, the stern ringleader of this apathetic group. When it comes to deciding between staying and fighting or leaving, the families of Salome (Foy) and Mariche (Buckley) are elected as spokespeople and begin their deliberations. It is organized, formal, and fair, a formerly inconceivable chance for the women to discuss their future on their own terms. They even have someone to take the minutes, schoolteacher August (Ben Whishaw), who was once excommunicated for his parents’ rebellion and is one of the few male characters in the film.

“An act of female imagination,” is how the novel and film refer to their proceedings, but the source material is very much based in fact. Toews, born to Mennonite parents, was inspired by the crimes committed in the Manitoba Colony of Bolivia: between 2005 and 2009, eight Mennonite men repeatedly drugged and raped the women and young girls of their community. “Female imagination” is also how the colony condemned the victims, refusing to believe their suffering. “They make us disbelieve ourselves,” says Mejal (Michelle McLeod) at one point in the film, for her one of the deepest sorrows of their circumstances.

Imagination and belief: two words aligned with similarities yet different in inherent meaning. As the discussions get underway, more of these word pairings arise and cause conflict. What is it to flee versus to leave? What is it to grant forgiveness or to grant permission? Their predicament is not just a binary choice, it is to consider how to build a new future according to their own definitions. Toews writes, “Ah, says Salome, so you do have murderous thoughts. No, says Mariche, I told you. I only wish the men were dead.” Polley’s film is subsequently tidal, ebbing and flowing through arguments and agreements as the women’s voices take shape. It is theatrical in that sense, a chamber drama that could easily be transferred to the stage, with the story unfolding through the mere act of talking and listening in a nod to oral tradition. Salome and Mariche clash most frequently, both lost in their respective fury and weighing their trauma against one another’s. Mariche has endured the abuse of her husband as well as the other men for years, while Salome is crushed by the discovery that her four-year-old daughter has been attacked and still mourns the suicide of her sister, who had been devastated by her own victimization. Each woman bears her torture in whatever way she can. There is something a little didactic about the film’s overall conceit, in which each voice is listened to in turn and each moral stance presented to unveil all sides of the debate, but this approach also speaks to the film’s central preoccupation with articulation and documentation. For these women, it is crucial to have the space to form an opinion or to present an argument when you have previously been denied knowledge.

These interests in language and interpretation, the challenge to form ideas without a common, social framework, make for some of the film’s most compelling aspects. Where things are a little more muddled is Polley’s grappling with the feminist angling of the story. The film is posited as an act of imagination, yet the scope of that imagination is closely confined to the hayloft and limited by how the women are defined in relation to the men who have abused them.Their personality types are either angry or docile, and there is little interest in exploring who these women actually are or what they care about beyond religion or their children in this moment of fictional freedom.

Furthermore, August is revered by some of the women in a way that feels like an unnecessary acknowledgment of the possibility of “good” men. The line “not all men” is uttered once in the film, and is admittedly taken from the book, but perhaps Polley could have easily jettisoned such an eye-rolling slogan that has become its own intolerable cliché through undermining women’s movements in the wake of #MeToo. Needing August to document the meeting has a contextual logic and offers a nod to the importance of laying claim to words through the act of writing, but it also invites many of the film’s more cloying and forced moments. Whishaw is a little too simpering, soppy with affection for one of the women, Ona (Mara), and explicitly submissive to the others during the deliberations when he wants to offer an opinion. When he is berated, by Mariche most often, for talking over the women or daring to suggest paths of action, his character becomes an easy narrative foil. It’s a clunky way to depict these gender dynamics when his allyship through listening and recording would have been enough.

It’s a film almost devoid of color, not quite black-and-white but graded into a grayscale that washes all life from the frame. Offering more intensity is the color of the women’s bruises and their blood, soaked into bedsheets or smeared across the walls by those on the verge of madness from their trauma. Again, it’s a little too obvious a choice to have the women’s blood be the only visually striking element, and, when coupled with a few Malickian golden hour shots towards the end of the film, it denies the film a more subtle aesthetic personality. The actors are undeniably compelling, working with monologues that grant them the space for profound emotional release, particularly Foy and Buckley, but this adds to the broadly stagy quality of the film.

Yet the deliberate narrativization of the film’s ideas and the transparency of the visual choices may be the point. This act of imagination is about creating space for these fictional women to detail their workings out of some of the biggest questions they’ve faced, to talk through meaning and choice as if it never existed before. To speak plainly and clearly is part of this radical act of self-creation. It’s not all so drearily serious either—Polley uses beats of humor to vary the film’s tone, whether it’s elder Greta (Sheila McCarthy) boring the group with parables about her horses Ruth and Cheryl, or one of the youngsters correcting an aunt on the correct use of “fuck off.”

Women Talking feels weighed down by its subject matter, at times succumbing to that burden by opting for the easier path of following broad themes and open targets. At other times, as the characters sit in the barn and gaze out over vast skies and fields, the film feels light and expansive, ideas floating in the women's midst until they alight on the right ones. The women are not fleeing, they are leaving. With this decisive verb, chosen by the women together, the world changes shape around them.