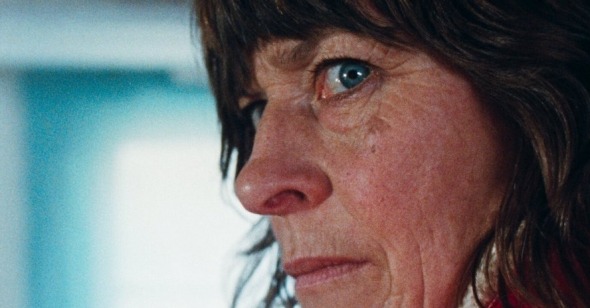 This summer, when I was putting together my preliminary list for the upcoming decennial Sight and Sound poll of the best films of all time, I was struck by how many of my selections were made under the sign of Maya Deren and Alexander Hammid’s American avant-garde landmark Meshes of the Afternoon (1944)—one of the first experimental films I encountered in my undergrad, and evidently the one that left the most lasting impression.

In both simple narrative outline and complex philosophical terms, Meshes—shot in Los Angeles the summer after its Kiev-born co-director and star changed her given name from Eleanora to the more mythically charged moniker of Maya—describes a somnambulistic encounter with the self. Whilst innocently dozing at home, a young woman (Deren) dreams herself into a fraught psychic space haunted by a mirror-faced assassin, only to wake to the realization that she’s the one holding the knife. For all the debate over the film’s authorship (including claims by no less than Stan Brakhage that Hammid was the prime mover in its creation), it’s Deren’s charisma as a performer and camera subject that lingers; in terms of the onscreen world, female experience is privileged, with masculinity just a malevolent cipher.

Shot and edited as much in homage to the lo-fi illusionism of Georges Méliès as to the more of-cited Surrealists and charged with the murderous sexual paranoia of vintage film noir, Meshes of the Afternoon doesn’t require dialogue to be loquacious; synced percussively to the rhythmic beat of Teiji Ito’s score (added more than a decade after the fact) it feels like the primal scene of the creeping, recursive morbidity that courses through everything from La Jetée (1962) to Bad Girls Go to Hell (1965) to Muholland Dr. (2001). Its winding, labyrinthine settings and central images of a lurking, hooded figure and a gleaming, hidden knife, meanwhile, anticipate the spatial and symbolic syntax of Don’t Look Now (1973)—my personal favorite movie, largely for the way it meshes Deren and Hammid’s sense of menacing, oneiric abstraction with more concrete feelings of grief and loss.

I don’t know for sure that my own private Venn diagram overlaps with Mark Jenkin’s, but there are enough trace elements of both Meshes of the Afternoon and Don’t Look Now in the Cornish director’s new feature Enys Men that I’d feel confident in placing our interests on the same wavelength. And given that “wavelength”—or, more specifically, a fragmented, subjective perception of the ephemeral—is arguably the film’s subject as well as its aesthetic, that’s enough to make me sympathetic to what is inevitably (and by design) a polarizing project. Shot entirely in and around a small, windswept, geographically isolated island in the Celtic Sea in hardscrabble 16mm textures (with the director doubling as DP) that don’t so much deny the landscape’s pastoral potential as revise it, Enys Men offers up a stark, forbidding vision that’s closely adjacent to recent UK forays into folk-horror. But where a filmmaker like Ben Wheatley leverages commercial savvy against his alienation effects (even in a film as willfully unhinged as 2013’s A Field in England), Jenkin is determined to exhaustively withhold or deflate genre satisfactions. Whether this coyness is a matter of principle or perversity is hard to say for sure, but either way, Enys Men feels as stubborn and solid as the stone monolith perched at the edge of its desolate setting; the cinematic equivalent of a modest yet immovable object, an impassive and ruggedly beautiful site of contemplation.

In the absence of much spoken dialogue, the written word carries extra emphasis in Enys Men; in this context, the scribbled notation “no change,” logged daily by the taciturn middle-aged woman (Mary Woodvine) who’s living and working solo on the island as a kind of caretaker-slash-botanical researcher, takes on the ring of a mantra, or a warning. Subtle variations across an otherwise stable field is a hallmark of structuralist filmmaking, from Wavelength to Jeanne Dielman to Paranormal Activity, and the interlacing of crypto-occult signifiers (flowers, stones, monuments) with a more scientific species of ritualism (centered on the decidedly non-Gothic phenomenon of soil temperature) is where Jenkin simultaneously entrances and cockblocks his more shock (or maybe schlock)-hungry viewership. Because Woodvine’s character, only known as The Volunteer is such a potently lonely archetype—not just the proverbial Final Girl in a potentially haunted milieu, but the Only Girl—we’re primed for her to encounter apparitions on her daily rounds. She does, but the visions she sees of pagan ceremonies and static, staring islanders aren’t particularly scary or startling. They are, instead, somewhat exhausted, their capacity for terror diminished by time and neglect. In most ghost stories, the present is somehow threatened or invaded by the past and its intimations of unfinished business; there’s some sense of threat. Here, the Volunteer never seems to be in peril, or even terrified. The emphasis, rather, is on the fact that the things she sees are gone: the barely glimpsed remnants of a vanished community, of individual tragedies (including, perhaps, a few related to her own family tree) adrift and aloft in the pitiless slipstream of time.

It’s here that the question of what Enys Men is “about”—and how it relates to the ethnographic impulse of its director’s previous, fisherman-themed hybrid fiction Bait (2019)—can be raised, and maybe even resolved. If there are loftier reasons to make movies than to document and enshrine one’s immediate physical environment, there are also plenty of worse ones, and Jenkin has a good enough eye for color (local and otherwise) and composition to make his mix of regionalism and formalism beguiling. As for the folk-horror pretense, it may just be a little bit of gamesmanship, undertaken with enough reverence for its reference points to ward off charges of bad faith. In interviews, Jenkin has implied that the chronological and ontological fuzziness of the film’s presentation is purposeful, and that an interpretively minded viewer could, if inclined, reconstruct some sort of linear, cause-and-effect explanation across multiple viewings. He should stop right there, though, because the achievement of Enys Men resides in its embrace of ambiguity, not as a get-out-jail-free-card or a means to an end but a source of pleasure in and of itself.

The reason that Meshes of the Afternoon casts such a long shadow—and has withstood so many decades of voluminous, undergraduate deconstructions—is because its makers intuitively understood the relationship between their work’s carefully delineated, even claustrophobic formal borders and the spaciousness of its meaning. Besides evoking the oneiric and the impossible, Meshes is a genuinely uncanny object in that it’s somehow larger on the inside than the outside. I’m not sure that Enys Men will stand the test of time, or find itself nearly so weathered by analysis, but its respect for a certain enigmatic filmic tradition—expressed more plangently by its bygone, tactile fetishism than any prosaic ideas on history, identity, or mortality—makes for a solid enough foundation. For people who like this sort of thing, it’s the sort of thing that they’ll like, and maybe they’ll even like it very much. All Jenkin requires for his trick to work is a willing Volunteer. Step right up.