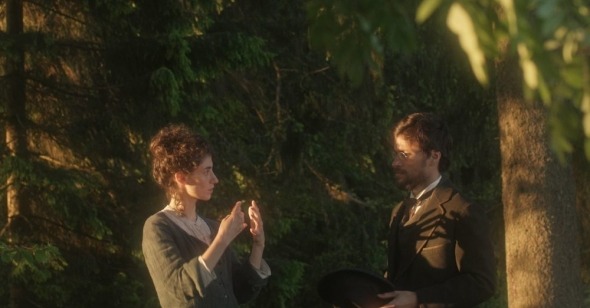 Time and Anarchy
By Lawrence Garcia

Set during the 1870s in the Swiss watchmaking town of Saint-Imier, Cyril Schäublin’s Unrest exists at the confluence two crucial historical currents. Its title refers to the part of a watch known as the unrueh or balance wheel, whose oscillations regulate the entire mechanism, and thus to the rapid consolidation of factory labor that occurred in the late 19th century. But it also refers to the rising tide of anarchism during the era, and the waves of anti-authoritarian sentiment which would eventually ripple through the region. That this minuscule, all but invisible part of the watch should be connected to phenomena of such a different order is part and parcel of Schäublin’s canny conceptual design. For the 19th century saw myriad attempts to unify a vast range of human activity under one rhythm or periodicity—to synchronize the world under one temporal order. This drive is emblematized in the regulation of Saint-Imier itself, which runs on four distinct times: factory time, municipal time, telegraph time, and railway time. Those advocating for each one had their personal, often profit-driven reasons for doing so. The question was not whether it would be desirable to maintain only one of these temporal rhythms, but which one should prevail?

When the film begins, Russian nobleman and cartographer Pyotr Kropotkin (Alexei Evstratov) has just arrived in Saint-Imier, where he immediately encounters Josephine (Clara Gostynski), a factory worker whom he asks for directions. The main goal of his visit is to produce a new map of the area, but his interest quickly gravitates toward the local politics, particularly the nascent anarchist commune Josephine likewise becomes drawn to. From early on, then, Unrest suggests at least three foci of potential interest: a fine-tuned study of the watchmaking process and factory life; a granular depiction of municipal governance, taxation, and rising political tensions; and a dramatic development of the relationship between Pyotr and Josephine.

But while Unrest gestures toward all of the above, it cannot accommodate the full range of every possibility. More than this, it shows how every choice of rhythm allows us to recognize only a certain range of phenomena while necessarily restricting others. In a film as different as Michael Snow’s Wavelength (1967), whose 45-minute zoom takes us from one end of an apartment loft to another, we see how each reframing of the space—each choice of wavelength, so to speak—precludes some possibilities while opening others. Four incidents involving people are scattered across Wavelength’s runtime, but the film clearly cannot accommodate their full narrative range. Similarly in Unrest, and against the expectations created by their early meeting, we do not see Pyotr and Josephine interact for most of the film, which remains focused on their individual, work-related activities. In keeping with this approach, Unrest’s dialogue is geared more to depicting the material workings of the town than toward developing any human-scale drama. The film’s mesmeric visuals and scene-to-scene rhythms likewise resist our inclination to emotionally identify with its human figures. Schäublin’s unerring compositional eye alternates between extreme close-ups of the watch-making process and oblique wide shots that thrust human figures into the margins, allowing tree trunks, roofs, and other non-human elements to dominate the frame. Severe but not jarring, these shifts in scale mainly serve to draw parallels between the timepiece mechanisms and the constant hum of activity in Saint-Imier. An image of a woman working between two large waterwheels strikingly, unambiguously conveys the integration of human labor into machinic systems.

Schäublin’s mise-en-scène thus accentuates, and thereby forces us to reconsider, the era’s drive toward total order—which has only intensified in the present day. Novel technologies made possible more precise forms of measurement, fueling a mania for efficiency from which nothing was exempt. Foremost in such efforts was the quantification of industrial labor and worker performance. But in Unrest, we see insistent attempts to structure even the simple act of walking through the town, with trip times of different paths continually compared in order to find the most efficient route. In this regard, Josephine and her (mostly female) fellow workers are in the unenviable position of making the very tools used to measure their labor, and by extension their lives. Near the film’s midpoint, we see an elderly woman sentenced to ten days in the county jail for not having paid her taxes, at a rate of one franc 11 centimes per day. Both the municipality and the factory have agreed that she may take her work tools with her to jail, which she is told “will even help you with your financial situation.” Evidently, someone has done her the dubious favor of running the numbers.

There is something obviously inhumane about this totalizing drive toward efficiency, which sees anything and everything as reducible to quantity and mechanism. In the eerie dispassion with which the woman’s sentence is delivered, we see the dangers of reducing experience to a single rhythm. There is a peril in thinking that when one has measured or quantified time, one has accounted for lived duration. In Unrest, such issues are further intertwined with contemporaneous debates surrounding nationalism and self-governance—or, in short, the anarchist question. And though Schäublin cannot answer all the issues he raises, his main point is that no one theory of governance—much less one film—can ever be adequate to such a task. In other words, it is dangerous to think that when one uses a concept such as “state” or “nation,” one has adequately dealt with, say, the town, the family, the individual. In Unrest, one man sardonically remarks that for anarchists, a territory is not a state or nation, but simply “a place that we live in together at any moment.” Schäublin adopts an anarchist position to the extent of showing how “a place that we live in together at any moment” is just as real and useful a category as “nation” or “state.” Each concept implies a distinct scale of analysis and cannot be reduced to another without something—perhaps the human element—being lost. After all, even in an era of atomic clocks, there is good reason that we mark time by the cycles of the sun rather than the oscillations of a Cesium atom. As the 19th-century French mathematician Henri Poincaré once remarked, “Should a naturalist who had never studied the elephant except by means of the microscope think himself sufficiently acquainted with that animal?” In science and politics both, it is the scale that makes the phenomenon.

The mechanistic theory of nature, on which much scientific and technological advancement is founded, operates precisely by reducing all phenomena to a single quantifiable scale. And it justified itself on pragmatic grounds. It worked. But in returning to a historical moment where this theory was on the verge of expanding to all areas of society, beyond its proper scientific domain, Unrest suggests that we would do well to ask just what it means for something to “work.” It forces us to consider whether our implicit definitions of “working” have not in fact left out the human element. If present-day labor politics are any indication, it’s clear that questions such as Poincaré’s stopped being raised—or at any rate stopped being heard. In retrospect we can now see the late 19th century as a crucial turning point. And by immersing us so completely into the internal rhythms of the era, Unrest thus points to the road not taken.

Toward the end of the film, Pyotr and Josephine take a leisurely stroll through the woods on the outskirts of Saint-Imier. In their first meeting, they had taken a shortcut through town; this time, they go the scenic route, even allowing themselves to become a little lost. When we cut back to Saint-Imier, we hear that both Pyotr and Josephine have disappeared. Evidently, we have jumped some time into the future—though by how much we have no means of telling. The film’s final shot returns us to the site of their last meeting, where we see a watch hanging on a tree branch—a literal suspension of time. The cycle of their story has finally gone beyond that of the film. And if the scale does indeed make the phenomenon, we will not see them again. We might say that their story has passed into the order of folktale, myth, and legend, tales conventionally associated with the imaginary, and typically accorded a sense of unreality. Then again, we might finally ask whether what we call reality is, in fact, a matter of rhythm.