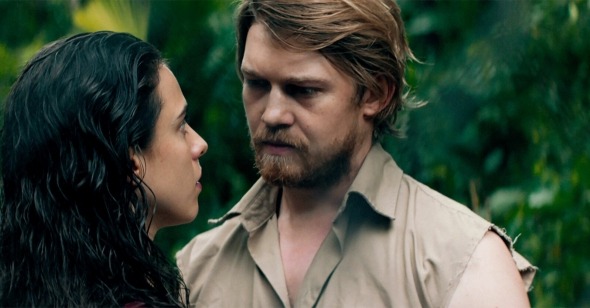 Smoke Gets in Your Eyes
By Adam Nayman

In 2016, Xavier Dolan received some of the worst reviews of his career following the Cannes premiere of It’s Only the End of the World, only to be redeemed by an unexpected and polarizing Grand Prix: an award that would live in infamy had Dolan’s acceptance speech not also yielded that all-time great (and subsequently much memed) Mads Mikkelsen reaction shot. I am, of course, asking for trouble by forcing a comparison between Dolan and Claire Denis—directors who are almost perfectly antipodal in my own personal cinematic canon—but the latter’s runner-up citation this past May at Cannes for Stars at Noon felt, to me, similarly, like a jury trying, on some level, to stick it to unkind critics, with the added incestuous subtext of the prize being bestowed by Claire’s friend Vincent Lindon, fresh off promoting his turn in Denis’s Both Sides of the Blade in Berlin.

For those of us playing the festival-circuit home game, rubbernecking on Twitter and Letterboxd is not an honorable pastime. But it is addictive, and as the underwhelmed-to-mortified reactions to Stars kept rolling in—including several dismissals from writers I trust—it was all I could do to not take them personally. A paradox, at once sincere and vexing: the obvious extent to which a filmmaker as self-possessed and ornery (and brilliant) as Claire Denis does not need white knights riding to her rescue is precisely what compels some of us to saddle up in the first place, on top of which it’s worth remembering that the films of hers which got the roughest initial receptions are also historically among her best. If Cannes’ 21st-century fetish for envelope-pushing artsploitation à la Titane can, on some level, be traced back to the festival programming Trouble Every Day back in 2001, it’s not like people liked Denis’s gruesome masterpiece at the time; I still remember encountering the director the morning after L’intrus screened at TIFF in 2004 and how she seemed almost unsteady on her feet based on baffled audience reactions.

Rehashing some of the ruder social media comments that were made this year at Cannes about Denis and her supposedly diminishing abilities isn’t necessary, but it does contextualize the strangely desultory vibes around Stars at Noon, Grand Prix notwithstanding. (The film screens at the New York Film Festival before a swift day-and-date release via A24, whose marketers failed to make High Life into a left-field genre hit). Blogging, as it turns out, is what got Stars’ heroine into her particular pickle. Stranded in the Nicaraguan capital of Managua without a passport and subsisting—thinly—on the kindness of strangers, Trish (Margaret Qualley) is a journalist in search of an editor she hasn’t already burned, or maybe one who’s willing to be fooled again in return for a few hundred American dollars. The implication is that her writing is of the cage-rattling variety, and not only for her subjects. A fraught Zoom call with her former boss—a one-scene, resplendently disheveled cameo by John C. Reilly in Steve Brule mode—reveals that Trish hasn’t been on assignment, for him or anybody, in quite some time, and that whatever currency she may possess as a muckraker has gotten co-opted or corrupted by the local scene. Any criticisms Trish may have of the Nicaraguan government and its tactics of surveillance and detainment is undercut by the fact that, as the film opens, she’s fucking an army lieutenant for protection; no sooner have they finished than he’s confiscating her passport for dubious safekeeping.

Whether stalking the streets or sidling up to lonely businessmen in hotel bars, Trish has the shark-eyed look of a survivor who’s cognizant of her own need to keep moving, or else; the same reckless, improvisational flair that allows her to navigate this humid Central American purgatory is also the thing likely to keep her imprisoned there. Of all the characters in Denis’s oeuvre, the one she most recalls is Maria Vial, the stubborn, resourceful, French coffee-plantation magnate clinging to the family business in the midst of an African civil war in White Material (2009). That film marked Denis’s first-ever collaboration with a genuine, above-the-title international movie star, and Isabelle Huppert’s acting set the tone and tempo in a different way than any of her predecessors (as it had for Michael Haneke, Paul Verhoeven, and Hong Sangsoo, for whom she was, of course, playing Claire Denis). Because Huppert is at this point incapable of fully disappearing into a role, she finds ways to make her ubiquity and celebrity work for her; in White Material, the same fierce iconicity that makes Maria stand out from the other characters (white or Black) informs the tragic potency of her late, avenging-angel transformation and bleakly cosmic comeuppance.

At 27 and gamely trying to parlay her It Girl status into worthwhile projects, Qualley doesn’t have the same aura to fall back on. Her funny, fleeting role as brainwashed jailbait in Once Upon a Time… in Hollywood—which caught Denis’s eye in 2019 along with everybody else’s—exists in sexy, breezy counterpoint to the different, tangy flavors of middle-aged narcissism and self-pity at the center of Quentin Tarantino’s L.A. epic; she’s playing the personification of temptation, and that’s about it. Circumstances have reduced the educated, worldly Trish to a species of Pussycat’s kamikaze pickup artistry, but for Stars at Noon to work—and remember, this is a movie that, in the minds of a lot of tastemakers, does not work at all—we have to believe that, either in defiance of her cynically contingent worldview, or else as an unconscious byproduct of it, Qualley’s character would let down her guard enough to fall in love with a fellow outsider beginning his own downward spiral. That’d be Daniel (Joe Alwyn), an industrial something-or-other who’s happier than most tourists to pick up Trish’s drink tab (and to meet her price for extracurricular activities) and whose ivory suit signals an entirely disingenuous purity: a white knight who wears his tarnish on the inside, perhaps, or, more worryingly, a fox in sheep’s clothing.

There is a lot of plot in Stars at Noon—shifting allegiances, ulterior motives, and third-party observers who either want specific things from Trish and Daniel or feel threatened by their romantic coupling. In narrative terms, it may be the most complex movie Denis has ever made (and officially the longest), especially since her previous ventures into similarly, putatively thriller-ish territory—the Gothic wing of her filmography housing Trouble Every Day, L’intrus, Bastards, and High Life—tend towards a kind of willful ellipticalness that renders connections between characters either incomplete or irrelevant. In adapting Denis Johnson’s 1984 novel, which was set at the moment of its publication, Denis and her co-writers Lea Mysius and Andrew Litvak have dispensed with any period-piece pretense, and the vagueness of the political material—which remains ambient rather than directly articulated—could be taken as a commentary on the essentially circular logic of authoritarianism, or perhaps on the United States’ eternal role as a meddling, less-than-innocent hemispherical bystander. Call it U.S. Go Home: where in the past Denis has either avoided or abstracted America (“that’s Denver,” whispers Vincent Gallo as he looks through an airplane window at a blinking grid of lights in Trouble Every Day), here some version of its essence manifests in Trish’s demagnetized-to-haywire moral compass and the predatory gentility of the civilian operative played—wonderfully—by Bennie Safdie (like Reilly, an emissary of the auteur-driven American cinema Denis admires without ever necessarily emulating).

Given a pair of warm bodies and a bed to work with, Denis is peerless at choreographing physical intimacy, and Trish and Daniel’s initial flirtations—including a half-funny, half-tense escapade through a local market where they think they’re being tailed—have some of the same giddy, anticipatory throb as Friday Night. As long as things are more or less transactional, Trish and Daniel hold our attention, but the slow-burning love story is harder to swallow. Alwyn is a skilled, focused actor, but he’s also a little bit bland, and his performance can’t help but be affected by the knowledge that Denis had originally wanted to cast Robert Pattinson, a superior camera subject (and box-office draw) who would have carried a very different charisma into the role. Alwyn’s cipher-like quality works for a character who holds his cards close to his chest, but as to whether he generates the sort of ambiguity that invites desperate, life-or-death obsession—either from a sinuous, experienced, feline operator like Trish or the audience at large—well, it’s hard to imagine any sort of positive consensus. It’d be one thing if we got the sense that these two desperate characters were dangerously wrong for each other, but it’s more like they’re being shoved together by the script: the almost hypnotic autonomy that Denis usually confers on her protagonists—the way her characters push against not only obstacles and each other but the boundaries of the movie itself—is swapped out for a more mechanical brand of manipulation. As a result, nightmarishly violent imagery and quasi-action-movie intensity of the closing passages is weirdly rote, as it was (at least for me) in White Material, with its ceremonially murdered child soldiers, a rare case of a filmmaker allergic to sentiment or sensationalism indulging in a bit of both.

Unsurprisingly, Stars at Noon is never less than compelling to look at and listen to; as much as I miss the vivid, sculptural tactility of Agnès Godard’s cinematography (an absence surely felt amidst the murk of Both Sides of the Blade), Eric Gautier’s dingy, low-light set-ups, evoking a world of shadowy backstories and cloaked motives, are on point, and the score by Stuart Staples and Tindersticks is their best for Denis in a decade and a half—haunted and melodic enough to stand being foregrounded during a clingy, wee hours slow-dance that skirts auteurist self-parody but still works in spite of (because of?) its swoony familiarity. The casual, almost preternatural command of sound and image that defines Denis’s cinema offers rewards apart from her sometimes labored left-to-right storytelling, but it’s also fair to say that at her best—which Stars at Noon is not—the two are interlaced at molecular level. In L’intrus, the narrative is conveyed and experienced almost phenomenologically through the bodies and landscapes; its eloquence lies largely in the exquisite structuring of its absences. Here, it’s more as if the director’s style and sensibility are being applied, deliberately and decorously, and even if there’s been no actual, practical shift in Denis’s process (or approach), the difference is palpable.

Stars at Noon concludes with a tidy, if predictable, bit of symmetry—an act of engineering from a director who’s usually better at submerging her blueprints (or throwing them out all together). It’s a fine line between exhilaration and exhaustion, and few directors have Denis’s gift for inhabiting and understanding the bone-deep tiredness of characters who’ve been worn down to the nub by their own stubbornness—maybe because their battering-ram ethos is in some way an extension of her own. Even if it hadn’t been reported that Denis was rushing to finish the edit in time for Cannes, there’s a palpable sense of somebody or something running on empty: a late image of a parked car set ablaze before it can serve its purpose as an escape vehicle proves weirdly apt. Stars at Noon is a movie consumed by sensations of burnout; that its stray embers still glow like they do speaks to a spark of artistry that isn’t going out anytime soon.