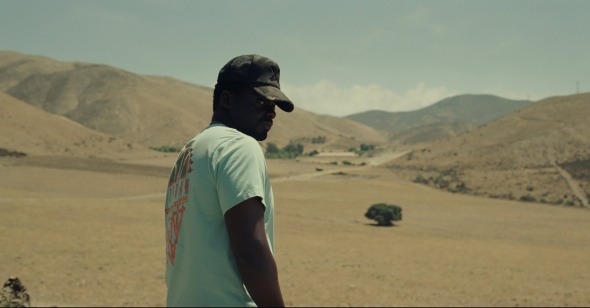 A Wider Frame
By Nicholas Russell

David Fincher once said “If the film does well, I’m going to get too much credit. If it does badly, I’m going to get too much blame.” Of course, to even think about the difficulties and compromises of auteurism, first you have to get your foot in the door. How one gets a start in Hollywood is determined by various factors, status and access foremost among them. The uphill climb, presented in the industry's own mythology as difficult for anyone regardless of background or connection, is far more discouraging, humiliating, and sometimes deadly for the marginalized.

Jordan Peele’s Nope keeps this legacy in mind, interrogates it, while simultaneously exploring a trenchant, disturbing thesis: the ambitions we chase are as unforgiving and carnivorous as the barriers to entry. Peele’s reputation after just three films is of a filmmaker who endeavors to thread neglected history with contemporary oversights. His films, so far, have revolved around the underestimation, exploitation, and commodification of identity. His own statement of purpose, Get Out, set a new standard for black horror cinema, quickly cementing his changeover from television comedian to capable film director (while also inspiring lesser copycats who mistook an emphasis on trauma and misery for compelling storytelling). In Nope, the primary component is spectacle, that which titillates and arrests though typically, in Peele’s estimation, at the expense of truly understanding what we’re seeing. In a recent interview with The Today Show, the writer-director gave the example of passersby on a highway slowing down to catch a glimpse of a terrible accident. Peele opens that idea up wide, to encompass not just sociological ills but also cinematic myths: film as an imperfect vehicle for processing trauma, the blockbuster as the trivialization of the thorny past.

Set in the arid, expansive valleys of Agua Dulce, just outside of Los Angeles, Nope is a sci-fi horror thriller mired in cinematic reference (Jaws, Poltergeist, Close Encounters of the Third Kind, Akira, The McPherson Tape, Signs) without collapsing under that weight. The film follows the Haywoods, a family of black horse trainers descended from Alistair Haywood, a jockey who was filmed for the first-ever motion picture by Eadweard Muybridge. The Haywood patriarch, Otis, Sr. (Keith David), has just been killed by a mysterious hail of debris falling from the sky (notably, in keeping with the film’s paradoxical critique of movies profiting from trauma, a buffalo nickel through the eye), leaving his son, Otis, Jr. (Daniel Kaluuya), to tend a family heritage he nurtures more through quiet hard work than voluble advocacy. In the days and months after his father’s death, OJ struggles to keep the family business afloat, due to a lack of experience in the industry and the kind of social marketing skills that smooth over uncomfortable interactions with bloviating executives on film sets. OJ’s estranged sister Emerald (Keke Palmer) steps up in the wake of her father’s passing—she’s the more charming, fashionable, and outspoken of the two siblings, also trying to make her own way as an entertainment jack-of-all-trades.

Early in the film, Peele makes several astute observations about the nature of filmmaking, particularly its contradictory “need experience to get experience” process, one of multiple hurdles faced by hopeful black entrants. Even OJ, heir to the only black-owned horse-training business in Hollywood, has to prove his competency to an impatient, dismissive industry all too eager to cede the aggravations of real-life collaboration to the frictionless, weightless conveniences of CGI; when OJ is fired from a gig after a film crew neglects his warnings not to provoke a horse, we see a green-screen horse replica being wheeled into the background.

Back at the family ranch, OJ and Emerald chart a short but rocky reacquaintance with one another, a relationship further soured by the fact that OJ has been selling horses to keep the lights on. The buyer, a carnival next door to the ranch called Jupiter’s Claim, is owned by former child star Ricky “Jupe” Park (Steven Yeun). Peele’s fascination with the artifice and candy-coated colonial legacies of the carnival, illustrated to disturbing effect in Us, returns here, though knotted with an altogether less abstracted commentary. It would be enough for Peele to suggest that Jupe’s trading in his fame as the Asian kid from the fictional TV show Kid Sheriff (note the coin in the show’s logo, the same that killed OJ and Emerald’s father) for a Western-themed amusement park illustrates a common compromise for people of color who must find ways to survive in unforgiving places, sometimes by cannibalizing their own histories.

But Peele delves deeper. Jupe is also known as a survivor of the infamous Gordy’s Home incident from 1998, a sitcom cut short when the star, a trained chimpanzee, “reached his limit” and violently attacked the human cast. Jupe, just a boy at the time, was the only cast member who came away physically unscathed. Instead, he harbors internal scars, which he papers over with morbid reverence for the episode. In his office, behind a secret entrance, Jupe has built a shrine filled with Gordy’s Home memorabilia, going so far as to accept a Dutch couple’s $50,000 entreaty to spend a night inside it. When Emerald asks what really happened on set that day, Jupe deflects any real recollection and instead points her to an SNL sketch that parodied it. Art imitates life, Jupe seems to say, and sometimes to much better, or at least simpler, effect. When we do finally see the actual event, Peele films the sequence, as he does all of Nope’s standout set pieces, with much of the action obscured or just out of frame until the right moment.

Here, Peele seeds two key thematic threads: that of the beast who can never be tamed, a creature deserving of respect as much as wariness, and that of the foolish trainer who believes they can break or tame it. As OJ and Emerald settle into the large, empty house on the Haywood ranch, a UFO appears in the night sky, shutting down electronics and spooking the horses, who run off into the darkness only to disappear, seemingly sucked up in a dust devil that reaches up to the clouds. The Haywoods swiftly resolve to capture the UFO on video in the hopes that they might not only make a nice chunk of change but also preserve or even embolden their family name. Along the way, they enlist the help of Fry’s Electronics employee Angel (Brandon Perea) and famous cinematographer Antlers Holst (Michael Wincott) to help surveil and secure the money shot.

One of the most beguiling and pleasurable aspects of Nope is its nimble handling of these various plotlines, echoed by the multifaceted ways the film’s title is used as a refusal, a denial, an acknowledgment, and an affirmation. It is a movie about making movies at the same time that it is a movie about how we consume them. It is a somber commentary on the ways black people try to grasp greased rungs on a ladder to temporary success while also an indictment of the ways people of color try to mold themselves into torturous shapes in order to fit in. It is a rallying cry for the tactile superiority of film (Nope was partially shot on 65mm for IMAX), less a finger-wagging screed against digital than a testament to the perfect marriage of all manner of cinematic technologies in order to more effectively furnish feeling. It is a loving continuation of the novel ingenuities of creature design, with what has to be one of the most beautiful and terrifying aliens ever conceived for the screen: a huge, sail-like, refreshingly non-anthropomorphic being modeled on deep-sea wildlife. It is also, perhaps less explicitly, though no less impressively, a recapitulation of the power that tried-and-true filmmaking techniques grant a film. Despite many lazy comparisons by commentators to Spielberg, Peele is not slavish to any one director the same way that DP Hoyte van Hoytema is not slavish to any one cinematographer. Rather, they utilize space and time (Nope has one of the best mainstream buildups and climaxes in recent memory) to establish their setting, immersing the audience in texture and atmosphere while also capturing the grandeur and chaos of the film’s later action in as wide and, consequently, as disturbing a frame as possible.

As noted, Nope is Peele’s third film as a director, and it’s worth taking a moment to think about why this is so important to engaging with his work. Few artists have been put in the same position as Peele, a black director whose films generate a level of anticipation and overwrought didacticism that exaggerates or downright misrepresents what he’s really trying to achieve. To be sure, Peele has had his own hand in fostering some of this reputation, as he’s produced Spike Lee’s critically acclaimed, watery BlacKkKlansman, a passable Twilight Zone reboot, the cloying HBO eldritch horror series Lovecraft Country, and the abominable reboot of Candyman. The degree to which Peele’s involvement shaped the final product of these projects is worth pondering. More interesting is to look at the thematic throughlines they share with Peele’s directorial work.

If Get Out, with its potent premise about soul-sucking white opportunists purely interested in the utility and exoticism of the black body, and its commitment to B-movie horror viscera and unflinching racial commentary (much of which was immediately memed and defanged by the very people Peele was talking about), was a calling card, then Us, about the literal underground secrets that return to haunt the blood-soaked soil of modern America, was a far messier, more ambitious, and almost intentionally divisive effort to step out from his own shadow. In each film, Peele has set out to craft something beyond “simply” race, beyond outmoded tropes of family and suffering, upheaval and triumph. His view of the past is not linear, though it is cumulative, always foregrounding the consequential outcomes of ignorance. But it is Peele’s enthusiasm for film and musical history (always including perfectly curated needle drops) that sets him apart, marshalling mastery of such knowledge in an attempt to make something new.

Nope would seem to be the work of an older artist, the kind of thing one makes after years of trial and error. It’s really the ideal culmination of all that the hyper-consumption of pop culture might bring to bear, a literate, confidently rendered movie fluent in the visual language of the blockbuster that could only exist on such a large scale. Peele’s eye for detail and for lasting, austere images see its full potential here. There are too many to choose from—a house showered in viscera and trash, a shoe stood on its heel with a single drop of blood near the toe, the outstretched, nearly bumping fists of a child and a monkey—but the one I continue to think about in the days after seeing Nope is of a key plunged halfway into a white horse’s backside. In a film of mysterious but legible symbolism and metaphor, the key is one of a few enigmatic images that feel loaded with meaning, even if that meaning isn’t obvious. A lesser filmmaker would leave you feeling cheated by it. Peele, who never feels the need to spoon-feed his audience, simply leaves you breathless, content to remember the shot, confident that whatever significance you might attach to it is exactly what he intended.