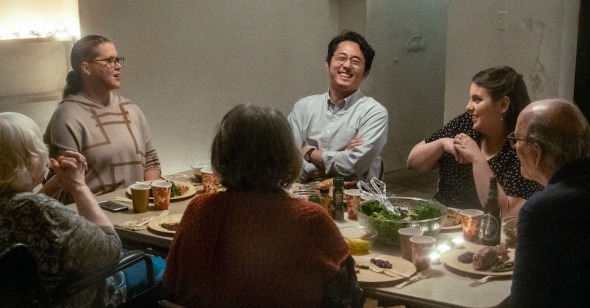 The Family That Prays Together
By Matthew Eng

Don’t be deceived by the stark, scoff-inviting pretension of the title. There’s nothing lofty about Stephen Karam’s adaptation of his Tony-winning, Pulitzer-nominated one-act play The Humans, about a working-class Scranton family observing a bittersweet New York Thanksgiving in the Chinatown duplex of its youngest member. What distinguished Karam’s play—and what stands out in the most affecting segments of this, his directorial debut—is its uncommon modesty. Karam abstains from the juicy dinner table fisticuffs and finger-pointing feuds of something like August: Osage County (2013), Tracy Letts’s much-ballyhooed drama about an extended Oklahoma clan engorged with soap-operatic perversions. Karam, conversely, is more invested here in detecting and dilating the unarticulated fears and insecurities of the white, middle-class American family, whose happiness (or lack thereof) is continually undergirded by money (or lack thereof). The overlapping bonds that come into focus in The Humans are defined as much by gentle, deep-seated affection as by private griefs, infuriating fallibilities, and past brushes with the void around whose edge so many of us, save for the most privileged, are perpetually circling.

Julie (Beanie Feldstein), a struggling composer in her twenties, is the harried hostess of this Thanksgiving dinner. Her dad, Erik (Richard Jenkins), a longtime private school janitor; mom Deirdre (Jayne Houdyshell), an office manager; older sister, Aimee (Amy Schumer), an attorney based in Philadelphia; and paternal grandmother, Momo (June Squibb), are Julie’s guests at the leaking, beat-up apartment she has just moved into with her boyfriend, Richard (Steven Yeun), an aspiring social worker who has undertaken the majority of the cooking. Until its final half hour, little of major dramatic significance occurs in The Humans. There are plenty of polite and appalled reactions to Julie and Richard’s fixer-upper (stunningly mounted on a Brooklyn soundstage with cracked, detailed verisimilitude) and the thumping, ceaseless cacophony that surrounds it on all sides, emanating from noisy neighbors and a nearby trash compactor. There are shared recollections that still fondly amuse, like resort vacations and ribald Irish prayers, and those that continue to haunt, like Erik and Aimee’s close call with death on September 11th. Personal trials come into focus: Momo has nearly completed her descent into the fog of dementia while the particularly luckless Aimee is being given the boot from her law firm, contending with a critical medical setback, and reeling from a breakup with a longtime girlfriend she still loves. Meanwhile, the deeply religious Deirdre downs wine and grimaces at the condescension of two agnostic daughters who never respond to the articles she emails them. And Erik, when not volunteering to caulk the apartment or advising the unemployed Julie and heartbroken Aimee, gazes out the fogged windowpanes that look onto an enclosed back alley with a hangdog stare.

It is clear that Karam has made real efforts to render his play in the language of cinema, enlisting expert cinematographer Lol Crawley, who crafted distinct visual styles for films as disparate as Lance Hammer’s Ballast (2008), Andrew Haigh’s 45 Years (2015), and Brady Corbett’s Vox Lux (2018). Crawley’s canny, unsettling effects are indebted to the conventions of horror: murky rooms, shadowy walls, creaking doors, and trick mirrors proliferate. The camera clings to Karam’s actors like they’re each a final girl trapped in a windowless basement, sitting centimeters away from Schumer’s face while Aimee scrolls through her ex’s Instagram. Similarly, Jenkins is shot from behind in close-up so frequently that you’d have to stand behind him at Starbucks to become better acquainted with the back of his head. Crawley shows a penchant here for puzzling close-ups of festive foods, rusted pipes, beveled reflections, mildew stains, and peeling paint that border on the florid. In tandem with the film’s sound design, which makes the mysterious thuds of an upstairs tenant sound like operations on a military base, this camerawork is at times over-deliberate, too intent on aestheticizing the cramped quarters when a more straightforward approach might have benefited the narrative. When Erik divulges the film’s biggest revelation to his daughters, a confession that marks the death of this family’s illusion of unified stability, Crawley circles them from a distance rather than lingering on their faces.

The film’s most evocative moments are its long takes, when the camera pushes in on Jenkins as he recounts a disturbing, recurring dream about a woman whose face is all skin or on Houdyshell as she cycles through a dozen different moods, commanding our attention with the dread that fluctuates now and again across her face. Like the majority of contemporary stage-to-screen adaptations, The Humans depends on the contributions and chemistry of its actors. Houdyshell, reprising the role she originated and for which she earned a Tony, is quietly extraordinary, scaling back her already understated stage performance and carefully tailoring and pitching it with more lived-in intimacy to the eye of the camera; she makes Deirdre into an island of solitary anguish and stubborn, age-honed certainty. (It is so refreshing to see Houdyshell, a treasure of the New York stage, permitted an opportunity that otherwise might have found its way to Margo Martindale or Ann Dowd, Hollywood’s go-to battle axes.)

Jenkins is as moving and believably tormented as ever, but there’s little that’s new in yet another of his bleak performances as a creased, aging everyman. (I so wish that original player Reed Birney, an infinitely reliable if lesser-known character actor, had been given the chance to rework his Tony-winning stage triumph, a master class in delicate restraint.) Feldstein, whose inescapability in the years since Lady Bird (2017) is threatening to expose a somewhat limited range, approaches her character with a sarcastic bite that also feels overfamiliar—and which only makes Yeun’s earnest, sensitive dreamboat more heavenly by contrast. Conversely, Schumer may arguably be the least experienced and versatile thespian of this bunch, but she lucidly and touchingly conveys Aimee’s hopelessness and her standup-honed spontaneity is invaluable to the film’s numerous group dialogues. The actress casually pushes certain scene partners off their stock rhythms, forcing them to stay alert and discover one another anew.

Karam’s ensemble ensures that his mood piece remains rooted in character, the tenor of their interactions cloaked in the strain and apprehension of things decisively left unsaid. The smaller gestures and admissions speak loudest in The Humans, like the most outwardly stable character’s acknowledgment of a not-so-distant history of instability or the kind, passing offer of companionship made in the final shot, which returns the work, quite impressively, to its stage roots. The home truths that stung and stirred on stage still sting and stir on camera and are worth pondering.

Differing from his source text, which kept all the characters—save for the outlying Momo—in constant, pinging rotation, Karam posits Erik as the visual and critical nucleus of his film, an astute choice notwithstanding the occasional predictability of Jenkins’s turn. Erik is a shaky vessel for many things: the unnatural stoicism that patriarchs assume is demanded of them, especially in extremity; the pushiness of the pious, churchgoing parent; the terror of those who labor towards a pension that can be ripped out from underneath them at a moment’s notice. Amid such tailspins, family can just as often be a cross to bear as a consolation, illustrated by Erik’s futile, relentless endeavors to guide and reassure his doleful daughters through their respective crises, naive attempts to resolve all that is irresolvable within a cruel and volatile existence. These aren’t novel themes per se, but they are so seldom centralized in mainstream cinema with the consideration Karam affords them in The Humans.

I doubt there’s a large audience eagerly awaiting these sorts of everyday insights, tucked into a chamber piece about an unexceptional, rundown Pennsylvania family in limbo, certainly not in a moviegoing climate in which the amount of willing ticket-buyers for any film not based on intellectual property or starring Ryan Reynolds is ever-dwindling. (And then there’s the case of the toxic super-producer Scott Rudin, whose name has been stripped from The Humans, but whose involvement with the project on stage and screen has seemingly silenced any celebration surrounding the film’s release.) Whatever its overreaches and miscalculations, The Humans is an imperfect symbol of the type of attentive, clear-eyed, midrange American production that deserves a surer foothold within American movies. It aims to impart emotional truths about real, vulnerable people residing in a soul-crushing world we can immediately recognize as our own, whose only safety net are the family members who can barely steady and secure themselves, who refuse—for better, for worse—to let us go it alone.