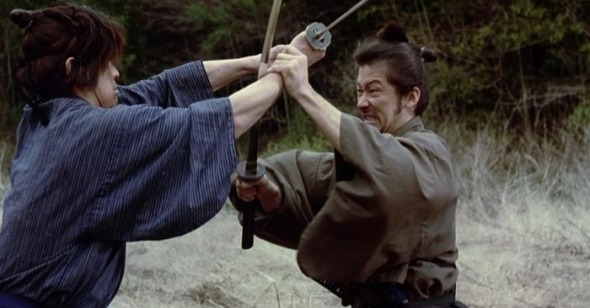 Hitting the Beat
by Andrew Tracy

For all the chatter about Quentin Tarantino‚Äôs cultural sampling and border jumping between high and low art, his (white) elephantine opus acts more like a colonizer, staking out a self-contained retro-vacuum where our hunger for art in American movies can thrive on faith divorced from accomplishment. Tarantino‚Äôs genre mix-and-matching and quotation-marked borrowings aren‚Äôt so much homage to his forebears as a mammoth act of self-aggrandizement. To compare the airtight world of the Kill Bill films with the generosity and openness of Jarmusch‚Äôs Ghost Dog‚ÄĒa film whose culture-blurring project shines all the brighter in the enveloping murk of Tarantino‚Äôs juggernaut‚ÄĒis to see reverence refracted into narcissism, the apprentice‚Äôs smug imprimatur taking precedence over the considerably less pretentious teachings of his masters.

Of course, filmmaking being an art particularly conducive to narcissism, our critical taste often boils down to which kind of narcissist we prefer. Takeshi Kitano is certainly no stranger to self-regard‚ÄĒ‚ÄúI am the master!‚ÄĚ he crowed when Fireworks took the Golden Lion at Venice‚ÄĒor pretension, for that matter. But his redux of Shintaro Katsu‚Äôs venerable blind swordsman sails serenely into a higher realm of the disreputable: it‚Äôs an exquisitely executed trifle, exploiting Kitano‚Äôs personal appeal and indulging his extravagances while honouring that from whence it came. Where Tarantino plays the bully with his influences, appropriating them to build his ungainly monument to self-love, Kitano lets genre conventions fall into his orbit, molds them to his rhythms, searches out tangents and outright departures from the material as his whims determine. Though considerably more the egotist and self-declaring artist than Jarmusch, Kitano in Zatoichi elicits a similar openness, a similar sense of curious, exploratory freedom. ‚ÄúKitano has no impulse to build on past successes or to go any significant distance towards meeting audience expectations,‚ÄĚ notes Tony Rayns in Sight & Sound . ‚ÄúEach film is a challenge he sets himself, the working-out of a conundrum or speculation, and his primary concern is that his directorial skills and judgment be equal to meeting the challenge.‚ÄĚ While Tarantino tries to turn his genre-exhuming into an epoch-making ball-buster, Kitano simply continues to tread his own eccentric path. As the man himself says (through the worshipful third person) to Cinema Scope , ‚ÄúIsn‚Äôt doing a period piece that has been filmed 25 times before the least predictable thing Takeshi Kitano could do?‚ÄĚ

Kitano should know better than to knock predictability, however. His persona as performer, in the guise of ‚ÄúBeat‚ÄĚ Takeshi, is virtually built upon it. In his character-defining moment in Fireworks, Kitano planted a pair of chopsticks into the eye of an offending yakuza. Since then, tracing backwards and forwards through Violent Cop, Boiling Point, Sonatine, and Brother, we wait for that calm explosion, the expectedly unexpected moment of violence which punctuates the rigorous ordering of the films. Revamping Katsu‚Äôs deadly yet troubled swordsman, Kitano has taken his own legend to its zenith: with blond hair, blue kimono and red cane almost comically highlighting his iconic status, Kitano‚Äôs Zatoichi is all outer reaction, no inner turmoil, an infallible automaton gliding through the rigmarole of the ritualized plot.

Unlike its stolid (if handsomely mounted) antecedents, however, this Zatoichi does not seek to canonize the ritual. Rather, it takes it as a point of constant departure and return, a trunk from which to ceaselessly branch out. Kitano by no means denies us the comedy of expectation inherent in the blind swordsman‚Äôs every appearance: swords flash, limbs fly, blood sprays with pleasing regularity. Yet Zatoichi himself often seems to take a back seat to other streams coursing through the film, digressions which oddly take on greater weight than the main current. Following the tone-setting slicing and dicing which opens the film‚ÄĒcomplete with a trademark deadpan Kitano joke involving an overeager combatant‚ÄĒKitano cuts to a group of farmers digging in their field, the rhythm of their strikes establishing a counterpoint to Keiichi Suzuki‚Äôs music while underscoring Zatoichi‚Äôs shuffle as he passes a procession of workers leaving the village. The various fetishizations (of iconography, persona, and violence) which Kitano so knowingly deploys in his first sequence here dissolves into sheer tone and cadence, an uncannily precise matching of sounds and images for no reason other than their inherent compatibility. It‚Äôs a little precious, certainly, but no less pleasurable for it‚ÄĒand besides, it pays off later on in another great little gag during a celebration in a rainstorm.

Such is basically the balance Kitano strikes throughout the whole film: loose and discursive, with absolute precision. The necessities of plot‚ÄĒthe alliance of two local gangs, a vengeful pair of geishas, a deadly ronin seeking money to cure his ailing wife‚ÄĒdon‚Äôt so much dominate the proceedings as slip their way into Kitano‚Äôs detours. Kitano employs these familiarities both to keep faith with the tradition he is honouring‚ÄĒhe took on this film in the first place out of a sense of obligation to Katsu‚Äôs partner Chieko Saito, who had mentored Kitano during his days as a standup comic‚ÄĒand to serve as the material for a series of wholly self-contained sequences. In one striking passage, a heavy rain halts the action, and the characters simply sit, look and listen to the pelting of the raindrops, visual and aural sensations calling up scattered, separate memories: a brutal (and beautiful) battle in a downpour, a hard youth of prostitution on the road, a painful humiliation dealt out by a masterful and arrogant samurai. Kitano does not seek to fit these separate narratives into the through-line of a plot, but rather lets them course around his own strong central presence, their individual rhythms sometimes moving in pace with each other, sometimes breaking away.

If this fluid, somewhat haphazard construction occasionally leads Kitano too deep into his indulgences‚ÄĒchiefly visual preciousness, sentimentality, and downright cuteness‚ÄĒit also allows him to crack open his masterful sense of cinematic timing and study its workings, tinker with it, luxuriate in tempo removed from any needs of narrative. Where Dolls took this approach down the ornately poised art-house path, the lighter-spirited Zatoichi exults in sheer cinematic exhilaration. As the film draws to a close and our hero goes about disposing of his remaining foes, Kitano shifts his sights to a village celebration, where all the film‚Äôs (still-surviving) characters join in a splendidly choreographed mass tap-dance number. Thoroughly irrelevant in narrative terms, and almost heretical in distracting from the sword-swinging denouement, this marvelous sequence is the peak of Kitano‚Äôs determinedly modest triumph, its grace and joy reflecting its creator‚Äôs affectionate reverence towards his predecessor while its stylistic exuberance and bizarrely personal tics place it squarely within Kitano‚Äôs idiosyncratic vision. By its very inconsequentiality, Zatoichi acts as deterrent to Tarantino‚Äôs steamroller tactics, dissolving its maker‚Äôs self-importance rather than enshrining it. If the cinema is doomed to rule by narcissists, we can at least favor those whose innate grasp of the rhythms and harmonies of filmmaking allow entry into something larger, freer, richer than their own vanity.