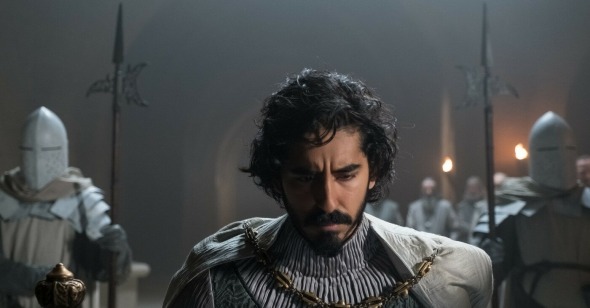 A Hero Comes Along
By Nicholas Russell

There has always been the possibility for rot in the court of Camelot. At the heart of the magic and lore of Arthurian fantasy lies a monarchy built on conquest, one that, depending on the telling, becomes legend by the sheer magnitude of its good deeds and heroic feats or, alternatively, uses legend as a shroud to hide horrible acts of war and greed. Kazuo Ishiguro’s 2015 novel The Buried Giant investigates the latter. A supernatural, memory-obliterating mist pervades ancient Britain, days and years disappearing from people’s lives. King Arthur’s storied legacy prevails, but not the violent methods he used to attain it, which is exactly the mist’s purpose.

This tension, between the moral and the actual, is what storytelling is, and The Buried Giant asserts that the gap between the two can be weaponized to uphold blood-stained authority. After all, the tales of King Arthur and his Knights of the Round Table, along with the adventures and battles of Merlin and Morgana, make up a kind of alternate, Christian history of Britain. The religious or magical aspects of various adaptations tend to be elided depending on what a given riff is striving for. Guy Ritchie’s messy but worthwhile King Arthur: The Legend of the Sword presents a swashbuckling, fantastical adventure, while also reintegrating the Anglo-Saxon nationalist origins of the story. Antoine Fuqua’s dreary King Arthur goes for a misguided historical accuracy, turning Arthur into a Roman soldier and completely removing the supernatural. Obviously, there’s room for both versions and neither represent extreme ends of the genre; the canon includes the likes of Monty Python and the Holy Grail, Camelot, Excalibur, Army of Darkness, and The Sword in the Stone.

Generally there is a fableist quality to these interpretations, a feeling or explicit indication that what’s being shown is being retold. Rarely does this frame break, and rarer still are we ever encouraged to question the veracity of the account given. David Lowery’s The Green Knight invites authorial skepticism, searching through hundreds of years of English folklore and literature to arrive at something altogether more slippery yet truthful about how narrative bends to serve its master. Those familiar with the original Middle English poem, perhaps from an English course in college, will remember that Sir Gawain and the Green Knight is a chivalrous romance rife with Christian symbolism. Lowery retains this, but the purity of Gawain, played by Dev Patel, and the unimpeachable greatness of Camelot is absent. Patel’s Gawain is still King Arthur’s nephew, but he is not yet a knight. Instead, he’s something of a layabout, shirking courtly decorum in favor of drinking and consorting with his lower-class girlfriend Essel (Alicia Vikander, in one of two roles).

The world around Gawain has a drab realism to it, mud aplenty and barns burning, but it is also a place where magic is mundane enough to exist without much attention. Gawain’s mother, here retconned as Morgana—traditionally Gawain’s aunt and Arthur’s half-sister—is a well-known witch, as are her daughters. Titans roam the countryside. Animals speak. Still, these aren’t whimsical flourishes. There is the implication that Britain has been ravaged by war and that magic is no cure-all. King Arthur and Queen Guinevere, played with striking vulnerability by Sean Harris and Kate Dickie respectively, are frail, aging monarchs whose glory days are far behind them. God’s good grace, enshrined in the pentagram of Arthur’s court (the number five is prominent in both the original poem and in Christianity, representing the five wounds of Jesus), seems to have come and gone. The battles have been won and Gawain exists in the aftermath, a young man who is content to keep a close proximity to his royal relatives while avoiding any true responsibilities.

This changes on Christmas Day, when a towering, silent figure interrupts the castle’s festivities. The Green Knight depicted here is a wonder of practical makeup effects, a tree-like giant whose worn face and ornate armor moves and breathes with the sound of splitting tree trunks. The Knight, played by Ralph Ineson, offers his famous proposition: strike him with a single blow today, meet his matching blow next year. In the poem, Gawain takes up this challenge with sprightly fervor and courage. Simon Armitage’s translation has him say, “I heave this axe, and whatever happens after/ in twelve months’ time I’ll be struck in return/ with any weapon you wish, and by you and you/ alone.” Patel’s Gawain is less certain, volunteering himself impulsively. We understand that he is not yet an honorable man and, following a tender conversation with his aunt and uncle, lacking any great story of himself to tell. This is underlined by the fact that he has no sword of his own with which to dispatch his opponent. Instead, Arthur lets his nephew borrow Excalibur, which Gawain uses hesitantly to cut off the Green Knight’s head.

This sequence offers a glimpse into not only the narrative liberties that Lowery takes but also the visual tools he employs to remind us that the world depicted onscreen is one where ancient, unseen forces lurk. Practical lighting effects gild characters’ internal struggles or supernatural abilities. When the Green Knight arrives, Arthur looks to an unnamed man at his table and a shaft of reddish light descends on him for a brief moment. I took this man to be Merlin, an implication that is subtly upheld later in the film, but the point really is that he has divined a sort of extrasensory knowledge, which he passes on to Arthur. All of this done with a single lighting trick, which is repeated in shades of green when Guinevere takes on the Green Knight’s gravelly voice as she reads his challenge aloud. For all the technical wizardry, computer-generated and practical, at play throughout the film, these details, present in the production design, in the soundtrack and audio design, in the costumes, in the editing, only emphasize the mythic nature of Gawain’s story. Lowery imparts what is so often missing from Arthurian adaptations, a sense of wonder that is both enticing and foreboding, the feeling that so much of what we are seeing is truly ancient and alive.

After Gawain beheads his opponent, the Green Knight stands with his severed head in his hands and reminds his challenger of the deal made. The year that follows passes in a flash and Gawain has done nothing to prepare himself for the journey he must take to find the Green Knight and complete their game. He drinks, he frets, he shrinks into the shadows. Only when Arthur urges him to greatness does Gawain reluctantly accept. As he goes out into the world, Lowery and Patel paint Gawain as both naive and capable, the possibilities for both present depending on how Gawain chooses to present himself to others. It’s unclear to the audience whether or not Gawain pursues glory because it’s unclear to Gawain himself. Part of this is Gawain’s sexual desire, which must be curbed if he is to attain the virtue a knight is expected to perform. The poem presents this as one of Gawain’s defining characteristics, his unflappable chivalry and goodness foils for those who would seek to corrupt him.

By contrast, Patel’s Gawain is easily tempted and impetuous in the face of danger. Marauders besiege him and would-be suitors seduce him with relative ease. Traditional heroism has no place in Lowery’s interpretation, and the film is all the better for it. The archetype that the literary Gawain represents is an ideal; Lowery chooses to offer a different perspective: what if Gawain does not become his legendary self through feats of strength, but through feats of deception? Throughout Gawain’s journey, in his encounters with the ghostly Saint Winifred, played by Erin Kellyman, and Joel Edgerton’s boisterous Lord, the expected arc is continually denied and not only are we invited to question Gawain as a hero, but as someone worthy of following at all.

From here, the narrative structure and events of The Green Knight are best left unspoiled. An impressionistic third-act sequence reorients the events that came before in a way that may irritate some audiences. By Lowery’s own admission, after the film’s original premiere at SXSW in 2020 was canceled due to COVID, he spent the next six months drastically recutting the entire film. The version he arrived at reiterates the marrow nature of what it means to craft your own legend. How that story unfolds and how the teller might choose to orient themselves within it reveals their desires and their failures. In Arthurian myth, virtue and honor are attributes held above all else. The Green Knight stays true to its origins by presenting a different kind of truth, by reworking key aspects of the myth for a new age, by showing the proscenium without writing off the trap door as trickery.