Stories from the Chestnut Woods 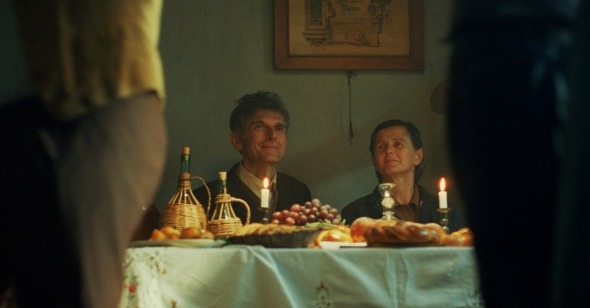 A Clearing
Vikram Murthi on Stories from the Chestnut Woods

Stories from the Chestnut Woods played at Museum of the Moving Image on July 23 as part of First Look 20/21.

The eponymous woods in Gregor Božič’s debut feature Stories from the Chestnut Woods takes on literal and metaphorical dimensions. The forest teems with the tree fruit, which falls to the ground after ripening and often lands in a cascading river, almost waiting for intrepid gatherers to rescue them before they float away. However, the woods are also a liminal space, a place whose inherent conditions cannot support growth or long-term viability, populated by people forced to call it home. The forest borders Italy and former Yugoslavia (now Slovenia), one of many unremembered lines dividing Western and Eastern Europe in the aftermath of World War II. Božič imbues the work with that specific political context through images of poverty and repressed political trauma, as well as actually filming on that land, but the setting easily transcends the historical milieu. It is a haunted, neglected place people are most likely to escape by dying instead of emigration.

Stories from the Chestnut Woods follows two people on opposite sides of the forest: Mario (Massimo De Francovich), an aging carpenter who specializes in building coffins, and Marta (Ivana Roscic), a young chestnut seller itching to abandon the woods for a better life elsewhere. Both are mired in states of grief; Mario for his estranged son, Germano, and his dying wife Dora (Giusi Merli), and Marta for her husband who disappeared after joining the army. They serendipitously find each other one day and commiserate over their shared circumstances. Stubborn and frequently hostile to his wife and friends, Mario tries to persuade Marta to stay in the area and build a life for herself there, but she calmly informs him that nothing is possible where they live. Eventually, Mario gives her the money to travel to Australia, perhaps out of misplaced guilt for not supporting his son on his own venture abroad.

Božič employs a broad “fairy tale” framework for this central narrative but casually subverts it every step of the way. It’s “told” via voiceover by Germano, but the character only inserts his presence at the beginning and the end of the story. Mario and Marta’s meeting takes up a relatively small portion of Stories from the Chestnut Woods with Božič filling in the gaps with other digressions, mainly Mario struggling to care for Dora in her final days and scenes of Marta’s solitary lifestyle—anecdotes shared between them or imagined visions from their respective psyches. There are fantastical elements in the film, mainly the presence of ghosts who play music when Dora and, later, Mario are near death, but they never intersect with Mario and Marta’s relationship. Božič eschews chronological storytelling for a circular, more elliptical structure in which scenes are presented as jumbled episodes flashing before the viewer’s eyes. It’s a fairy tale given the real-world improbability and quasi-magical implications of a stingy, curmudgeonly old man performing such a generous financial act, but Božič presents it more like a melancholic dream with bursts of fleeting cheer. It’s as if Béla Tarr told a whimsical bedtime story.

Stories from the Chestnut Woods’ restrained oneiric imagery and sound design, its strongest features, greatly contribute to its supernatural tone. Ferran Paredes Rubio’s 35mm photography has an eerily still quality, even when the camera gently pushes in to a body or pans across a space, like the mind’s eye during REM sleep. The sounds of whooshing winds and lapping streams are purposefully amplified so that the forest feels alive in ways the people residing there do not. In many ways, the singing ghosts register as a too-obvious fanciful gesture, a way to signal surrealism when the otherworldly already feels present in the environment. Chestnut trees themselves bear old-world properties and Božič infuses a haunted energy into the small, sparse rooms, as if the spaces themselves bear the scars of war and penury. Adding literal ghosts to this milieu feels almost unnecessary, even if Božič designs them to be affirming signs before someone transitions into the next life.

Božič exhibits so much confidence in his direction and his script’s structure that small betrayals like overexplaining when smaller motions are preferable, such as Marta literally describing their setting as “a forgotten place,” stick out like sore thumbs. He also has a penchant for weighing down moments with symbolic or allegorical heft that removes some of the mysticality in the work. Stories from the Chestnut Woods works best when these moments are presented in a roundabout fashion, like Mario’s visits to a gruff, uncooperative doctor (Tomi Janezic), who diagnoses everything as “flu, tuberculosis, [or] typhus” and prescribes the same treatment regardless of what ails the patient. “How come I know what you’re going to say, and you know what I’m going to say, too?” Mario asks. The doctor implies his job is not to heal those who live here but to shepherd them out of a bleak, unforgiving existence.

Liminality implies a departure point and a destination, but also a trap, of being stuck in between a harsh world and a more inviting one. Božič captures this state of being lonely and ensnared by one’s surroundings through patient, meditative camerawork. He lingers on Marta’s forlorn expression as she mourns her husband’s absence and walks alone through the woods. He stays with Mario as he marinates in regret for the way he treated his son and his wife before her illness. Regret and fear are two sides of the same coin, especially when one remains in an immovable rut. It’s what lends Mario’s gift to Marta its power. He’s offering her freedom from their shared disease. All he asks in return is a positive memory of him before he leaves their prison as well.