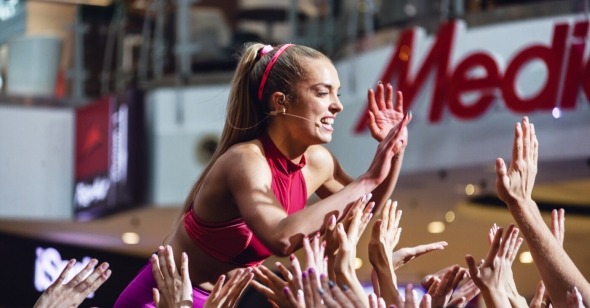 Get Me Disembodied
By Matthew Eng

‚ÄúI‚Äôm diving into your beautiful energy!‚ÄĚ actress Magdalena KoleŇõnik breathlessly screams to a pack of panting and perspiring women during a group workout in a Polish shopping center in the opening sequence of Sweat, the second film by Swedish writer-director Magnus von Horn. It‚Äôs a line that might trigger a snort or eye-roll, priming one for a stinging satire of an industry ripe for critique. KoleŇõnik‚Äôs petite, blonde Sylwia Zajac, a much-loved fitness guru and social media influencer is, after all the type of person who might earnestly say something like, ‚ÄúI‚Äôm diving into your beautiful energy!‚ÄĚ But von Horn is not working in the realm of satire, and he questions and carefully takes apart our knee-jerk impulse to laugh at or deride his extremely online protagonist over the course of this incisive and assumption-busting character study. In fact, von Horn dares to suggest that Sylwia is sincere in both her enthusiasm and her emotional, symbiotic connection to her fans and disciples. One of them, a middle-aged woman, hands Sylwia a homemade, floppy-eared rabbit hat during the mall-set prologue and tells her, through tears, that her routines have changed her life; there are tears brimming in Sylwia‚Äôs eyes as well.

The idea for the film came to von Horn while following an actual fitness celebrity on Instagram and wondering about her off-camera life, the part of her that goes undocumented in her dozens of daily posts. Like the IRL influencer who inspired von Horn, Sylwia has built a sizable empire by preaching the virtues of self-betterment through exercise to her online followers, landing magazine covers, branded partnerships, and morning show segments. However, all is not well behind her toned and bubbly facade. Transpiring over the course of a single weekend, Sweat submerges us in its heroine‚Äôs life as Sylwia contends with the attentions of a stalker, the inattention of her mother, and the viral fallout from a worrisome video posted on Instagram, in which the single Sylwia lachrymosely confesses her loneliness, uncertainty, and desire for a partner; this is a far cry from her usual content of motivational speeches and presentations of luxury goods sent to her by corporate sponsors, filmed with an LED ring light affixed to her iPhone.

As we quickly learn, there is virtually no one meaningful in Sylwia‚Äôs life beyond Jackson, her adorable terrier puppy, the only character in the film to whom she appears truly bound. She is immune to the charms and chiseled physique of her cocksure co-trainer Klaudiusz (Julian Swiezewski), who shamelessly flirts with her behind the scenes. Even more irksome is the older, portly stranger (Tomasz Orpinski) who Sylwia catches jerking off to her in a white car parked outside her apartment complex; after she smears his window with dog shit, he tags her in a disturbing video wherein he sobs through an apology.

Even as von Horn dabbles in dark material and strips away the deceptively smooth polish of the film‚Äôs opening movements, Sweat maintains a sly lightness of touch, its tricky tone, at once agile and melancholic, set early on by the performance of its star. With Michal Dymek‚Äôs fluid, unlocked camera fixed on her, the actress appears in nearly every shot and, in tandem with a filmmaker more interested in character and psychology than critique, delivers a performance of unflagging intensity that functions like a prism through which Sylwia‚Äôs inner state is reflected and refracted. KoleŇõnik plays Sylwia without condescension or irony, those distancing effects that usually bolster a performer‚Äôs self-involved need to distinguish herself from an easily dismissible character. Between the robust, effortful physicality of the film‚Äôs demanding exercise scenes and the gimlet-eyed glares and sphinx-like silences of Sylwia‚Äôs one-on-one interactions and at-home isolation, KoleŇõnik‚Äôs performance is fervently inhabited and remarkably devoid of sentiment.

Neither KoleŇõnik nor von Horn seek to demean Sylwia or her passion; they depict Sylwia as achieving something like serenity when working out and pushing herself beyond her threshold of pain, respecting her work by recognizing it, first and foremost, as work, as a form of labor that requires discipline and diligence. It is easy to envision how a subject like Sylwia might have been flayed by a pitiless American filmmaker like Alexander Payne or Todd Solondz, or, conversely, valorized as a wholly unproblematic paragon of female empowerment by Emerald Fennell or Olivia Wilde. (Given the utter paucity of Hollywood‚Äôs imagination these days, a Margot Robbie‚Äďfronted American remake feels all but inevitable.) Instead, Von Horn, a graduate of Poland‚Äôs prestigious ŇĀ√≥dŇļ Film School, embraces the ambiguity of his narrative incidents, exemplified in a queasy exchange in which Sylwia runs into a married former classmate (Dominika Biernat), who confides in her, unprompted, about a recent miscarriage from which she is still reeling. Is Sylwia‚Äôs subsequent decision to open up to this acquaintance about her own uncertainties a circuitous if genuine form of comfort‚ÄĒi.e., a celebrity reassuring a onetime peer, whom she might not even remember, that she, too, struggles‚ÄĒor just an unwitting act of narcissism?

Von Horn lets dialogues like these play out at a delicate and unhurried pace that allows his characters to reveal themselves and their frayed bonds to one another as they might in real life. In an extended chapter of palpable and subtly escalating tension, von Horn lingers on a birthday celebration for Sylwia‚Äôs middle-aged mother, Basia (Aleksandra Konieczna), and illustrates the iceberg-sized wedge that separates daughter from parent, one who seems good-humored and affectionate with everyone but Sylwia. The alienation of the adult daughter desperate for her mother‚Äôs attention is never verbalized but rather embedded in the characters‚Äô charged behavior, the ease with which Sylwia overshadows her mother at her own party, and the quick cruelty with which Basia undercuts her daughter and retrieves the attention of her guests, bringing out the spite that lies beneath Sylwia‚Äôs chipper aura with a single callous criticism. The cringe-inducing discomfort of these scenes is leavened by Sylwia‚Äôs clear craving for a form of love and support that her unbudging mother cannot afford her for reasons that reside offscreen.

The poignancy that springs from the cracks of these scenes‚ÄĒin doleful looks and unanswered appeals‚ÄĒmay come as a surprise to viewers expecting a fictional expos√© of the insular, homogenous world of a fitness influencer, as will the act of radical compassion that the film builds to, performed with little reason or awareness, almost as though occurring outside of body and mind, as if in a waking dream. This protracted sequence involves Sylwia‚Äôs stalker, who arouses more pity than panic, his subplot a litmus test of the protagonist‚Äôs empathy and the audience‚Äôs. (You might never guess that the character is based on Bj√∂rk‚Äôs stalker, Ricardo L√≥pez, who infamously mailed an acid bomb to the artist‚Äôs London residence and then filmed his own suicide by gunshot in 1996.) Ending on a one-two punch of cathartic unburdening and dogged resilience, Sweat may not have anything deeper or more damning to say about Sylwia‚Äôs world at large, but von Horn is confident in what he wants to convey about Sylwia‚Äôs personhood. His film takes place beneath the surface of a life, plumbing the cognitive dissonance felt by a woman whose soul exists separately from the body that has been branded, commodified, and consumed by thousands upon thousands.

This is also a film that has far more to say about the politics of consent and the psychological costs of a life spent in the pursuit of girlboss supremacy than recent attempts like Fennell‚Äôs Promising Young Woman and J Blakeson‚Äôs I Care a Lot. Those writer-directors attempted to spangle their resounding lack of insights with synthetic, candy-colored style and cheap narrative gimmicks that eventually locked their already opaque female protagonists‚ÄĒand the ill-equipped actresses tasked with embodying them‚ÄĒbehind an impenetrable wall of glass. (None of the punch-pulling provocations in Fennell‚Äôs confused film ring as true as the stomach-turning moment in Sweat when the expulsion of one sexual violation only leads to another, this time from a more familiar and trusted source, within the span of several seconds.) Unlike these farragoes, Sweat is able to achieve a rounded and nuanced portrait of its heroine by acknowledging all that is vain and superficial about her life, as well as all that is painfully common, shared with the base of fans that aspire to become Sylwia or just feel better about themselves and their bodies through her. Von Horn could have ridiculed Sylwia for finding comfort and reassurance in the positive, feed-friendly platitude, for needing the acceptance and adoration of the masses as a means of emotional propulsion, as a cure for loneliness. Acceptance and adoration may drive the quest for monstrous celebrity, but they‚Äôre also the very forces that allow plenty of us to look past the fears and anxieties that unnerve us without end, giving us the strength to face the world once again, for even a single day.