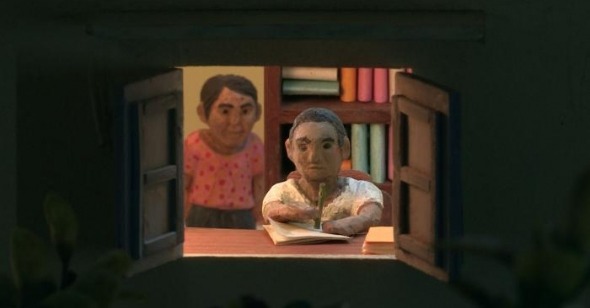 How Near, How Far
By Jordan Cronk

Within the documentary form, there have developed an array of permutations. Among other examples, the observational, participatory, and expository strains of nonfiction filmmaking work as effective tools for representing subjects in relatable terms. But what if no such iconographic record is possible or, at the very least, is of dubious political or personal origin? In such cases, a popular method of actualization has proven to be reenactment, a performative method that goes some way toward dramatizing the narrative while aligning it with more traditional cinematic storytelling modes. In a handful of cases‚Äîmost recently in Joshua Oppenheimer‚Äôs The Act of Killing, an unsettling account of Indonesian death squad leaders under the Suharto regime in the late 1960s‚Äîfilmmakers have been fortunate enough to have access to the actual subjects of their inquiry, thus employing these individuals to effectively restage the events in question. Cambodian director Rithy Panh utilized a similar technique in his 2003 film S-21: The Khmer Rouge Killing Machine, wherein the assailants of the title relive their gruesome crimes, often in the exact location where they originally transpired.

It begs to reason, then, that a similar approach could have been applied to Panh‚Äôs newest film, The Missing Picture‚Äîand indeed, variations on the re-creation concept have defined such subsequent endeavors as The Burnt Theater (2005) and Duch, Master of the Forges of Hell (2011). The Missing Picture, however, is an even more autobiographical project for Panh than his already disarmingly personal filmography suggests. Based on the director‚Äôs upbringing amidst the tumultuous late-1970s occupation of Phnom Penh by Pol Pot and his Khmer Rouge communist militia, the film is an intimately detailed account of one family‚Äôs struggle to survive the brutality of a movement whose reach extended well into every facet of Cambodian society. And while re-creation is the ostensible mode of presentation, the manner in which Panh visualizes this history is fresh and, as far as I‚Äôm aware, without major precedent. Between the standard integration of archival footage, Panh reconstructs an entire era of atrocity via handcrafted, painstakingly rendered clay figurines placed within mock dioramas of dense faux foliage. A documentary solely by association, The Missing Picture is rather more ineffable: a first-person political essay, an ancestral autoportrait, a cinematic scrapbook, and, most substantially, a vital historical rejoinder to an age of bygone trauma.

‚ÄúI seek my childhood like a lost picture. Or rather, it seeks me,‚Äù a tranquil voice, speaking on behalf of the director, intones on the film‚Äôs soundtrack. This French narration, written by Christophe Bataille and spoken by Randal Douc, represents but one of many intriguing degrees of distanciation. The hundreds of lifelike, one-of-a-kind figures are personally sculpted by Sarith Mang, whose hands are all that appear on screen, chiseling away at these malleable molds as Panh‚Äôs text is recited atop in poetic voiceover. Based in fact on the filmmaker‚Äôs own memoir, The Elimination, The Missing Picture proceeds as a series of highly detailed, unfolding tableaux, accumulating an acute resonance and an emotional undercurrent not typically associated with such an elemental narrative device. These miniature communities, despite their artifice, are nonetheless expressive, their sharp features grave reminders of a past lost but not forgotten. ‚ÄúA picture can be stolen. A thought cannot,‚Äù we‚Äôre reminded as Panh recounts the dispersion and eventual extinction of his family at the hands of the Khmer Rouge. It‚Äôs an overwhelming feeling, then, when one realizes that what we‚Äôre witnessing here is the creation of both a cultural and familial record that never was, alive only in those lucky enough to survive such an inhumane system.

Late in the film we see Panh examining rolls of damaged and decaying 16mm stock, presumably unearthed from Pol Pot‚Äôs propaganda archive and thus the source of The Missing Picture‚Äôs otherwise un-incriminating contextual footage. All but stricken from the annals of visual transcript, the Kampuchean occupation of Phnom Penh continues to reside in the realm of reminiscence, in danger of being marginalized or, worse yet, altogether forgotten. The Missing Picture is then not only singularly tangible but also historically crucial. ‚ÄúThere is no truth. There is only cinema. The revolution is cinema.‚Äù These words, slightly didactic on the page, are, on evidence of Panh‚Äôs considerable achievement, both ideologically and aesthetically engaged, the conviction of a man who believes in the immortal power of the moving image. ‚ÄúIt doesn‚Äôt take much. It just takes will . . . These pictures are not missing. They are inside me.‚Äù Panh‚Äôs memories, once strictly his own, are now the world‚Äôs to recollect and perhaps one day reconcile. Here is a man who has truly left his will on film.