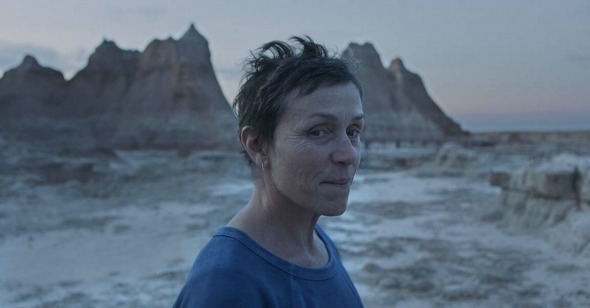 There’s a dwarfing cosmic beauty to Nomadland, Chloé Zhao’s elegiac tone poem about the itinerant lifestyle of the vagabond communities that roam the American heartland. This is Zhao’s third feature, following her 2015 debut Songs My Brother Taught Me and 2017’s acclaimed The Rider—though it’s the first to be headlined by a professional actor, two-time Oscar-winner Frances McDormand, who produced the film along with Zhao. It’s hard to imagine anyone else in the role of Fern (Hilary Swank is the closest that comes to mind), a scrappy, self-sufficient widow trying to forge a new life for herself after the death of her husband and the demise of their beloved industrial town.

We first meet Fern as she prepares to embark on this new, tentative chapter of her life, having just purchased a van that she’ll refurbish and call home. When her temporary gig at Amazon expires, Fern resigns herself to the idea of leaving in search of work and warm weather, at the gentle encouragement of her fellow mobile-dwelling friend and co-worker, Patty (Patricia Greer). She soon reunites with Patty on reserved Native American land in the Nevada desert, where she is warmly embraced and mentored on the basics of the nomadic lifestyle by the peripatetic society’s colorful band of earnest, kindhearted misfits. The nonprofessional actors populating the film are in fact real-life nomads playing fictionalized versions of themselves, a gambit that pays off in spades.

From there, we follow Fern as she navigates the open road, in search of seasonal jobs, scenic beauty and a sense of community at every stop. Along the way, she twice crosses paths with a young hitchhiker and strikes up a meaningful conversation over a beer and cigarette; bids farewell to friends who depart for greener pastures; and sparks a kindred and lasting friendship with fellow drifter Dave (David Strathairn, the film’s only other professional actor), a decent man and gentle soul who may or may not abandon his cherished lifestyle and integrate back into conventional society after becoming a grandfather.

McDormand and Strathairn’s chemistry with their amateur costars elevates the social realist strengths and lived-in blue-collar naturalism that defined The Rider. McDormand grafts elements of the actor’s own no-nonsense, unpretentious and gruff yet cheeky everywoman personability onto the character of Fern. She brings a textured and stoic survivalist ethos to a woman constantly adapting to the precarity, lonesomeness, and liberation of this migratory way of life, who enjoys her solitude yet also seeks and indulges in connection, joy, and wide-eyed wonder. There’s an uncanny yet casual idiosyncratic honesty to McDormand’s internalized performance that speaks to the collective, silent suffering of the human condition; her unselfconscious, egoless familiarity poignantly reflects and refracts the film’s impressionistic depiction of nature’s humbling awe, as Fern breathes in the colossal, meditative landscape around her. The masterstrokes of McDormand’s work here are also felt in the way she cedes the floor to her nonprofessional costars, coaxing effortless and authentic performances from them through a palpable attentive empathy. In these moments, with McDormand as their captive audience, these less-experienced performers are given the breathing room to comfortably invite us into their worlds, and as they share their lived experiences, all perceived boundaries dissolve into an arresting, transcendent loveliness.

Amidst this stirring portrait of spiritual introspection runs a current of political malaise. It’s most starkly felt though the stories shared by each of these houseless folk, laying bare the moral deficiencies at the rotten core of our social safety net, in a consumerist society obsessed with profit over public welfare. The people of Nomadland are victims of late-stage capitalism like the rest of us, but they desire to reclaim and rewrite their stories—to break free from the shackles of destitution, despair and alienation—or as one memorable real-life nomad Bob Wells puts it, being a slave to “the tyranny of the dollar.” In their commitment to finding meaning, fulfillment and authentic bliss through the entropy and ecstasy of Mother Nature, they have gained more wealth than any material success can bring. They’re all guided by (and pursuing) a poetic existential purpose, in which achieving a sublime communion with nature is the most profound and enduring legacy one can leave behind. (Speaking to Fern, Swankie, a rather eccentric rover playing a loosely fictive version of herself, recalls a moment she shared with swallows on a river; “My life was complete, if I died in that moment I’d be fine.”)

As a story of American disaffection, dispossession, and disenfranchisement, of the realities of survival on meager means, the film doesn’t fool itself or its audience into believing we live in a post-material or post-dollar world. As observed through a lighter gifted to Fern, a set of cherished heirloom plates given to her by her father, or the organized community swap meets (whose bartering system is a nice rejection of currency transactions), possessions can hold enormous sentimental value. One of Nomadland’s understated achievements is its ability to maintain this tension between the tangible and the metaphysical, the quotidian and the divine. Zhao, who also edited the film, further drives this point home, often abruptly cutting from vistas of soaring epic wonder to shots of Fern fixing up her van, wiping excrement from a toilet, bussing tables, or any one of the menial odd-jobs she works to scrape together a living. Zhao’s observational focus on these physically laborious jobs complements the film’s tactile engagement with its natural world, in addition to its sensory one. These characters find value and pride in working with their bare hands; whether it’s scrubbing walls, washing rocks, repairing china or crocheting potholders (Fern tossing a salad with her bare hands is an especially nice touch, as is the shot of dreadlocked hitchhikers’ dusty bare feet)—and there’s a primitive intimacy to the way their bodies directly interact with their surroundings.

American history is defined by the illegitimate acquisition of land, as well as the blood, sweat, and toil that has gone into shaping it, to say nothing of the violence employed as a tool to secure it. This history serves as a parenthesis around Zhao’s pastoral reverence for the American West as a reflection of the American soul—Fern’s first introduction to this new life happens on reserved tribal ground, after all. Zhao conveys worlds in the way she subverts its blood-soaked history of exploitation by celebrating nature’s accessibility—that no matter how much money one has or where they hail from, anyone can enjoy its regenerative wonder. The film also presents a different, more cynical, conception of land. Whereas our roaming wanderers share, respect, and revere nature as a source of communal harmony, healing and solidarity, others, like the suburbanite neighbors of Fern’s sister, imagine it as something to be conquered and commodified in the form of real-estate. The limitless expanse of the Badlands stands in stark contrast to the molded and manicured lawns of the suburbs. Nomadland's breathtaking bucolic images also carry a lament, with the ecological anxiety of climate change hovering over everything like an anvil.

Nomadland shares much DNA with Andrea Arnold’s American Honey, another soaring vision of Americana (also made by a non-native born female filmmaker) that uses real locations, documentary techniques, and a blend of professional/nonprofessional actors to tell a vibrant, weltschmerz story of comradery among society’s marginalized, forgotten, and houseless. Yet unlike American Honey’s Star or Sandrine Bonnaire’s Mona in Agnes Varda’s Vagabond, we are given Fern’s backstory, and on more than one occasion, we see her reminisce over childhood album photos. These moments wistfully distill the film’s questions of where both Fern and we as viewers come from, what we want out of life, and where we’re headed. Fern’s memories provide a crucial center of gravity in a life of transience, where moving on is a form of emotional self-preservation (“what’s remembered, lives”). They are, in essence, her home.

Nomadland is an evanescent vision of the catharsis, abandon and enlightenment found in nature’s omniscient rapture. The film’s highways become an existential roadmap towards accepting our own mortality while reclaiming our agency. Fern’s soulful journey and search for home remind us of the power in opening ourselves to new experiences and savoring life’s simple pleasures while we’re still on this metaphysical—and geographic—plane. Set against Ludovico Einaudi’s swelling score, it’s a blues-tinged paean to departure, regret, and rebirth—or as one character croons, “Help me smile away the tears.”