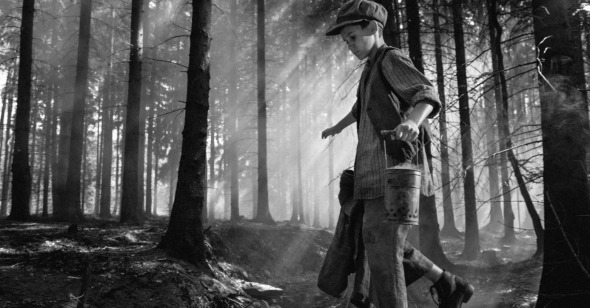 Perhaps the most notable polemic on the subject of aestheticizing cruelty in cinema is Jacques Rivette’s condemnation of “the tracking shot in Kapó.” In that shot, Emmanuelle Riva, playing a prisoner in a concentration camp, flings herself onto an electric fence. As the camera moves in, her lifeless arms dangle above her head while her face, just left of center and obscured slightly by a strand of barbed wire, looks off to the right, past the camera. For Rivette, this shot, with its deliberate positioning and aestheticization of Riva’s body, made director Gillo Pontecorvo “worthy of the most profound contempt.” Accordingly, “the tracking shot in Kapo” has since become a sort of shorthand for aesthetic exploitation, and the ethical questions Rivette raises have haunted Holocaust films as dissimilar as Schindler’s List and Son of Saul as well as movies, such as 12 Years a Slave and In Vanda’s Room, that tackle other troubling subject matter. Rivette’s declaration is of particular interest with regard to Czech director Václav Marhoul’s The Painted Bird, which, unlike Kapó, deals with the Holocaust allegorically rather than directly. But the cruelty Marhoul’s film depicts nevertheless contrasts sharply with the beauty of its depiction.

The Painted Bird contains carefully framed long shots and sharply lit close-ups, shots of varying durations, cranes and dollies, static shots and tracking shots. Despite the breadth of cinematographic technique, it is never flashy, and Marhoul makes careful use of point-of-view shots and off-screen space to obscure the most graphic events. The film is adapted from the 1965 debut novel of the same name by Polish-American novelist Jerzy Kosiński that was once considered a major work of Holocaust literature. The book marked the beginning of a briefly illustrious career, but accusations of plagiarism and ghostwriting eventually caught up with the author, and today he is arguably a footnote, his fame primarily a result of Hal Ashby’s adaptation of his follow-up novel, Being There. Questions of authorship aside, with much of Europe again teetering on the edge of fascism, there is no time like the present to revive The Painted Bird’s story of a young Jewish boy in an unspecified Slavic nation who falls into the care of, then escapes, a series of abusive adults, each of whose name corresponds to a chapter of the film.

Heavy as the film may be on the horrors of humankind, there is no “tracking shot in Kapó” in The Painted Bird; on the contrary, by respecting its audience, the film creates space to contemplate aesthetics and representation and indicates that depicting cruelty beautifully need not mean making cruelty beautiful.

Both positive and negative reviews emphasize The Painted Bird’s viciousness, and reports from the 2019 Venice Film Festival where it premiered tend to note the number of walkouts. It is easy to level accusations of nihilism against The Painted Bird’s parade of degeneracy, but context—as always—is key. Marhoul, for his part, responds to accusations of “depravity” by calling his film “truthful,” and one need only to consider his own life to see why. At 60 years old, Marhoul is only a generation removed from the Holocaust era. He was eight during the briefly successful—but ultimately crushed—Prague Spring, and he has since witnessed the dissolution of his country and now experiences daily the ongoing death of European liberalism. He worked with UNICEF in Rwandan refugee camps and has criticized Europe’s neglect of child refugees. Cruelty and division, as Marhoul’s life has taught him, are all around us, and his use of the Interslavic Language—whose origins trace to Slavic pan-nationalism in the 1800s—divorces the film and the depravity of its characters from any national or historical specificity, offering instead a vision of a world defined by abjection.

The Painted Bird begins with the unnamed boy at the story’s center huffing and puffing as he sprints through an untamed countryside, pet ferret in hands. He is eventually tackled by a slightly older boy, who rips the squawking ferret from his arms, douses it in a flammable liquid, and sets it ablaze. As punishing an opening as this may be—and as much as it sets the tone for what is to come—it is notably devoid of histrionics. The tormenters do not attack or even hurl epithets at the boy, and the boy himself does not cry out. The sudden quietness when the animal finally dies and the camera lingers on its carcass intimates that the film will walka fine line between horror and serenity. Just like that, the scene is over, and nothing more is made of the ferret. As the scene suggests, the boy’s life oscillates from unbearable to endurable and back again with little warning.

This seems to be the modus operandi of Marhoul’s adaptation. It depicts iniquity, but always leaves the audience at arm’s length. The black-and-white cinematography, the use of chapters, the muted acting, and the decision not to show the most violent acts on-screen help distance viewers from the material and encourage consideration, not merely reaction. Cruelty is integral rather than incidental, a subject and a thematic device rather than simply a characteristic. The Painted Bird is simultaneously extreme in what it depicts and delicate in its handling to ensure the viewer cannot help but consider how cruelty is represented.

The most alluring invitation to reflect arrives in the film’s eponymous moment, which occurs in its third section, “Lekh & Ludmila.” The trapper Lekh enlists the boy’s help in painting the wings of a sparrow white, and together they release it as a flock passes overhead. The sparrow recognizes its own and flies to join them, but the flock, no longer recognizing the painted bird, mauls it. Like much of the violence in the film, this action is largely implied. Lekh and the boy squint toward the sky, largely emotionless. (Hardly anything breaks the stoicism of the film’s characters; it is as if they have already been desensitized to life’s worst offerings.) We can see the flock tightening its formation, but it isn’t entirely clear what is happening until—as with the immolation of the ferret—the sound drops out and the bird falls lifelessly toward the ground. Here, Marhoul seems to be calling attention to his own filmmaking. The trapper’s staging of abjection—perhaps, but not indisputably, for the boy’s benefit—mirrors Marhoul’s, which is also presumably for some kind of benefit to the viewer. The question, for both the boy and the viewer, becomes “Why am I being shown this?”

We never learn why Lekh insists on showcasing such a spectacular display of cruel nature for the boy, but we can imagine any number of idioms—life isn’t fair, the world is wicked, difference kills—that would be true to the life experience of both characters and that even find affirmation in the chapter’s conclusion. Asking the same question of Marhoul’s staging of The Painted Bird for us, we could respond with more varied possibilities. Perhaps Marhoul hopes to shock us out of complacency; perhaps he wants to impress the gravity of the film’s historic events upon us; maybe he simply wants to torment us. As convincing or relevant as any one of these might be, however, they are no less clichéd than the boy’s own “life’s not fair.”

This is not a failing of the film; the question is of more interest than the answer. Indeed, this moment is charged with an irony so stark it borders on the absurd: The Painted Bird is a romantic title that suggests a beautiful image, but The Painted Bird is a deviant film, and its title comes from an ugly act. As this contradiction unfurls in front of our eyes it forces us to ask whether the very title of the film is an example of cruelty packaged as beauty. The film’s very title, then, reveals a considerable degree of self-awareness, and in doing so implicitly posesthe question of whether, and when, and how, to aestheticize abjection.

One’s conclusions about such irresolvable ethical and aesthetic conundrums inevitably say as much about oneself as the work at hand. Those looking for easy answers will likely be disappointed by The Painted Bird, but it offers to the viewer an opportunity to ponder these topics that is in some ways more valuable. After all, hardly a day goes by without the news alerting us to horrors greater than anything on the movie screen. It’s not challenging to envision a better world, but coping with the one we already have is imperative. There are no false promises and no contrivances in The Painted Bird, only a vision of the world and open questions about how best to approach it.