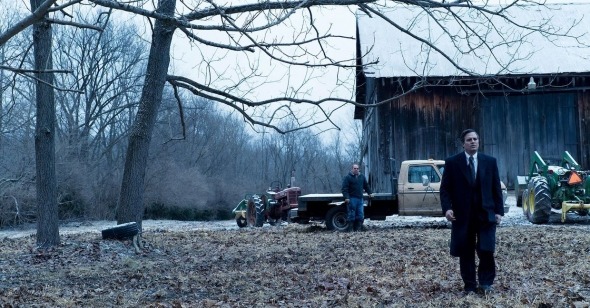 In the Blood Stream
By Caden Mark Gardner

Dark Waters is at once a legal thriller, an environmental disaster movie, and a dramatized historical document of a region, spanning decades, from the atomic age to present. On its face, such a project, set primarily in corporate offices, might seem an unlikely fit for Todd Haynes. The director has been on occasion criticized by some for primarily setting his films in the past, as though he has little to say about the present. But with Dark Waters, Haynes provides perhaps his greatest justification for continually returning to his period obsessions. This is a film about how the impact and legacy of post-World War II America and the trappings of American domesticity remain all around us in products, in our air, our land, and our water. Haynes delivers these inescapable facts with both dread and clarity. Dark Waters unsettlingly shows us the widespread sins and culpability that connect us to a past that cannot be undone.

The film is based on Nathaniel Rich’s 2016 New York Times piece “The Lawyer Who Became DuPont’s Worst Nightmare,” which profiles the Cincinnati attorney Robert Bilott (played here by Mark Ruffalo, who also produced the film). Bilott is a corporate attorney at the nationally recognized law firm Taft, Stettinius & Hollister LLP, but because of his family roots in Parkersburg, West Virginia, he takes on an unlikely client. Gruff cow farmer Wilbur Tennant (played by an outstanding Bill Camp, whose curtness often sees the character underestimated) has brought videos of his decimated cattle, nearly all of which have died under mysterious circumstances, after developing deficiencies and illnesses. Dressed head to toe in denim, Tennant is introduced not as a crazy eccentric, but a small-town farmer who, despite his imposing physicality, is dwarfed by the large and modern metropolis of Cincinnati, which is framed imposingly and in a way that casts suspicion at power by Haynes and his longtime cinematographer Edward Lachman. Tennant suspects his cows have been exposed to chemicals by Parkersburg’s largest employee, DuPont, a corporate giant in synthetic materials. Tennant’s farm is now a cow graveyard. Bilott gradually becomes obsessed with the case and only grows more emboldened when, at a chemical industry celebration, discussions of legal recourse have clearly rattled DuPont executive Phil Donnelly (Victor Garber) enough to publicly cuss out Bilott for what he is doing.

With his own colleagues at Taft Law skeptical and even derisively calling this case potential “ambulance chaser” plaintiff stuff, Bilott goes to work primarily alone in a room surrounded by stacks of DuPont-related materials and records. The records begin to reveal PFOA, or C8, as a dominant chemical used in the production of Teflon-based DuPont products. Surrounding these piles of dryly written corporate documents are warm, colorful, retro company advertisements of American housewives in kitchens with their nonstick pans. One can easily conjure images of previous Haynes heroines Mildred Pierce or Far from Heaven’s Cathy Whitaker from those ads, but the character who spiritually presides over Dark Waters is Safe’s enigmatic Carol White (Julianne Moore), a manifestation of discord and disruption in American domestic life; though in that film it clearly goes deeper than physical ailments, the negative impact and exposure from those chemicals and toxins that affected the affluent Carol causes her to flee the suburbs and seek solutions at a New Age retreat. Bilott soon begins to realize that DuPont employees, residents of Parkersburg, their offspring, and their livestock were exposed to these chemicals that made Teflon products and DuPont knew about it for decades. What Bilott pieces together is a frightening history and practice of American corporate greed and moral bankruptcy masked as post-WWII ingenuity and progress.

Ruffalo’s Bilott is enraged by this discovery and fears he has become a Cassandra to colleagues and family members. The script by Mario Correa and Matthew Carnahan is for the most part precise in where it seeks to land its bullet points and emotional cruxes, and Haynes brings urgency and weariness to every detail and successive year in this timeline. What Bilott has discovered is stated in a monologue on the history of Teflon that he tells to his pregnant wife, Sarah (Anne Hathaway); it’s one of the best scenes in Haynes’s career, striking with a righteous fury and sad, pained revelation as images of the real people, the factories, and mass-produced DuPont products are intercut with Bilott’s explanation for why he needs to stay on this case. Rather than present a movie star screaming from his soapbox, the scene, with Bilott sitting down at his kitchen table, radiates a sense of futility. There is that moment in Haynes’s 1991 film Poison when during the Jean Genet–inspired “Homo” section a text appears over a wedding between gay prisoners, “A child is born and he is given a name. Suddenly, he can see himself. He recognizes his position in the world. For many, this experience, like that of being born, is one of horror.” Bilott has begun to truly see the world around him; full of danger, the powerful interests that created those dangers, and the people who defend those interests that in turn made those interests’ practices virtually untouchable by litigation and oversight. The Teflon monologue is unshakeable, casting a pall over the remainder of the film, clouding the proceedings, even as small victories emerge for Bilott and his growing list of clients.

Haynes broke through as part of the New Queer Cinema movement and before that was an activist for ACT UP during the AIDS crisis. Given his personal history with making art that meditated on disease and social catastrophe, he is well prepared to take on a film about the human cost of government neglect and corporate greed. Consider how Wilbur Tennant gets made a pariah by the local media for wanting to uncover the truth, and recall the sensational and demonizing news coverage that stigmatized gay men in the eighties and nineties. A film like Dark Waters requires a filmmaker who is genuinely suspicious of institutions and who can sincerely, humanely depict the shared trauma and loss among the Parkersburg community, who have been exposed for so long to something elusive and unnameable.

Dark Waters may well be one of the first post-Trump American films that, without explicitly referencing him, addresses why certain regions of the country, such as Appalachia, turned against their own interests. Haynes presents a grim picture of how institutions, governments, and systems failed, mostly because these institutions let big business make or rewrite the rules, or move the goalposts, all while knowingly exposing working people and everyday consumers to poisons irreversibly altering our world. How can anyone continue to trust those in power, and why should one not trust the outsider instead? There could have been a more commercially palatable, Hollywood-friendly David versus Goliath version of this story, but Haynes has chosen instead to make a film that will get under people’s skin, one that avoids whitewashing bleak diagnoses on the environment and entrenched systems of power. Haynes’s political anger has never felt more palpable and direct. Ultimately, Dark Waters is exactly the type of film we should expect Todd Haynes to make: one fueled by the drive to do what must be done, however thankless.