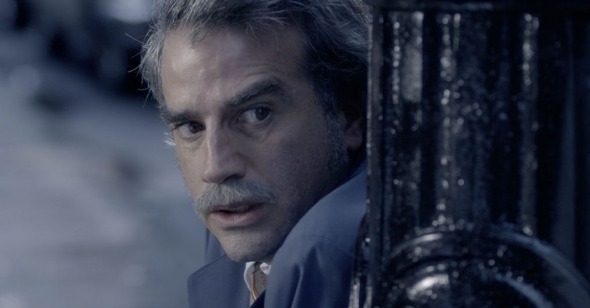 Answer Me
by Lawrence Garcia

“We moneybrokers are the root of all evil,” says Humberto Brause (Daniel Hendler), the central character of The Moneychanger, Uruguayan director Federico Veiroj’s fifth feature. Narrating from Montevideo circa 1975 over a view of the National Bank of Uruguay, where a fiscal scheme is already in motion, he then shuttles back to 1956 to tell of his apprenticeship to an accomplished moneychanger named Sr. Schweinsteiger (Luis Machín). The template of the criminal confessional is by now familiar to audiences the world over—though its place here speaks to a rich cinematic legacy as much as the project’s source novel, Juan Enrique Gruber’s 1979 Así habló la cambista, whose title underlines its “as told by” aspect. As the film traces Humberto’s decades-spanning dealings, and especially his tenuous marriage to Gudrun (Dolores Fonzi), Schweinsteiger’s daughter, Veiroj’s deviations from this established framework will constitute the film’s dominant tension.

No heroic Siegfried figure, Humberto is a feckless opportunist. And so his voiceover, which persists throughout the runtime, inevitably recalls the mobsters of Martin Scorsese, whose The Wolf of Wall Street Veiroj has cited as a conscious model for The Moneychanger. But apart from superficial stylistic rhymes, the comparison seems a bit misdirected. Scorsese’s tendency to amplify his scripts’ dramatic movements is rather opposed to Veiroj’s habit of defusing or subverting Humberto’s criminal machinations—neither the manic intensity of Goodfellas, nor the exhaustive procedural focus of Casino have much place here. There’s humor aplenty, mainly conceived around Humberto’s pathetic befuddlement, but Veiroj doesn’t push for the scabrous, pitch-black highs of, say, Wolf’s justly famed Quaaludes scene; he frequently withholds not just the vicarious pleasures of Humberto’s success but also the full measure of his humiliation. Not long after showing Humberto and Gudrun’s first date—a wistful, lushly colored passage set to “Estudio Arpegiado” by Uruguayan composer Eduardo Fabini—we see Humberto get in contact with the corrupt politicians that Schweinsteiger has thus far refused to deal with. But no sooner have these potent particulars been established than Veiroj skips to their abrupt dissolution, following a personal disaster (Humberto telling a pregnant Gudrun of his extramarital affair) with a professional one (a breaking corruption scandal in which he is implicated).

Given that The Moneychanger is an adaptation—notably Veiroj’s first, cowritten with regular cinematographer Arauco Hernández Holz, and Martín Mauregui—such canny compressions are to be expected. But they also help to clarify Veiroj’s core interest in the Brauses’ marriage. Following his conviction for political racketeering, Humberto resolves that his wife and two children “will want for nothing,” while Gudrun, for her part, treats his three-year sentence as a kind of business trip—a minor, but unavoidable inconvenience. The film reshapes accordingly. After a single scene in a prison courtyard, we see Humberto beneath a darkening, pink-violet sky, making his way home, where he is greeted by Gudrun telling him only that he’s late for dinner; in that moment, no force of will seems able to make her acknowledge his protracted absence.

A few perfunctory interludes notwithstanding, The Moneychanger isn’t fundamentally interested playing up the story’s crime caper aspects. Following Humberto’s swift return to his illicit trade, he gets a massive account from a pair of Argentineans. But even more so than the procedural machinations that this sets into motion, the emphasis is on the Buenos Aires shopping spree with Gudrun afforded by it. Like Belmonte (2018) before it, which centered on a divorced, middle-aged painter’s artistic paralysis, The Moneychanger more often resembles a tender portrait of a man’s familial crisis. Whereas that film’s eponymous protagonist was an actual artist, however, Humberto merely postures as one, highlighting the tensions between music and commerce that recur throughout the film. “I’m a creator,” he says, likening himself to Beethoven and Bach during the film’s most conspicuous formal flourish: an aerial shot that starts on Hendler reclined on a yacht in a kind of Dionysian daze, his wife and children sitting attentively nearby, and then gradually pulls back to reveal the boat adrift in a vast, threatening sea. (The shot’s physical movement and sense of cosmic portent recalls no less than the ending of Tarkovsky’s 1972 Solaris.) As if in response to his hubris, the scene segues into Humberto suffering a stress-related heart attack.

Just as Humberto finds himself increasingly enmeshed in a matrix of shady accounts and questionable personages, The Moneychanger is impossible to fully decouple from its allegorical implications—particularly regarding the legacy of dependency between Uruguay and its neighboring giants, Brazil and Argentina. In this regard, it plays as a kindred work to Argentinean director Benjamín Naishtat’s recent Rojo (2018), which likewise viewed the ills of its contemporaneous Latin American milieu through the lens of genre—in that case a bloody, noirish tale of disappearance—and whose Dirty War context directly ripples through to the events of The Moneychanger. Presumably impelled by violent upheaval, a man known only as “Mr. Harry” comes to collect the aforementioned Argentineans’ money and threatens to kill Humberto otherwise—a turn of events that precipitates yet another heart attack. But amidst this development, which looks to be the fulcrum about which the film’s final act will turn, Veiroj racks focus to Gudrun once more. More intriguing than the way Harry is eventually dispatched is her behavior in all this, which might be reckoned merely as self-preservation, but is difficult to fully assimilate in that assessment. Gudrun’s anger when she suspects Humberto of a further infidelity, for instance, which leads her to try and literally fuck him to death in a hospital room (by stressing his weak heart), seems all out of proportion to the dispassionate pragmatism she’s demonstrated thus far. It comes to feel like a caprice, an unknowable mystery, a difficulty of human behavior that in the end resists both Humberto’s presumed understanding of his wife and the interpretive frameworks that a viewer might provide.

Veiroj has compared the moral dimension of The Moneychanger to that of American film noir, and though his finely tuned aesthetic—particularly his talents as a colorist—might not resemble the hardboiled underworlds of James N. Cain, the film nonetheless brought to mind the Coen brothers’ oft-misunderstood, noir-pastiche masterpiece The Man Who Wasn’t There (2001). Granted, the two films share little stylistic similarity—the Coens would never work against the grain of the genre material in the way that Veiroj does here. But both conceal a tragically romantic core, observing two very different men yearning for a fulfillment that they are incapable reaching, or, inarticulate and artless as they are, even knowing what it is that they’re missing. In conforming more closely to classical genre signifiers, the Coens do go deeper than Veiroj, whose recalibrations of dramatic expectation feel, for once, somewhat toilsome.

Nonetheless, the mystery of the film’s central relationship lingers with an existential heft. “Do you love me?” Humberto asks Gudrun towards the end, in a moment of rare directness, the words spoken in a way that makes you wonder if he’s ever said them before. “Don’t ask stupid questions, Humberto,” Gudrun responds. As the camera floats away to the now-familiar keys of “Estudio Arpegiado,” Humberto sits perplexedly, trapped in a kind of Heisenbergian uncertainty. This irresolute ending pushes The Moneychanger beyond the usual tenor of regret trafficked in by many a mobster picture. Here, one senses the plaintive, eerie echo of an unanswered question.