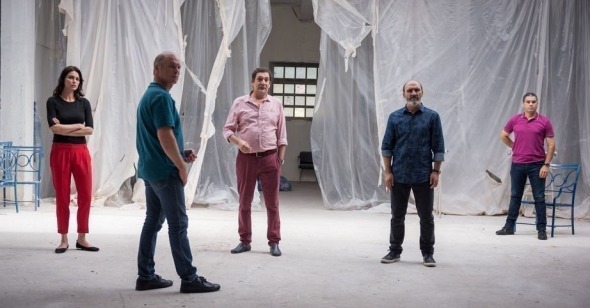 Blow by Blow
By Lawrence Garcia

The filmography of Romanian director Corneliu Porumboiu may well be defined by three points of interest: bureaucracy, language, and football. His 2009 film Police, Adjective‚Äîa largely uneventful, and thus likely accurate portrayal of procedural police work‚Äîexisted at the locus of all three, and from its title alone drew parallels between codified state laws and rules of grammar/speech in the context of a post-Ceau»ôescu Romania. (Football talk occupies a brief, complementary aside.) A drily humorous, conceptually dense piece of work, it remains, even now, the baseline against which his later films can most appropriately be measured.

The Whistlers, Porumboiu‚Äôs sixth feature, finds the director returning to both the realm of police work and, after a fashion, the subject of language. Vlad Ivanov stars as Cristi, a laconic, middle-aged Bucharest police officer introduced ferrying his way to one of the Canary Islands. No mere vacationer, he is there to learn El Silbo Gomera, the whistling language of the Guanches, the tribe native to the region. He has been instructed to do so by a Spanish mob boss named Paco (AgustiÃÅ Villaronga), the idea being that it can be used to bypass modern surveillance technology, as well as basic comprehension. (‚ÄúIf the police hear the language, they will think the birds are singing,‚Äù explains one of his handlers.) Back in Romania, where he is enmeshed in a web of conflicting allegiances, Cristi is to use the ancient language to help extricate a criminal contact from police custody.

The basic premise trades in the kind of casual absurdism that‚Äôs by now expected of Porumboiu. More surprising is the fact that The Whistlers plays much like a standard policier‚Äîa relatively by-the-book offering from a director who has distinguished himself by a willingness to throw out the manual. Eschewing the deliberate, duration-based tedium of Police, Adjective, Porumboiu here offers all the genre pleasures that even the most casual moviegoer might expect: a climactic shootout, double- and triple-crosses aplenty, and not one but two femmes fatale (one of them knowingly named Gilda). If his previous films were marked by their divergences from convention, The Whistlers shocks in its ostensible conformity‚Äîor that‚Äôs the idea, at least.

Given the vagaries of contemporary (art) film production, the fact that The Whistlers arrives precisely ten years after Police, Adjective is likely coincidence; that it incorporates details of that film‚Äôs main police case into its diegesis‚Äîimplying that two of its major characters are the same figures a decade on‚Äîis not. Cristi‚Äôs main link to the criminal mob is a beady-eyed, Bond villain‚Äìlike businessman named Zsolt (Sabin Tambrea), whose arrest as a teen for dealing weed he oversaw years before as the police chief in a backwater suburb. As told in a routine briefing, the details of Zsolt‚Äôs juvenile delinquency correspond exactly to information presented in Police, Adjective‚Äîthough here we also find out that he eventually snitched on his brother, who later committed suicide in prison. The prime fear expressed in that film‚Äîthe possibility of ruining a kid‚Äôs life over an innocuous crime‚Äîhas evidently come to pass.

Porumboiu is not attempting a gambit along the lines of, say, Richard Linklater‚Äôs Before trilogy. The callback here conjures up no intimate familiarity or twinge of somber regret, and serves mainly to foreground the ten-year passage since Police, Adjective, which raised questions regarding societal change that The Whistlers is poised to address. Now far removed from the dilapidated quarters of his former outpost, Cristi here traipses through modern Bucharest offices, though these can‚Äôt compare to the wealth he glimpses during his stay in the Canary Islands, which points up to both the criminal and neoliberal European economies in which the story can be situated. Within this updated context, the crisis of conscience at the center of Police, Adjective feels decidedly quaint, a point Porumboiu underlines when Magda (Rodica Lazar), Cristi‚Äôs unflappable superior, orders him to plant coke on Zsolt, and he refuses only out of self-interest. His much younger partner takes the responsibility without batting an eye, and the matter is resolved in under a minute, never to be brought up again.

The neo-noirish world that The Whistlers inhabits is fairly well served by its clockwork machinations, which revolve, as one might expect, around a large sum of money. For Cristi and slinky operative Gilda (Catrina Marlon), whose fates gradually entwine as the film goes on, this means tracking down the pair of mattresses in which the cash is hidden. But there‚Äôs also the matter of the film‚Äôs budget, Porumboiu‚Äôs largest to date, and to which his stylistic departure might be attributed. As the art film has its own mercenary economies, it‚Äôs difficult to imagine that the project would have been possible were it not for the film festival currency of the Romanian New Wave, or the entire apparatus of arts funding within the E.U. In this case, Porumboiu‚Äôs list of backers includes Komplizen Film, the German production company still best known for co-founder Maren Ade‚Äôs Toni Erdmann (2016), a film whose corporate-world milieu, though not directly coterminous with that of The Whistlers, remains just as beholden to the machinations of globalization and its ground-level economic implications‚Äîsubjects that Olivier Assayas, for one, has built his career upon. (One might also recall that Sandra H√ºller‚Äôs professional in Toni Erdmann starts in the Bucharest outpost of her consultancy firm, and by the end is stationed in Singapore, the emblem of Asian market capital, which is also where Cristi finds himself at the film‚Äôs close.) Porumboiu doesn‚Äôt seem interested in self-reflexively addressing his production considerations in the way that Assayas might. But the recurring emphasis on fiscal transaction (Cristi‚Äôs monthly salary of 1000 Euros, a faked escort encounter with Gilda, his mother‚Äôs sale of her longtime home) and collisions of language (Gilda‚Äôs whistled translations between Spanish and Romanian) nevertheless speaks to his awareness of the film's international market potential.

The Whistlers is Porumboiu‚Äôs springiest, most sprightly effort to date, incorporating amusing music cues (Iggy Pop‚Äôs ‚ÄúThe Passenger,‚Äù multiple renditions of ‚ÄúBarcarolle‚Äù from Offenbach‚Äôs Tales of Hoffmann), and cinephile references to both Hitchcock (a shower scene out of Psycho, a bout of catatonia from Vertigo) and classic Westerns (a rep screening of The Searchers, a sting operation on a former frontier town film set). As ever, though, Porumboiu maintains a kind of affected nonchalance. It would be too much to call his direction ‚Äúindifferent,‚Äù but his uninflected presentation of plot and character here tends to confound, rather than clarify his interests. There‚Äôs a faint frisson in seeing Porumboiu operate within the familiar boundaries of the policier-cum-heist film, but given the extent to which the art-house director‚Äôs well turned genre foray has become a festival circuit staple‚Äîone need only look to this year‚Äôs especially genre-heavy Cannes Competition slate‚Äîit‚Äôs difficult to find this turn truly galvanizing in and of itself.

The Whistlers doesn‚Äôt strain for seriousness, but neither does it demonstrate any real force of conviction. The exaggerated number of color-coded title cards distributed across the runtime for instance‚Äîone for each major character, as well as the El Silbo language‚Äîsuggests something of a spy thriller. But unlike, say, in the spy episode of La Flor (2018), which likewise upped the amount of onscreen text to complement its absurdly attenuated story, Porumboiu offers no greater (structural) context for that aesthetic gesture, so it goes from ironic to merely affected. As with so much in the film, the choice is simply there. The ontological heft of Porumboiu‚Äôs filmmaking gestures played better in the protracted waiting games of Police, Adjective and The Treasure (2015), or when dovetailed with Infinite Football‚Äôs (2018) conceptual ruminations. However one might respond (or not) to their cumulative impact, those films attempted to reshape genre templates according to a distinct personality, thereby challenging a viewer‚Äôs expectations. Here, what mainly lingers is the fact of Ivanov‚Äôs stolid presence, over a decade since his introduction in Cristian Mungiu‚Äôs 4 Months, 3 Weeks and 2 Days (2007).

‚ÄúThe hardest game is a simple game,‚Äù says a bemused coach in Infinite Football. With The Whistlers, Porumboiu seems to be attempting, for once, to play by the rules‚Äîto get his personality across within more stringent boundaries. And the results, mixed as they are, demonstrate something that‚Äôs surely understood by anyone who‚Äôs worked in a popular filmmaking vernacular: that the supposedly simple matters of genre‚Äî‚Äùthe unheralded ripple of physical experience, the tiny morbidly life-word detail which the visitor to a strange city finds springing out at every step,‚Äù to repurpose Manny Farber‚Äôs 1957 praise of underground films‚Äîare very hard indeed.