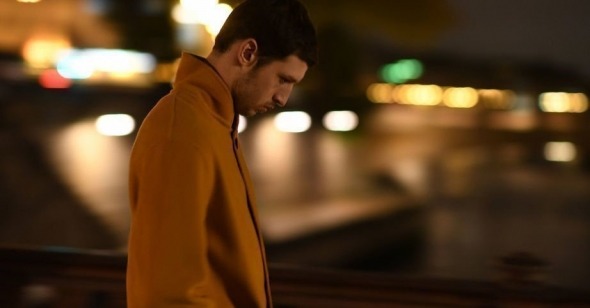 The Words Made Flesh
By Lawrence Garcia

Synonyms, Nadav Lapid’s Golden Bear–winning fourth feature, is an unruly movie in constant, careening motion. Its arresting overture alone incorporates a range of movements and contrasts, switching from a handheld, low-grade DV shot of a young Israeli traveler named Yoav (Tom Mercier) walking a rain-slicked Parisian street, to a sinuous survey of the unoccupied, unheated apartment where he encamps for the night. And it’s not long before he’s rushing through the building in the dead of night, desperate for help, his clothes and belongings having been mysteriously stolen, and the threat of hypothermia approaching ever closer. Already, Lapid’s film is vibrating to strange, infernal frequencies, at once shifting with Yoav’s eccentric behavior, yet maintaining a tense, voyeuristic distance from him. It is dawn by the time his upstairs neighbors—a well-off young French couple, Emile (Quentin Dolmaire) and Caroline (Louise Chevillotte)—find him naked and motionless in a bathtub, and subsequently carry him, pietà pose and all, into their own apartment.

By this point, it’s unclear precisely what level of realism or abstraction Lapid’s movie will be pitched at, and familiarity with his two divergent previous efforts—the two-pronged assault of Policeman (2011), the unstable virtuosity of The Kindergarten Teacher (2014)—doesn’t do much to clear things up. But the passage’s tactile immediacy, and the commingled sense of anguish and anticipation expressed therein, speaks to the thrilling precarity of Lapid’s latest, which occupies a world where perhaps the only sane response is a state of constant flight.

Save a couple of brief, possibly unreliable flashbacks to the Israeli military, Synonyms takes place entirely in Paris—the abode of many an artist and writer, and here Yoav’s designated refuge from what he terms “a country whose fate is sealed.” For this film, Lapid drew from his own experience as a twentysomething émigré who fled to the European city following his military service and who, while there, refused to speak Hebrew. (Later on in the film, Yoav observes that his own rejection of the language is not unlike his grandfather’s rejection of Yiddish, the “language in which he was beaten.”) Yoav’s daily meal—a half-pack of pasta, a quarter-can of crushed tomatoes, and two spoonfuls of crème fraîche; total cost 1.28 Euros—is the kind of detail that only first-hand experience would dictate. And his conception of experience as an accumulation of stories suggests nothing if not an artist’s temperament. In one of a few racounteur’s flourishes, he tells Caroline and Emile, with whom he enters into a kind of mediated ménage à trois, of how he once mistook a violin and bow for a shotgun and magazine, thus finding in an innocuous photograph of a young boy the potential for suicide. Apart from setting up the tensions between art and violence that course throughout the film, the scene suggests the potential for artistic distortion, and carries more than a tincture of madness.

In addition to his own time in Paris, the Israeli director has cited Nagel, the yellow-suit clad protagonist of Knut Hamsun’s 1892 psychological novel Mysteries, as a crucial model for Yoav, perhaps referenced by the mustard-colored overcoat—a gift from Emile—which he wears throughout much of the film. Anchored by Mercier, an astonishing performer here making his screen debut, Synonyms doesn’t progress in the usual sense, so much as constantly restart, leaping from scene to bewildering scene with an arresting illogic. Lapid makes the most of the actor’s impressive physical presence, showcasing his taut, sculptural physique (often seen in the nude) and his seemingly boundless intensity. Twice during the film Yoav breaks out into a manic, ecstatic dance—first in his spartan flat to nothing but the sound of his own breath (and for no apparent reason), and later in a crowded hotel bar to Technotronic’s “Pump Up the Volume,” with a loaf of bread incongruously in hand. In a different context, these might be reckoned as something like prophetic visions.

Though he’s an adroit orchestrator of discrete scenes, Lapid has thus far struggled to construct wholly satisfying narrative containers for them. So if Synonyms stands as his most accomplished work to date, that’s because it commits fully to an elliptical, disjunctive method. (Indeed, its greatest concession is that it eventually provides the viewer with enough information that what initially seems daringly irresolvable comes to feel merely ambiguous.) Twined as its movements are with Yoav’s psyche, Synonyms offers a frenzied, fractured Parisian tour, entirely removed from a sightseer’s casual wonder. During one of his numerous jittery jaunts through the City of Light, all filmed in a muddy digital stream as in the opening shot, Yoav repeats to himself: “Don’t look up,” rejecting the supernal beauty before him, just as he rejects his inherited identity. He visits the Notre Dame cathedral twice across the film, but neither time is there even a faint suggestion of the sublime. Nonetheless, a certain mythologizing tendency remains: because of his propensity for flight and the tales told to him as a child, Yoav considers himself a kind of Hector figure—although crucially, his parents’ tellings always withheld the Trojan hero’s fate.

Lapid’s muscular methods tend to favor the rough-hewn over the supple, the brash gesture over the subtle implication. This should not be counted as a deficiency, since the director’s willingness to disorient—to keep the viewer in a tremulous state of expectancy—provides Synonyms with much of its traction. One of his recurring formal gambits is to focus a viewer’s attention on the midground, only to then jarringly introduce elements into the foreground, creating spatial disruptions that are discomfiting in their proximity. And that penchant for rupture goes for the overall narrative as well, which descriptions threaten to render stridently symbolic, but which unfolds with an undeniably visceral punch. A bar scene set to the martial percussion of Ernie K-Doe’s “Here Come the Girls” sees fellow Israeli Yaron (Uria Hayik) on the brink of heckling a number of patrons; tensions flare, though no significant conflict arises. But the sequence is soon rhymed with one where Yaron dons a yarmulke and aggressively hums the Israeli national anthem to various Métro travelers, recalling the scene in Michael Haneke’s Code Unknown (2000) where Juliette Binoche’s actress character is harassed, and then later spit on, by a young Arab man in a subway car.

Lapid’s film shares with Code Unknown a conception of Paris as a matrix of sociopolitical conflict, though Synonyms all but dispenses with the baseline naturalism of Haneke’s urban treatise. Throughout its unbridled shifts and forceful collisions, psychology remains obscure, even opaque. What comes through most acutely in Lapid’s direction is an attention to cadence and rhythm, rooted in the oral tradition that he first explored with The Kindergarten Teacher, whose heroine Nira attempts to reconcile her understanding of a five-year-old boy (also named Yoav) with the apparent virtues of his spoken verses. In Synonyms, there is, of course, an awareness of the meaning of words—never clearer than during an integration class in which prospective French citizens recite “La Marseillaise,” and its line about “impure blood” is heard as if for the first time. But this is the rare film equally attuned to the purely physical way that they twist and roll off the tongue. As Lapid introduces vignette-like variations on a theme faster than a viewer is able to assimilate them—thereby fulfilling his film’s title—one might feel something of Nira’s struggle to grasp onto the words the young Yoav so carelessly cast into the wind.

Accounts of displacement, dislocation, and estrangement are, after all, hardly in short supply—but the autobiographical origins of Yoav’s self-imposed, self-abnegating journey, coupled with Lapid’s brazen flouting of narrative cohesion, gives Synonyms' examination of Israeli personhood an unusual force. After being rejected by the famed film school La Femis, Lapid returned to his home country, where an Israeli publishing house put out a collection of his short stories, and where he went on to attend the Sam Spiegel Film and Television School in Jerusalem. The end of Synonyms offers no such assurances to Yoav, who merely finds himself back where he began, attempting to breach a door that remains closed to him, with nothing more to show for his time in Paris than the existential fact of it. But in this most uneasy of films, that conclusion is also kind of equilibrium. The fate of this Hector may be unresolved—but he has new tales to tell.