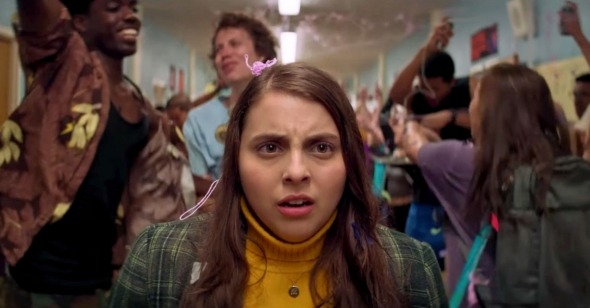 Into the Great Beyond
by Katherine Connell

The 21st-century American teen party comedy often views high school graduation as a liminal moment, in which the future opens up as a sublime void: scary and spectacularly exciting at once, a collision of past and present. What better way to release such conflicting feelings than to party? This genre evolved from the keggers of 1970s classics to become even wilder, more bro-y in the 1990s, and now take the generic form of EDM- and iPhone-fueled bacchanals. The formula seemed nearly exhausted by the release of Superbad (2007), which satirized hypermasculine gender performance amongst teenage boys while using the quest narrative to spoof the ways these films treat alcohol as a kind of Holy Grail.

Olivia Wilde‚Äôs directorial debut, Booksmart, is as much a response to Superbad as to the entire genre, which almost always centers on male heterosexuality, encourages a dangerous ‚Äúboys will be boys‚Äù sensibility, and reduces young women to objects or conquests. Booksmart reverses these conventions to focus on two teenage girls, Molly (Beanie Feldstein) and Amy (Kaitlyn Dever), for whom friendship has been as much an intellectual meeting of minds as an emotional connection. Molly is senior class president, an honor shared with Nick (Mason Gooding), a popular, easygoing hunk she thinks is an idiot. Molly‚Äôs strategy for surviving high school has been to love academics fiercely and ignore the rest of her peers, to whom she views herself as intellectually superior. Her mornings begin with mindfulness meditations surrounded by her gleaming valedictorian robe and paper cutouts of Michelle Obama, Ruth Bader Ginsberg, Mary Winsor, and other historical feminists. ‚ÄúLook down at everyone who has ever doubted you,‚Äù soothes the voiceover tape before turning crass: ‚ÄúFuck those losers. Fuck them in their stupid fucking faces.‚Äù

If Molly views her graduating class as ‚Äúlosers,‚Äù her one exception is Amy, with whom she shares a genuine passion for academics, politics, and social justice. In comparison to other teen movie underdogs, Amy and Molly aren‚Äôt lonely or vengeful for being overlooked: they‚Äôve lived in the library for four years but seem to have had a wonderful time doing it. Though they‚Äôre teased for their obsession with their teacher Ms. Fine (Jessica Williams), and nearly faint when she gives them her phone number to stay in touch, the moment is too delicious for mockery to register. Molly and Amy aren‚Äôt stereotyped nerds; they‚Äôre just excited by learning about the world and sharing that engagement with one another. While their topics of conversation range from Rosa Parks to Malala Yousafzai, they also have kindred chats about masturbation, their running jokes about Amy‚Äôs habits an antidote to the plethora of jacking-off jokes that dominate similar films focusing on young male heterosexual peacocking.

While Molly‚Äôs flaw is that she considers herself and Amy brilliant queens surrounded by commoners, Amy‚Äôs internal conflict is her desire for Ryan (Victoria Ruesga), a skater girl whose style functions explicitly as a contemporary update of Tai‚Äôs look in Amy Heckerling‚Äôs Clueless (a nudge to another woman-directed teen classic). Amy has been out as a lesbian for two years, but she can‚Äôt suss out if Ryan is gay, nor can she mutter out a coherent sentence in front of her. Their meet-cute is clich√©d, but Booksmart‚Äôs refusal to anchor Amy‚Äôs narrative in stock gay/queer narratives (the closet, coming out, peer homophobia) is not, allowing for a more original character arc. Despite its no-big-deal presentation, Booksmart doesn‚Äôt bracket Amy‚Äôs sexuality as irrelevant either. Rather, sexuality gets woven into Amy‚Äôs movement from shyness to risk-taking, rule-breaking assertiveness over the course of the film.

Booksmart is co-written by Susanna Fogel, Amy Halpern, Sarah Haskins, and Katie Silberman: a team perhaps too big to nail the project‚Äôs focal relationship with effective continuity. Wilde and the writers establish Molly and Amy‚Äôs intimacy in the condensed period of their last morning at school. Feldstein and Dever embody a mutual comfortability that seems convincingly built over multiple years. The easygoing tenor of the film changes, however, when Molly goes into a bathroom stall at lunch and overhears her peers crudely gossiping about her. Molly emerges with a prepared vitriolic speech to knock the students off their pedestals. However, Annabelle‚Äîwhom Molly views as the quintessential hot-popular girl without substance‚Äîbites back. Like Molly, Annabelle‚Äôs also going to Yale. ‚ÄúI‚Äôm incredible at hand jobs, but I also got a 1560 on the SATs,‚Äù she shrugs before listing the impressive post-secondary options of every other student in the bathroom. Molly floats in slow motion through the hallways trying to restore equilibrium.

To catch up with the rude awakening that her peers are smart despite a love of partying, Molly crafts an ‚Äúif they can do it we can‚Äù solution. Eager to prove (mostly to herself) that she‚Äôs fun, Molly convinces a reluctant Amy to attend Nick‚Äôs graduation party. Yet they have no idea where this party is. As the uninvited duo set out to find it, the typical night-before convocation surrealism unfolds. Booksmart checks most boxes of the quest narrative: the girls start their night out together, overcome obstacles or distractions, get separated, experience their own formative subplot adventures, and eventually reunite. As situations become more absurd, repressed annoyances and withheld information simmer. In tone, Booksmart is both bawdy and sentimental, fusing the spectacular with the intimate. When this works it really resonates, such as when Amy and Molly get picked up in a Lyft by their principal (Jason Sudeikis). When forced conversation wanes, they watch‚Äîas research‚Äîlesbian porn in the back seat. Of course, the headphones malfunction and suddenly the entire car is full of moaning.

Booksmart is on much shakier ground in its politics, which negotiate third wave feminism as both contextual backdrop and interest of its central characters. Amy and Molly are steeped in it from the women they idolize to the language they use. Because of its tonal confusions, Booksmart wants Amy and Molly to reflect teenage (in)experience with emotional authenticity, but also function as ciphers for larger ideological discourses about social justice that, predictably, the film doesn‚Äôt capably engage. Each secondary character is stereotype (the gay male drama students who hiss or are disgusted with menstruation) or reductive countertype, whose only substance lies in the way they play off of appearance (e.g. Nick, Annabelle, and Ryan). Most difficult to parse is Amy, whose room is bedecked with Free Palestine and Black Lives Matter posters, but has also deferred a Columbia acceptance to embark on a year-long service trip to Botswana around menstruation and feminism. Booksmart doesn‚Äôt do enough to trouble the ways this reflects a cringy teen na√Øvet√©, especially since everyone around Amy confirms that this chapter of her ‚Äúactivism‚Äù is totally awesome. But we never see Amy, a sheltered teenager with patches on her jean jacket, involved in any form of meaningful dissent. It‚Äôs unclear whether this is intentional or not, making it seem as though Booksmart views Amy‚Äôs outlook as reflective of its own progressiveness.

This boils down to an opportunity missed by Wilde and the screenwriters to deploy sharper satire that pokes fun at Molly and Amy‚Äôs limited outlook as white, woke-ish teenagers. It‚Äôs too bad, since Booksmart‚Äôs whole conceit is that these friends think they know more than they actually do. Marketing and reception of Booksmart has asked audiences to receive it as representative of a kind of feminist vanguard (a recent series of posters parody classics within the genre, one containing the tagline ‚ÄúYou read them wrong‚Äù), yet Booksmart produces a number of reductive tropes of its own. The pleasures offered by mainstream subversion are, as always, temporary.

Wilde flourishes best when using the body as source for surreal humor: the girls make balaclavas out of their ponytails and try to hijack a pizza delivery van, and in a stop-motion animated scene, they see themselves as plastic dolls when tripping on hallucinogenic chocolate strawberries. (‚ÄúWhere‚Äôs my chub?‚Äù wails Molly, grabbing her absent belly in horror, as they critique the sexist construction of their newfound bodies.) It‚Äôs uncanny, refreshing, and body positive. Booksmart‚Äôs most imaginative segments occur when Molly and Amy finally arrive at the party. Upon entering, Molly sees Nick and the lighting changes. They are suddenly spotlit, the rest of the house cast in dark blues and greens as the two perform a lyrical, deadpan interpretive dance, which better captures the youthful intensity of Molly‚Äôs desire than if she was just shown gazing at Nick across the room. In a scene soon after, Amy glides underwater to the crescendo of Perfume Genius‚Äôs ‚ÄúSlip Away.‚Äù As she swims, Amy submerges herself in the high of an evening where she took multiple risks. These dance and swimming sequences are ecstatic, focusing on sound and motion to seize the contradictory feelings encapsulated in sexual awakening, flirtation, and the end of school.

The morning after‚Äîgraduation itself‚Äîbecomes a moment of existential hangover. In Superbad this sadness figured as sexual and emotional repression between the two boys that was never quite relieved. In Booksmart, Molly and Amy experience conflict, but they‚Äôre too smart to let it hold them back. The ending of the film makes this clear, with Molly dropping Amy off at the airport to head to Botswana. Initially, the girls performatively shake off their fearful anticipation about a whole year apart and say an unsatisfying ‚Äúbye.‚Äù As Amy heads into departures, Wilde holds both friends‚Äô panicked faces in separate close-ups. Just as we expect this to be the film‚Äôs final thought, Wilde pulls out a reversal. Molly starts her car, only to nearly hit Amy, who has run back to her. Amy admits that she can afford a little bit more time, and the girls agree to get pancakes, grinning and shouting their excitement before the film cuts to credits. The best films of this genre gain nuance by connecting internal and interpersonal conflicts, communicating that there‚Äôs something else for the protagonists to learn before they‚Äôre released into the adult world. Booksmart, however, delights in the idea that the learning never stops. This may be an overly optimistic note to end on, but for a genre that‚Äôs always indulged and projected nostalgic fantasy onto young people, it might be the best possible outcome.