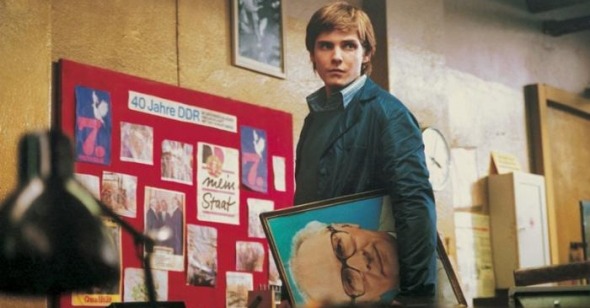 For a film that so fondly recalls Germany‚Äôs recent socialist past, Good Bye, Lenin! is awfully materialistic. As political as a pop tart, as full of product worship and as breezily incoherent as a VH1 retro special, writer-director Wolfgang Becker‚Äôs first stateside release is a valentine to East Berlin‚Äîwestern style.

A box-office hit in its native Germany (where fetishization of everything East German has been in full swing for more than a decade), Good Bye, Lenin! is the story of a boyish East Berliner, Alexander, whose mother, an ardent socialist, falls into a coma just days before reunification and awakens nine months later. To prevent a shock-induced relapse, he elaborately shields her from the changed city. This prolonged charade, which Alexander performs with mounting zeal, involves (but is not limited to): restoring the instantly retro furnishings of their flat, digging through garbage to find old eastern labels and pharmaceutically dispensing pickles into sanitized bottles, wearing vintage (last year‚Äôs) t-shirts and jeans, recruiting family, friends, neighbors, and strangers, and paying off school kids to sing party anthems at mother‚Äôs bedside. The best gag has Denis, Alexander‚Äôs co-worker and aspiring filmmaker, shoot shoestring news reports that are dead ringers for the real, and recently defunct, thing. These scenes, which are the heart of the film, afford the modest, gently tense pleasure of watching one character keep another in the dark. Eventually, like any joke administered this broadly, it wears thin: he can go much farther than you think, it takes a very long time for her to find out, and it takes even longer for him to find out that she already knows.

Part of the problem here is tone. Becker keeps shifting, from gauzy remembrance to melodrama to coming-of-age to satire to history lesson to slapstick, and often within the same scene. While this can work (I‚Äôm thinking of Philip Kaufman‚Äôs The Right Stuff, and Neil Jordan‚Äôs The Butcher Boy‚Äîalso cold war time capsules), Becker rarely lets individual scenes sing‚Äîhe‚Äôs pushing too hard to get to the chorus. And the really interesting aspects of the story get lost in montages. Wondering what their lives were like before ‚Äô89? Watch clips of home movies. How about the days of the wall‚Äôs demise, and the first months of reunification? Watch some news clips, and watch our characters get capitalist sugar highs (Coke! Burger King! Porn! Tanning Booths!). Becker even speeds up the camera to hurry us back to the main charade. Things slow down for the film‚Äôs final act, after the mother‚Äôs first (of at least four) realizations that things aren‚Äôt quite as they seem. The mother (played by Kathrin Sass) steals the film from here. If the familial pathos her awakenings generate feel unearned after nearly two hours of sitcom pantomiming, it‚Äôs consoling at least to see her face, a glassy-eyed variant of Bergman‚Äôs existential sufferers, take on the weight of true lies and inexorable change.

The only scene of political engagement is a pre-reunification rally for greater freedom in the East, in which our clumsy, apolitical protagonist meets the doe-eyed Soviet love of his life, gets arrested and causes his watching mother‚Äôs heart-attack-induced coma. All of this in about two minutes and all while police officers are beating the crap out of protesters. Here (and everywhere else) Becker hijacks the potent clash of ideas and ideologies with ye olde Freudian schematics: Alexander replaces his defector-father, bagging his bra-less girl from the east while mommy sleeps; his sister quickly finds a West German man but longs for daddy. When it‚Äôs revealed that daddy left the country for political rather than matrimonial disloyalty, the kids bring him back to end the cold war (taking down the metaphorical walls around their hearts, no doubt). Mommy then dies, and son is free to throw open the gates of the Soviet girl‚Äôs glasnost. Just in case the viewer doesn‚Äôt catch his drift, Becker makes his throbbingly implicit point explicit in Alexander‚Äôs concluding voiceover, complete with a Super-8 flashback to a young and pretty mother with hands on her little boy‚Äôs shoulders: ‚ÄúI will always associate that country with my mother.‚Äù

Conflating personal and political, psychological and ideological, nostalgia and memory, Good Bye, Lenin! pulls the very American trick of replacing one with the other. It‚Äôs one thing to attribute Alexander‚Äôs East German fascination to his love for his GDR-loving mommy, but it‚Äôs something quite different for Becker to just leave it at that. Oh sure, there are crowd-pleasing moments, as when Alexander decries the rapid commercialization of the city, scolding doctors and professionals for abandoning their neighbors for higher wages in the west, throwing devalued currency against the door of a newly Deutched bank. But these are easy targets broadly hit. Alexander‚Äôs cause is his mother‚Äôs illness, not a socialist revival. In fact, Alexander doesn‚Äôt even suffer the way many of his countrymen seem to‚Äîhe‚Äôs gainfully employed selling satellite TV to soccer fans. When he finally breaks the truth to his mother (though by now she‚Äôs hip to his game) he recasts reunification as a western flight to a benevolent east, an opening up of socialist ideals, the dummy newscast proclaiming, ‚Äúcareerism isn‚Äôt for everyone‚Ä¶and socialism isn‚Äôt about walling yourself in.‚Äù Sputtering such glib and illogical aphorisms to punctuate this silly counter-historical package of wish-fulfillment shows how quickly capitalist nostalgia collaborates and profits from even its dissenters.

Like a You‚Äôve Got Mail for shrugging-shouldered East Berliners, complete with corporations benefiting from being begrudged on screen, Becker‚Äôs film lacks the conflicted soul of its Berlin-set cold war comrade, Billy Wilder‚Äôs One, Two, Three. At least that film, made before the construction of the wall, had ex-pat anger to spare‚ÄîWilder is too bilious to bother with nostalgia‚Äîand the gumption to goose its movie-length Coca-Cola advert with a curtain-dropping Pepsi sight gag. Perhaps it‚Äôs most appropriate that Good Bye, Lenin! opened in New York on the same day as Starsky & Hutch. If you can laugh at funny clothes and feel nostalgic for a time and place completely divorced from actual time or place, then either of these are movies could be for you. High concept is high concept. I guess I‚Äôm guilt of expecting the film not based on a television show, the one set in a real city and in the more recent past, to have a better memory.