Life and Nothing More 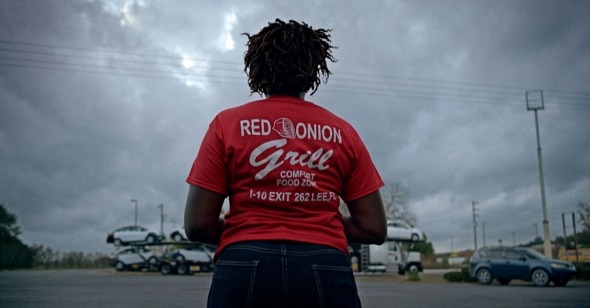 Titles can be misleading, but it takes a certain gutsiness in this day and age for a director to use the title Life and Nothing More, which suggests that one’s work is the most faithful possible facsimile of whatever corner of the world he has trained his lens on. But in his second narrative feature, Spanish writer-director Antonio Méndez Esparza has burrowed so deep inside the embattled lives of his subjects, a struggling black family in Northern Florida, that he earns the title through the sheer clarity and consideration of his approach, which places a neorealist lens on a story that owes as much to Charles Burnett as it does to Mike Leigh and John Cassavetes. (The latter’s namesake prize at the Independent Spirit Awards was bestowed upon the film this past March.)

Esparza, a 2017 Guggenheim Fellow and a professor of film at Florida State University, wanted to make a film about the hardscrabble experiences of the Tallahassee natives he encountered in his everyday life, and so he began writing a screenplay about a single mother who works in a Walmart. But that script began to substantially evolve through various conversations he conducted over the course of two years with locals, ranging from working men and women to students of various ages. Some of them eventually joined the ensemble of hardworking, nonprofessional actors, making crucial contributions to the narrative before and during production, directly shaping their scenes with Esparza through guided improvisations, and using their own given names as a way to remove the buffer between actor and character.

Life and Nothing More revolves around 14-year-old Andrew (Andrew Beechington), who has run into trouble with the law for breaking into cars, and his mother Regina (Regina Williams), an exhausted truckstop waitress trying her best to keep a roof over the heads of Andrew and his three-year-old sister (Ry’nesia Chambers). The family’s former patriarch is currently serving time for aggravated assault. We first meet Andrew and Regina on a public bus on the way to court as Regina berates a speechless Andrew, gruffly telling him, “I’m not doing this shit again. I’m fucking done.” Regina’s sincere and protective testimony on Andrew’s behalf at the subsequent hearing where he is given probation makes it clear that she wants the best for her son, but the two are constantly at loggerheads. When, early on, Regina comes home from work to a sink piled high with dirty dishes, it’s hard to blame her for losing her temper. But Esparza staunchly refuses to take sides and instead complicates our identification with each of his protagonists: before this blow-up we see Andrew bringing his sister home from daycare, bathing her, tidying up the living room of the family’s small apartment, hanging the wash on an outside clothesline, and, finally, reading his sister to sleep. In highlighting such moments, Esparza acknowledges the complexity of familial relations in even the most quotidian of circumstances and avoids the cut and dried dichotomies that hamper so many domestic dramas. The inclusion of this sequence may be a simple gesture, but the truth it illuminates—that so much of life’s interpersonal conflicts result from our inability to accept human error—is as quietly profound as the rest of the film that follows.

“Life is based on decisions you make,” Dawuan (Dawuan Williams), a friend and neighbor, tells Andrew within the first few minutes of the narrative. “You at that age where you got to start making better decisions for yourself.” Dawuan, an older black man who turned away from a life of crime in his own youth, doesn’t play a major part in the larger narrative after this initial intervention, but his attempts at steering Andrew in the right direction, his gentle entreaty that he grow up, make for one of the only instances in the film where we see an authority figure achieve a persuasive connection with our grudging but attentive male protagonist. Later, Esparza shows us Andrew blankly rebuffing the attempts of an in-your-face anger management teacher (Samuel C. Carter) to scare him straight and tossing aside a verbose but conciliatory letter sent by his father, who, as we hear in voiceover, wants to send his son books in hopes of opening his mind, if only he would offer a response. But Dawuan’s lecture reaches Andrew and encourages him to consider his behavior—that is, until friends his own age lure him back to illicit activities.

Regina, meanwhile, is considering her own future, which may lie with Robert (Robert Williams), a cheery and incorrigibly flirtatious truck driver who frequents the Red Onion, where Regina works morning, noon, and night shifts. He speedily ingratiates himself into her heart and life, bringing Regina personal pleasure and something resembling stability yet throwing her relationship with Andrew, who has no patience for the new man in his mother’s life, into further turmoil. The scenes of Regina and Robert’s courtship are peaks of conversational, improvisatory cinema, yielding off-the-cuff gems and silences that buzz with electricity, subtly upping the stakes of this deepening acquaintance. In one dialogue, set outside the Red Onion at dusk and delivered in a single, exquisite shot, Regina gives Robert the third-degree about his life leading up to this point (he has a daughter and is frequently on the road) while refusing to spare him the hard facts of her life, at once warding him off and delicately toying with his flagrant affections.

This scene epitomizes Esparza’s restrained filmmaking style, with its penchant for richly lit but stylistically sparse photography that cuts to the core of a scene and static, medium-long shots captured in the wide-angle lenses of an unobtrusive and often immobile camera. By keeping their camera movements at a minimum, Esparza and his Romanian cinematographer Barbu Balasoiu (who shot Esparza’s earlier Aquí y Allá, as well as Cristi Puiu’s Sieranevada) allow us to take in every detail of an image and see these exchanges unfold in real time, with the slowness and spontaneity of life itself. When Esparza and Balasoiu break from this method, it matters. During Regina and Robert’s first date in a pool hall, the camera itself seems to loosen up as the prospective couple relaxes in one another’s company, calmly following their back-and-forth, moving as they move, allowing them to come nearer for impromptu close-ups before editor Santiago Oviedo cuts away to a wider shot that shows us the bigger picture.

Esparza never lingers too long on these moments of levity and intimacy without letting the real world eventually interrupt. Regina gradually becomes comfortable enough in her relationship with Robert to share not only her bed with him but also her inner life. One night, while the two lie half-dressed in bed, she reads aloud one of her poems, a stirring piece called “Cold World” about the resilience that keeps her going, unveiling a creative interest that neither we nor Robert had any inkling of until this point. Her reading is temperate but full of pride and his response is enthusiastic; he encourages her to go back to school and pursue this passion. But she knows immediately that this is a financial impossibility and tucks the idea—and this writerly pursuit—away; after this, Esparza never allows us to hear another of the character’s verses.

Life and Nothing More could have easily been a work of near-unflagging miserabilism, but the commanding work of Esparza’s actors ensures that his film steers clear of such flatness. Beechington wears his character’s seriousness, which even his father can detect in the photos sent to him in prison, like a suit of armor. Considering his well-established taciturnity, the rare occasions where Andrew lets his guard down—looking after his sister, trying to forge a genuine connection with a female scene partner in his drama class during lunchtime—are all the more powerful and perfectly played by Beechington with hushed, mindful sweetness. But the crowning achievement of this drama is the game and invigorating performance of Williams, who animates every aspect of her character’s personality, from her flinty exasperation to her no-guff candor to her sly, self-protective sarcasm, with low-key gusto and mesmerizing naturalism. Hers is a performance suffused with compassion yet devoid of cheap and easy sentiment, evoking the same clear-sighted humanity that permeates Esparza’s film and becomes, modestly yet unmistakably, its own form of political engagement.

Esparza depicts his characters’ actual beliefs with sidelong casualness. At one point, in a scene that serves as quick contextualization, a radio reporter drones on about Donald Trump and Paul Manafort as a currently car-less Regina chats with a friend who is giving her a lift to the restaurant. Later, Esparza films Regina from behind as she sits and watches the results of the 2016 presidential election in the Red Onion after a long day, nothing in her comportment betraying any discernible interest. By this point, Regina has already made her opinions known in a scene where she bemoans the divisiveness of the election with her coworkers and maintains that she simply doesn’t have the time to get involved. For Regina, the winner hardly matters; the players of the game may change, but the inequity of her situation as a black woman residing in a Red State remains the same.

Esparza alights only briefly on moments like these, keeping our attention where it should be: on the actualities of this family’s existence, which occasionally comes face to face with the callousness of their oppressors. A tense and pivotal confrontation between Andrew and a white man in the private park of a nearby suburb is a nerve-wracking illustration of this friction, culminating in our protagonist pulling a knife on the stranger, who is in the company of his wife and young child, a decision that drives Andrew further down a path to punishment. Esparza doesn’t paint Andrew as faultless, but what really lingers from this altercation is the baseless self-preservation of the “upstanding” white patriarch whose paranoia and pretend concern over Andrew’s mute presence on his land is quick to boil over into goading, sharp-tongued rage. He regards this child with the same mercilessness of the penal system; to them, he is nothing more than a body to be discarded, kept out of sight behind bars and concrete, an inevitable number in a system built on the confinement of black lives.

In choosing to dramatize the flawed bonds and ordinary interactions of these characters, Esparza and his collaborators have made a film about black men and women who refuse to let themselves be defined by a society that routinely deprives them of nuance and humanity. None of the artists involved have shied away from representing the grim realities of Andrew and Regina’s world, but there is a subdued, hard-fought optimism in the film’s flash-forward epilogue, which evinces a full-hearted belief in the possibilities of redemption and reconciliation, as well as our capacity for change, portrayed here as an ability to reckon with oneself and one another. In its final minutes, Life and Nothing More articulates that it’s an act of no small bravery to look in the face the very thing you have been running from, ready to be heard but also to hear.