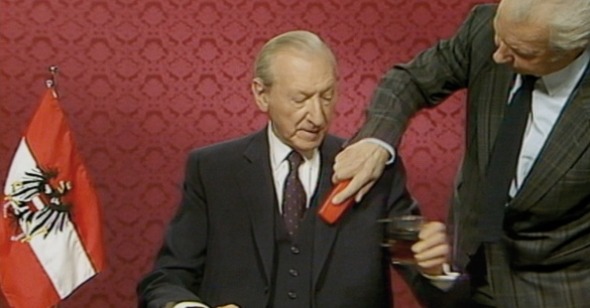 In Plain Sight
By Sierra Pettengill

Kurt Waldheim began his Presidential run after serving as the Secretary-General of the United Nations for the majority of the 1970s—a position he proclaimed made him the “moral authority” of the world. The official story he tells of his role in World War II is that he was forcibly drafted into the German army, discharged following an injury in 1941, and that he then focused on studying law. It’s a wartime experience that’s been normalized as a narrative among Austrians, as it aligns with the collectively agreed-upon delusion that Austria’s citizens were “Hitler’s first victims.” The Waldheim Waltz is structured as a tense countdown to Election Day. By the time the clock runs out, a tsunami of evidence detailing Waldheim’s participation in genocidal SS operations has swelled.

When Waldheim’s election bid began in the mid-1980s, Beckermann had made several documentaries in her native Austria. She was also an engaged activist, recording some of the protests against his burgeoning campaign. The Waldheim Waltz draws from Beckermann’s personal VHS tapes to augment broadcast news coverage of the lead-up to his election. Despite her dedicated political involvement—in one scene, she is part of a group of sign-wielding protestors interrupting a live, televised press conference—the ruminative and poetic narration that Beckermann voices throughout the film is far from polemical. Contemplating the choice to include Waldheim’s voice on the famed Voyager Golden Records, shot into space in 1977 to speak for all of Earth’s humanity, she asks, “What will be remembered?” Though the film unfolds over two months in the spring of 1986, moments like these show that she is taking the long view, looking back with a zoomed-out perspective.

Once it starts, the damning evidence, mostly uncovered and presented by the World Jewish Congress, doesn’t stop revealing itself. First there’s Waldheim’s military record card, revealing that he had been a member of the SA, or storm-troopers, and the National Socialist Student’s League since 1938. Then there’s the revelation that he was on the staff of Austrian war criminal General Löhr, who was hung for his crimes in 1947. There is the supposition of his participation in the 1942 Kozara massacre, in which 2,000 partisans and civilians in Yugoslavia were murdered, and finally the impossible-to-miss deportation of 60,000 Jews from Thessaloniki, Greece, where Waldheim was revealed to have been stationed in 1943. The candidate, his party, and his family are shown repeatedly dismissing all accusations. Facts and evidence be damned—their defensive tactics flip through the playbook of Jewish conspiracy, foreigners meddling with internal politics, thinly veiled anti-Semitism, and appeals to narratives of WWII Austrian victimhood. “I went to war, but I did my duty like thousands of other Austrians who served as soldiers in the war,” Waldheim says, denying that he was anywhere the many photographs reveal him to be, or that he witnessed a quarter of Thessaloniki’s population being loaded off to concentration camps. It’s astounding how simply the truth about his background is uncovered, and equally so astounding how long Waldheim held major diplomatic positions on the world stage without anyone bothering to look through an archival record or two. One of Beckermann’s larger points is that it shouldn’t be astounding at all: The Waldheim Waltz is not a film whose primary mission is to convince the viewer of Waldheim’s complicity, though it effectively manages that beyond a shadow of a doubt. Instead, it’s a film that slowly reveals the dangers of warped and buried historical memory. By utilizing a structure that builds the inevitability of his guilt alongside the inevitability of his victory, The Waldheim Waltz ultimately shows how little the mere revelation of truth actually matters, absent a much grander reckoning.

The archival video material that forms the bulk of The Waldheim Waltz comes from a mix of international and national broadcast television sources: U.S. Congressional hearings, a series of World Jewish Congress press conferences, Austrian television chat shows and interviews, long-form British television reporting, and staged campaign appearances and rallies. Cinematically, this secondhand archival footage is mostly banal. Aside from a few explosive interview moments where Waldheim loses his patience with his inquisitors, the rehearsed reasonableness that is the hallmark of the evening news flattens the uncovered allegations and atrocities, reducing their impact. Many filmmakers have taken various approaches to transforming the staleness that’s often the defining feature of archival documentation—particularly that of the bureaucratic kind—into emotionally and narratively persuasive cinema. For instance, Eyal Sivan’s dramatic and controversial interventions of exaggerated sound design, editing, and visual effects into the staid Leo Hurwitz footage of the Adolf Eichmann trial—itself an event whose banality famously challenged our perceptions of evil—for The Specialist (1999). Beckermann’s touch is lighter, if arguably more probing, calling direct attention to what is being documented and why. “What does one see? What does one not see?,” she asks, showing photographs of the Thessaloniki deportation taken by German photographer Walter Dick. She simultaneously wields these photographs as proof of the vast and unavoidable scale of the tragic event (there’s no way Waldheim was there and missed it) and to point out that no one has ever asked what, exactly, Dick himself was doing there during the war. It’s a subtle but consistent interrogation, and by calling attention to what images are projected and received, she reveals the process by which narratives can be made and unmade.

“Why had people suddenly become interested in him? What had changed?,” her narration asks, as the press starts to pay attention to Waldheim’s past, having ignored it since his political career began in nearly 40 years prior. After paying lip service to a series of publicized political events—Reagan’s visit to the graves of Nazi soldiers at Bitburg, the repatriation of war criminal Walter Reder from Italy back to Austria—Beckermann’s answer is, in the main, Claude Lanzmann’s Shoah, released in 1985. “Ultimately,” she declares, “it was a movie that changed everyone’s awareness, that helped people imagine the extent of the Shoah.” It’s precisely this imagination that matters, which allows us to erase old narratives and write over them. ”And now death is forever inscribed in the beauty of the Polish forest, in the beauty of Austrian nature,” she concludes. And as an exasperated American politician explodes at Waldheim’s simpering son, who excuses his father’s failure to notice or remember the atrocities of the war: “This is not like a movie that you choose not to see. This was the central fact of life in the Balkans!”

Ultimately, The Waldheim Waltz seems to argue, it’s this idea of death forever being inscribed, this inability to turn the movie off, that’s required of all of us. To acknowledge that Waldheim’s past sins disqualify him for office would necessitate a wide societal reckoning with Austria’s role in WWII, a total rewrite of the country’s self-identification as innocent victims of the Nazis. The truth of Waldheim’s past won’t matter until all of Austria undergoes the same process. You can sense the desire to be let off the hook when a member of Waldheim’s party tells a hall of crowded supporters: “We won’t be talked into a collective guilt of all Austrians of whatever political or religious conviction. There is no historical instance of collective guilt.”

Austriais currently ruled by a coalition of the center-right and the radically far-right Freedom Party, founded by former Nazis in the 1950s; The Waldheim Waltz goes a long way into helping us visualize how and why. These are times that call for Hannah Arendt, and, unsurprisingly, her warning words from her essay “Truth and Politics” resonate: “The chances of factual truth surviving the onslaught of power are very slim indeed; it is always in danger of being maneuvered out of the world not only for a time but, potentially, forever.”