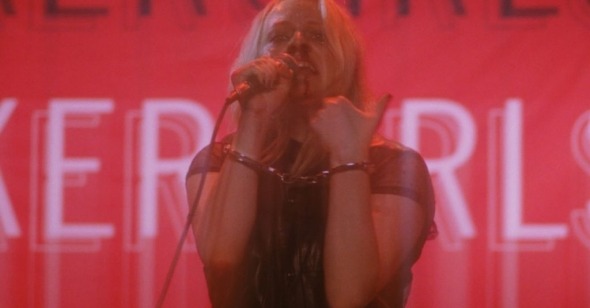 She Walks on Me
by Demitra Kampakis

Alex Ross Perry’s oeuvre boasts a generous offering of narcissistic characters, and his latest film, Her Smell, is no exception. A shrieking fever pitch of a film chronicling one woman’s descent into self-destructive madness, Her Smell has echoes of Perry’s 2015 Queen of Earth, which also charted a female protagonist’s psychic unraveling. In both films, Elisabeth Moss plays the character at the center of this swirling psychological vortex, and does so with a reckless abandon that’s cathartic and very impressive, if not slightly unnerving in its commitment. Moss is the kind of actor who gives herself fully to every role she plays—as evidenced by the physicality of her performances, her gnarly facial contortions and twitches, and her wide-eyed responses to her environment—and here too, she brings a raw, gritty energy that’s completely stripped of any vanity.

Moss plays Becky Something, the lead singer of a popular ’90s alt-rock indie band named Something She. Narratively structured into five discrete chapters or vignettes that unfold in more or less real time, each preceded by a VHS recording of the band at a different stage of its career, the film opens with grainy footage of Something She’s early days, in which Becky and her band mates—Michelle Hell (Agyness Deyn) and Ali van der Wolff (Gayle Rankin)—share the giddy rush and innocent thrill of newfound success. We then cut to the present day, as the band prepares to take the stage for a sold-out show at a venue named Her Smell. It’s only once the show is over, as we follow the musicians backstage, that we quickly grasp Becky’s horrifying personality transformation. Erratic, emotionally abusive, and violently paranoid, she all but ignores her one-year-old daughter, lashes out at anyone who has the misfortune of being a convenient target, and engages in bizarre and delusional spiritual rituals led by a charlatan shaman whose “teachings” only push her closer to the brink of insanity.

Frequently going on unhinged rants while talking a mile a minute—sometimes assuming various personalities—Becky is a ball of feral toxicity who treats those close to her as verbal punching bags, and whose hysterical fits are clearly fueled by her substance abuse. With every tense and intimately filmed confrontation, it’s all too clear that this character is more than just an insufferable and megalomaniacal bitch; she’s on the cusp of a seismic mental breakdown. Think of her as a fictional analogue to Courtney Love. At first, Becky’s fellow musicians, family, and friends grit their teeth and bare it—tolerating her behavior either out of pity or financially driven complacency—but they too eventually reach their breaking points as Becky’s situation becomes direr over the course of the film’s first three acts.

Because Moss is a maestro at tapping into her id, Becky Something is the kind of dynamic character she was born to play—and she sinks her teeth into the role. There are even traces of De Niro’s Raging Bull character Jake LaMotta in Moss’s performance; she channels not only LaMotta’s abusive tendencies but also the pathos lurking beneath the surface. A character like Becky could easily veer into caricature; but Moss brings a nuance that betrays Becky’s deep pain and anxieties. We see flashes of this after each tantrum and tirade; her face ever so subtly conveying the profound loneliness that causes Becky to alienate everyone in her life, which also includes her mother (Virginia Madsen); her ex-lover Danny (Dan Stevens), also the father of her child; and her record producer Howard (Eric Stoltz). After all, if you’re the one pushing people away, then you never give them the chance to hurt or abandon you. This is all totally self-destructive and self-defeating, of course, but as the film makes clear, one has to hit rock bottom before those insights can be gleaned. This is precisely why Perry takes his time charting that downward spiral before allowing some form of closure, however painful and pathetic the journey isto witness. Perpetually strung out with mascara running down her face, Becky is a mess, yet even when she’s spewing the most noxious invective, Moss’s finely calibrated performance allows Becky to be vicious and vulnerable, ferocious yet fragile.

Perry understands this in his muse, and the film’s formal style reflects their creative symbiosis. A histrionic and operatic ballad of manic depressiveness, Her Smell can be an exhausting and uncomfortable watch—but that’s precisely the point. It’s an immersive and experiential approach that directly plunges us into Becky’s troubled headspace, because we’re meant to suffer along with her and those she abuses. It’s not enough to invoke a palpable sense of suffocation; Perry wants to induce it. Through jittery camerawork, frequent use of intimate close-ups, sustained reaction shots that stay on a person’s face as they listen to others, and nimble long takes that frenetically follow the characters in close quarters, DP Sean Price Williams’s vibrantly aggressive cinematography gives the film a kinetic energy that’s intentionally claustrophobic and dizzying. Shooting on 35mm, Williams imbues each set piece with a distinct visual palette—whether it be the bright white of the recording studio, the airy natural lighting of Becky’s home, or the neon-pop color scheme of the backstage dressing rooms—and Keegan DeWitt’s pulsating score further heightens our sensory stimulation.

Throughout Her Smell, Perry allows each scene the necessary room to breathe, and observes every chaotic interaction with voyeuristic intimacy. In doing so, Perry and Williams implicate us as spectators, as we helplessly gawk at the train wreck unfolding before our eyes. While the use of backstage long takes may seem reminiscent of Birdman, there’s actually an Aaron Sorkin-esque quality to Perry’s chatty and briskly paced dialogue—its patient pacing actually bears more resemblance to the banter seen in Danny Boyle and Sorkin’s Steve Jobs. And just when it seems as though the film has become unbearable and perversely masochistic to watch, Perry rewards us in the final two acts. With sobriety, civility, and redemption potentially on the horizon for our troubled rocker, it feels like an invigorating respite for both the characters and the audience. We may not know exactly what in Becky’s past brought her to this mental precipice, but her character is likely deliberately opaque. How Becky got there is irrelevant—all that matters is where she goes from here.