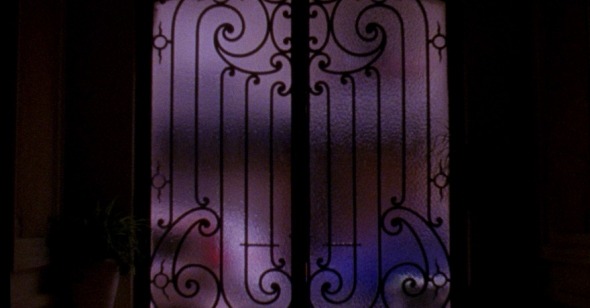 “I want to create some new memories.” A seemingly inconsequential line uttered in soft voiceover barely a minute into Maison du Bonheur captures the theme that lies at the heart of the film: the desire to reconstruct one’s own history and image. This sophomore feature documentary from rising Canadian director Sofia Bohdanowicz follows Juliane, an enigmatic 77-year-old Parisian astrologer. After seeing Bohdanowicz’s short films about the director's paternal grandmother, a friend of hers asked if she would consider making a film about her mother, Juliane. Bohdanowicz agreed and instead of doing any preparation decided to fly to Paris to stay and film with her without so much as meeting, talking, or emailing. Over the course of the film, Bohdanowicz and Juliane live together as strangers for 30 days, which allows the audience to get to know Juliane at the same time as Bohdanowicz does. The first shot of Paris we see is the entranceway and stairwell of Juliane’s apartment. And the film continues to rely on the particular rhythms of Juliane’s life; a daily ritual of making coffee and watering geraniums, the little joys of visiting a nail salon or hairdresser, the satisfaction of baking bread for Shabbat—life as light-hearted liturgy.

These vignettes, often narrated with an infectious joie de vivre from Juliane, seem only natural, but they’re also born of necessity, because Bohdanowicz shot on a wind-up Bolex (purchased from EBay and untested before shooting began), with 30 rolls of 16mm film amounting to 90 minutes, of which 62 made the final cut. Without the option of extensive reshoots, or testing locations or shots, the film relies on the question of Bohdanowicz and Juliane essentially existing together, one in front of the camera, the other behind. This cohabitation plays out in fascinating ways: for instance, the Bolex can’t synchronize sound, so Bohdanowicz ended up personally making Foley effects for the film, often by literally repeating Juliane’s actions (such as making bread). The result is a direct, yet gentle symbiosis, with a transparency in its form; Bohdanowicz allows herself to be present, often as a disembodied guide—she tells Juliane, along with her sister and brother-in-law, who are in the middle of toasting to “the beautiful Sofia,” to “do that again, but this time pretend I’m not here”—and so the illusion of objectivity is discarded immediately. The apparatus of the film laid bare, Maison adapts its form to see its subjects more fully.

Bohdanowicz’s documentary work is particularly attuned to presence. From her acclaimed 2013 trilogy of short films, Modlitwa (A Prayer), Wieczor (An Evening), and Dalsza Modlitwa (Another Prayer), to her 2016 debut feature film, Never Eat Alone, Bohdanowicz punctures the airs of realism, deflating any sense of self-importance or pursuit of formal vérité, instead allowing the revelation of attention—a loving witness to the simple presence of people, their material possessions, and the spaces they inhabit—to permeate her approach to cinema. She’s been consistently compared with Chantal Akerman and Agnès Varda, which can feel limiting, but they remain apt points of reference in Maison, with its ruminations on the private and public personas of women, and its suffusions of quickening curiosity and generous spirit. It’s the work of a filmmaker constantly trying to come to terms with her past, to find a thread of continuity between the inner lives of various generations, and to explore one’s place in the world.

Maison du Bonheur continues to work through these themes while reveling in the commonplace of everyday Paris through the perspectives of both Juliane and Bohdanowicz: gorgeous colors captured on 16mm limn the world through a provisional nostalgia—the luminous shades and textures of a dream. Bohdanowicz creates a new personal memory of the city by channeling Juliane’s memories. But Bohdanowicz also allows certain gaps and questions to conspicuously surface within the lives on screen, ellipses left by words unsaid. Juliane is quick to share stories of herself and her journey into astrology, but the persona she reveals is a clear construction. Juliane guards herself from being too vulnerable even as the form of the film requires a level of intimacy on her part, so while her interior life is hinted at, whether through wistful references to her grandchildren or recently deceased husband, Bohdanowicz never pries into those compartments of her life.

These lacunae are mirrored in Bohdanowicz’s own role as both filmmaker and subject, the latter of which reshapes the film’s identity. Her voiced desire to “create new memories” stems from an emotionally disturbing experience she had living in Deauville, France, as a teenager, and late in the film she steps away from Juliane’s life, traveling there by train to confront her past. Reluctant to indulge in personal history, Bohdanowicz continues to capture sensory details: trees rushing through the train window, rows upon rows of furled brightly colored umbrellas standing upright along the beach (resembling Juliane’s garden of flowers, and closed as tightly as Bohdanowicz is tight-lipped about her past experience here), and various ominous shots of her old high-school. Her traumas are left unexplored; as it starts to rain, she watches the downpour from a bus stop, and then returns by train.

Just prior to the Deauville trip, Juliane offers Bohdanowicz an astrological reading, and she notes how “no one really knows themselves,” before telling Bohdanowicz, “You don’t like to tell everyone everything. You need your own secret garden.” Bohdanowicz, while remaining intimate and personal, uses the making of the film to cultivate her own secret garden, to weave new memories and experiences around her mysterious past, refusing to invade Juliane’s privacy (or her own) to cater to an audience, or to manufacture catharsis. Maison du Bonheur is a celebration driven by good-natured curiosity, rather than an investigation, of all those who live in their own personal “maisons du bonheur.” Bohdanowicz’s attention to diurnal routine may point towards the rich inner life of herself and Juliane, but Maison du Bonheur affirms that while the audience may partially share in it, they have no right to know it.