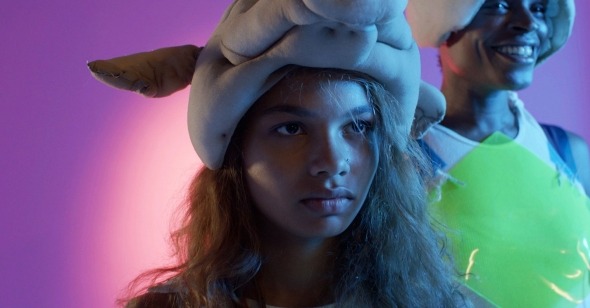 Theater on film is notoriously unconvincing. What feels vital and engrossing live can look hammy and grandiose on screen. Whereas in live performance, the frame of the stage is a perpetual reminder of the separation of theatrical fiction from the world, a film can sustain the impression of a photographic record; when set inside a film, the theater tends to look fake and the film tends to look real. For filmmakers interested in thinking about the boundaries of performance, this dichotomy is the point: the clarity of the theatrical frame allows them to underline its transgression, for instance when actors interpenetrate their own personal lives with the characters they play, as in Cassavetes’s Opening Night and Assayas’s Clouds of Sils Maria. However, a common effect of the film’s authority over the theater it represents is that the theater just looks like bad art (c.f. the absurd set of the stage play in Opening Night). And so there’s often a mismatch between the apparent admiration and love of actors that the inclusion of theater evinces (theater, after all, is supposed to be the actor’s medium) and the underwhelming cinematic result. And, indeed, watching some contemporary films about theater, like Iñarritù’s Birdman, Alison Maclean’s The Rehearsal, and now, Josephine Decker’s Madeline’s Madeline, I wonder whether that is in fact the point. Theater in these films is not there to be good. Usually, as in Madeline’s Madeline, it’s there to be bad: to act as the film’s antithesis.

In Madeline’s Madeline, a young woman named Madeline (Helena Howard) with an unnamed psychological disturbance has joined a devised theater company and becomes enmeshed with the company’s director, Evangeline (Molly Parker), who begins to use Madeline’s life as fodder for the theater piece she’s creating. She stages Madeline’s dreams and fears, instructs the company to do improvisations around her troubled relationship to her mother, Regina (Miranda July), and guides Madeline into a confessional monologue directed at her mother herself, whom she’s invited into the rehearsal. Madeline is initially flattered and excited by Evangeline’s attention, but becomes increasingly rebellious, ultimately taking part in the surreal coup that concludes the film. As its title suggests, the film strongly implies that we are witnessing Madeline’s own version of her life: the camera hews closely to her perspective, representing her affective perceptions with blurred movement and transparent colors, and dramatizing her theatrical transformations (when she does an improvisation as a sea turtle, we see her in a turtle suit on a beach).

Howard is a magnetic performer: the scenes in which she acts out—impersonating a homeless person on the street, aggressively flirting with Evangeline’s husband—are potent and scarily plausible. Her candor carries the film. And Decker lovingly represents the chaos and grace of teenage consciousness, staging Madeline’s shaky sexual power with both sympathy and rue. Her commitment to her subject’s perspective lead her and cinematographer Ashley Connor into vivid and resonant sequences, like the finale, which transforms recurring images, like the animals whose embodiment liberates Madeline throughout the narrative, into ardent, if very earnest, choreography.

But that commitment is also part of the film’s weakness. The only way I can understand the depiction of Evangeline, who comes across as a terrible director, not just unethical but incompetent, is as a projection of Madeline’s view of her. If a director today acted like Evangeline does towards her cast and subjects, especially a white director with a diverse cast and a main performer of color, the actors would most likely walk out immediately (one odd detail for a theater-goer is that one of those actors is played by Okwui Okpokwasili, one of the most brilliant artists working in New York theater today: I spent those parts of the film thinking, “Okwui Okpokwasili would never stand for this”). But if following a teenager’s perspective means giving up the complexity and subtlety in your view of adults, it’s not a satisfying trade-off. Evangeline’s character ultimately feels less like Decker’s self-critical foil and more like an alibi. (The gambit works better with Madeline’s mother, vulnerably and self-effacingly played by July, whose outbursts are more empathetically treated.) The rehearsal process bears only superficial relationship to actual devised theater (there’s a tell when Evangeline uses the word “immersive” incorrectly): theater actors in 2018 have more nuanced ways of talking about the power dynamics of the rehearsal room and the ethics of representation than you would think from watching this film.

This is not a cosmetic problem. Were Evangeline more sympathetic and self-aware, we might ask ourselves how our enjoyment of Howard is so different from hers of Madeline, and how our continued appetite for performances of female psychological fracture fits into a history of condescension and exploitation. Decker’s film seems to want to take part in this important conversation. But the film doesn’t reflect enough on its own participation in that history. We have, after all, come to watch a film about the psychological fracture of a beautiful and charismatic young woman. And for all its aesthetic satisfaction, the dreamlike revolution of the finale, with Madeline subsumed into the company of performers, their faces disguised, also struck me as false on the one hand and unintentionally masochistic on the other: a triumph for the filmmaker rather than the character, and an erasure of the actor. If this breakthrough of self-disintegration represents Madeline’s Madeline, or Howard’s Madeline, what it reveals more than anything is the unacknowledged underside of her desire to perform: her drive to disappear.