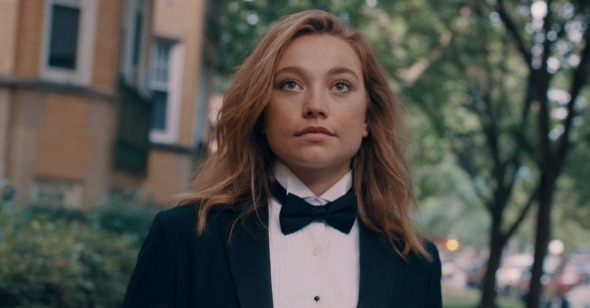 The term “queer” has often emphasized the belief that those with non-normative gender identities and sexual orientations can aggressively challenge the conventions of the society from which they stand somewhat apart by nature of their difference. A frequently cited phrase neatly sums up the attitudinal distinction between this and a less explicitly politicized conception of LGBT identification: “I’m not gay as in happy, I’m queer as in fuck you!” It struck me, then, to come across a recent Indiewire article whose headline proclaimed, “Princess Cyd Director Stephen Cone is the Best Queer Filmmaker Ignored by the Film World.” It seems eyebrow-raising to think of Cone’s gently observational character studies as occupying the same cinematic universe as smash-the-system provocations by directors like Gregg Araki or Bruce LaBruce. Upon further reflection, however, the term queer fits Cone like a glove, as his films point to another important and at times underappreciated meaning of the word. In Cone’s world, queerness is less about the polemical assertion of identity than about recognizing the endless flux of experience and desire that renders labels and classifications at best arbitrary and at worst stultifying. It’s a kind of queer humanism, empathetic in its bemused understanding of sexuality’s mysteries and political in its acknowledgment of how those mysteries shape the contours of how we exist in the world.

Princess Cyd proves a very worthy addition to this significant and growing body of work, even as it moves away from some of Cone’s more established directorial traits. While The Wise Kids (2011) and Henry Gamble’s Birthday Party (2015) charted wide-ranging ensembles, Cone’s latest retains a generosity of spirit but restricts much of its screen time to its two chief protagonists. As the film begins, 16-year-old Cyd (the luminous Jessie Pinnick), has traveled from her home in South Carolina, where she lives uncomfortably with her depressive single father, for a two-week summer stay in a Chicago suburb with her aunt Miranda (Rebecca Spence), a renowned author whom Cyd has not seen for years. (It gives little away to reveal that Cyd’s mother was killed when she was a young girl, as Cone begins the film with a deft revelation of tragedy that recalls the similarly direct opening of You Can Count on Me [2000]). Little happens and yet everything happens as the two women share Miranda’s house. They tentatively reconnect with one another, acknowledging the gulfs of experience and temperament that separate them while slowly coming to terms with how the death of Cyd’s mother (Miranda’s sister) has quietly shaped their understandings of familial intimacy and trust. The summer brings a sexual awakening for the seemingly straight Cyd, who meets and falls for sweetly punky barista Katie (Malic White). Miranda discovers nothing so immediately new about herself. As she bonds with her niece, however, she begins to reconsider her life of the mind, which seems to often come at the expense of physical pleasure and romantic connection.

This narrowing of narrative focus results in some small but notable developments in Cone’s visual design. One looks back on Henry Gamble and recalls a sense of constant yet patient movement, shifting perspectives across a menagerie of characters as they maneuver their way around and towards one another in a shared space. While the film includes one of Cone’s by-now signature party sequences, Princess Cyd largely eschews these denser crowds of characters, opting for precisely timed shot/reverse shots and leisurely paced two-shots to capture Cyd and Miranda’s growing emotional bond. There’s a particularly well-crafted single take as Cyd and Miranda first discuss the latter’s writing projects over dinner on the back porch, the inexorable zoom-in on the duo mirroring their halting movement toward mutual understanding. Such cinematographic shifts are balanced by stylistic continuities with Cone’s past work, including a sharp ear for pop music and judicious use of slow motion that loops us into the subjective states of characters navigating uncharted waters of self-discovery.

Cyd gets just such a moment roughly halfway through the film. She’s decidedly if confusedly falling for Katie, questioning what exactly her newfound feelings mean for her overall sense of identity and presentation. Searching through Katie’s closet for something dressy to wear to a party being thrown by Miranda, she stumbles across a tuxedo that Katie wore to her senior prom. We cut to Cyd striding down the street in the full tux, gazing around her in dreamlike slow motion with a mixture of self-consciousness and swagger. The shot movingly encompasses Cone’s larger approach to Cyd’s sexual awakening and burgeoning romance, finding the moments where exhilaration and bewilderment can barely be disentangled from one another. Indeed, the delicacy seen throughout Princess Cyd makes one narrative stumble all the more notable. Without giving away too much, Cyd and Katie’s bond grows all the stronger after Katie escapes a would-be assault that occurs while Cyd further explores her fluctuating desires at Miranda’s party. Cone engineered a similar juxtaposition of a supporting character’s private trauma with the revelry of a large gathering in Henry Gamble. While this earlier instance felt jolting but earned, here it feels more like an overly expeditious way to move Cyd and Katie’s romance forward, resulting in a rare moment of tonal discordance.

For all the compassionate frankness with which the film details Cyd’s emotional coming of age, Princess Cyd handles Miranda’s quieter self-transformation in perhaps an even more striking fashion. Indeed, Miranda’s arc might be most remarkable for how little she does change. Cone pokes some good-natured fun at Miranda’s casual pretensions. (Parties don’t occur at Miranda’s home, but soirees do.) A dichotomy seems to develop between Miranda’s erudite intellectualism and Cyd’s direct sensuality, with Miranda learning to indulge in some bodily pleasures by joining Cyd for afternoon sun-bathing and opening up about her relatively dormant sex life. If it seems that this will become yet another story of a brainy middle-aged woman “getting her groove back,” Cone has a trickier and subtler emotional journey in store. Miranda forms a genuinely deep, even profound, bond with Cyd while ultimately refusing to concede that her life—replete with intellectual pursuit, friendships, and faith—is bereft for lack of long-term romantic companionship. In a monologue that is the centerpiece of both the film and Spence’s beautifully modulated and lived-in performance, Miranda relates this reality to Cyd calmly but firmly: “It is not a handicap to have one thing but not another, to be one way and not another. We are different shapes and ways and our happiness is unique. There are no rules of balance.”

These lines might double for the belief at the heart of this and all of Cone’s work—that an individual’s complexity transcends labels and narratives, and that the path to true connection lies paradoxically in a radical acceptance of how unknowable (on some level) we are to one another. And isn’t there something a little queer about that?