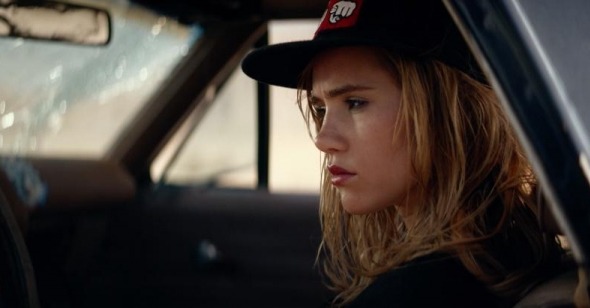 Our Brand Is Crisis
By Adam Nayman

Here is a litmus test for determining how much you’re going to get out of Ana Lily Amirpour’s sophomore feature, The Bad Batch, a postapocalyptic-comedy-thriller-cum-Trump-era-political-commentary (and now I am out of hyphens). If a close-up of an incomplete jigsaw puzzle describing the American flag gets you nodding sagely, perhaps this is the movie for you. If your response to such single-serving semiotics (Haggis-flavored, à la In the Valley of Elah) is to roll your eyes and/or slap your forehead so hard that it welts, then it’s probably best to avoid The Bad Batch and the neat trick it pulls of insulting its target audience’s intelligence while extravagantly flattering its collective, Xennial frame of pop-cultural reference and sense of injustice and alarm.

Like several other 2017 boutique theatrical releases of note, The Bad Batch concerns cannibalism, a gustatory taboo that yields less to chew on here than in either Julia Ducournau’s Raw or Bruno Dumont’s Slack Bay. The metaphors in those movies—insatiable, Trouble Every Day–style sexual desire in the former; eat-the-rich satire in the latter—are both more sophisticated than the dystopic dog-eat-dog philosophy that drives the show-off sadism of the film, starting with the opening sequence, which has its exploitation and eats it too.

We’re in the near-ish future, and the U.S. government has begun a program relocating social undesirables to the Texas desert, where they’re free to live as they please (perhaps the policy-makers recently rented Escape from New York). After being discharged from a faceless processing facility, Arlen (Suki Waterhouse) is left to wander through the badlands alone, but her isolation is deceptive: the hills have eyes. In short order, our heroine discovers the New, Weird America and experiences its rerouted food chain from the wrong end up. She’s stalked, captured, drugged, and carved up by a roving band of flesh-eaters whose expert methods of preparation suggest their latest victim is less an identifiable enemy than just so much grist for the mill.

Arlen survives, but her ordeal costs her—conceptual gag alert—an arm and a leg. She’s saved from further mutilation by a combination of her own ingenuity and the good graces of a nameless drifter (an unbilled and, it must be said, impressively unrecognizable Jim Carrey) who carts her to an adjacent colony called “Comfort,” where she convalesces in safety if not luxury. The tie-dyed exiles here are no less dissatisfied with their refugee status than the cannibals across the way, except that they’ve learned to distract themselves with sex, drugs, and raves. (They’re basically living in the Fyre Festival). The contrast between the two camps is meant to be wickedly ironic, while Arlen’s wariness about fully committing to either side is framed as a show of self-reliant principle.

Returned to her feet (one of which is now prosthetic), Arlen cuts a striking figure to rank with the protagonist of Amirpour’s Tehran-set debut A Girl Walks Home Alone at Night. In that skillfully made and duly overpraised film, the director finessed the central, recurring image of a slender, chador-clad vampire into something startling and resonant, and also defiant—its challenge sliced across genre and gender lines simultaneously. The Bad Batch, which is calculated in a different and more cynically targeted way—supposedly the major marching orders from VICE, which signed on a producing partner, were to shift from black-and-white to color and from Farsi to English—makes a telling switch by casting an aloof, Caucasian supermodel as a figure of stubborn resistance. Leaving aside the post-Furiosa derivativeness of her appearance, Arlen’s consistent, fetish-doll objectification is flatly counterintuitive; the way that Amirpour’s camera continually cruises Waterhouse’s ass, which is permanently encased in hot-yellow cutoffs emblazoned with an emoji-style winking face, is no less leering for its scare-quoted self-awareness.

Such is the challenge of appraising a movie that keeps signaling its transgressive intentions: why yes, that is Ace of Base blaring from a portable CD player during a protracted torture scene. The (grind)house that QT built gets another eager tenant paying homage in lieu of rent. If The Bad Batch is no worse an offender in this tapped-out vein than the recent, Cannes-ratified output of Nicolas Winding Refn, that’s not a compliment. Where Refn is truly mindless—and, as such, a true savant, idiot or otherwise—Amirpour seems to have placed herself in a cozily indulgent trance, mesmerized by the possibilities of deluxe, corporately subsidized cult filmmaking.

The gap between enthusiasm and execution is considerable. Simply put, there is no good reason for a genre pastiche with such a slender set of narrative circumstances to run nearly two hours. (The first cut was reportedly close to four.) The slow-motion pacing and soporific musical score are designed to draw the viewer into a dream world, the same approach favored by Refn and his spiritual father Alejandro Jodorowsky (who’s got plenty of bastard offspring to answer for these days). All the extended running time points to is a distinct lack of original ideas. Having set up her heroine as a vengeful, badass outsider, all Amirpour can think to do is transform her into a surrogate mother figure for a lost little girl (Jayda Fink), a truly hackneyed plot point that theoretically keeps things politically palatable amidst the surrounding degradation.

What a white woman is doing sheltering a black child whose mother she’s murdered in cold blood in a movie directed by an Iranian-American is a provocative question, although apparently not one worth answering in full or in good faith. “I don’t make a film to tell you a message, sorry,” Amirpour told an audience member at a Los Angeles screening who queried her about the film’s racial politics. That’d be fair enough except that what’s really, fatally wrong with The Bad Batch is how its half-assed efforts to say something meaningful about the state of the Union—and here I will remind you of that scattered, fragmented rendering of Old Glory—clash with the studied vacuity of its aesthetic program. Amirpour has the visual language of meme culture down pat, and her syntax is occasionally eloquent: shots of stone-faced, heavily pregnant women brandishing machine guns and wearing t-shirts emblazoned with the mantra “The Dream Is Inside Me” gesture vaguely towards profundity. But to paraphrase Glenn Plummer in Showgirls—an inestimably superior tour through the Desert of the Real—Amirpour is a student of t-shirts. The Bad Batch has enough flashy, fashionably grim accessories and accoutrements to fill a Hot Topic.

In the presence of such fully stocked shelves, all the critic can do is conduct inventory. So yes, it’s amusing to see Keanu Reeves play a louche, pajama-clad guru (his second mega-sleazoid role in a row after Refn’s Neon Demon), and yes, there are some compositional and editing tricks that stick in the mind, like a dialogue scene that conspicuously violates the 180-degree rule to heighten Arlen’s hallucinogen-addled sense of disorientation. Others’ tastes may run to Darkside’s shimmery electropop soundtrack or a tatted-up Jason Momoa in hulking antihero mode as the wayward girl’s father. What seems unlikely, bordering on impossible, is that anybody, except maybe the filmmaker from somewhere inside her own self-induced stupor, could mistake this batch of designer items—a veritable grab-basket of deplorables—for anything other than pure, plastic product.