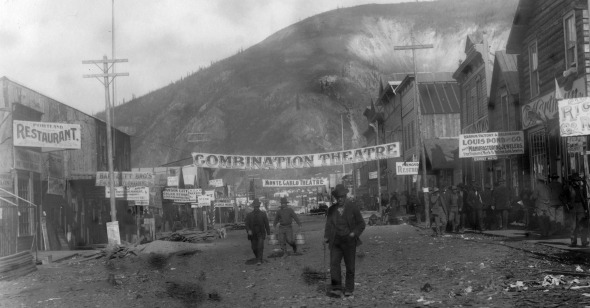 The imminent “death of cinema” has been frequently rebutted and refused by filmmakers and scholars holding on to the past. But this has had little to no effect upon a seemingly inexorable fact: the institutional mode of watching moving photographic pictures as a result of celluloid passing through a projector is fast becoming a thing of the past. And as the cinematic past increasingly recedes we’ll probably see a lot more films like Bill Morrison’s Dawson City: Frozen Time, a documentary that attempts to reacquaint viewers with film as film at the same time as it eulogizes the former material basis of the medium.

Best known for his 2002 compilation of decayed and corrupted celluloid, Decasia, Morrison is a far better archaeologist and archivist than he is a filmmaker. For Frozen Time he has gathered a treasure trove of historical documents, including excerpts from some 500-plus silent-era film reels discovered under a Yukon construction site in the 1970s. Though he aims to sculpt from them a moving narrative evoking the epochal cultural, social, and economic forces that swirled around the development of early cinema, Morrison instead presents his material through a series of ponderous cinematic devices, rendering history an inert mass.

Dawson City is located alongside the Yukon and Klondike rivers in Yukon, Canada, east of Alaska and north of almost everywhere else. Joseph Ladue founded the city in the late 19th century while a collective fervor—the Klondike Gold Rush—gripped pioneers and fortune-seekers rabid to mine the region’s precious metals. As Dawson boomed so did its cultural life: unsuccessful miners became successful entrepreneurs, and the city’s many idle would-be adventurers flocked to establishments offering warmth and lively indoor entertainment, including the cinema. As the last stop on the movie distribution line, Dawson received films years after their initial release dates. The city amassed a huge film collection even as its population and socioeconomic relevance rapidly diminished, but a large portion of those films were ignited or else sent away with river currents whenever the archives became too difficult to manage or technological innovations (the talkies) made the older films obsolete. Luckily some reels were used to fill up a pool being converted into a gymnasium’s hockey rink. In 1978 a recreation center was built over the site of the old gymnasium and many silent films were unearthed, some the worse for wear but others fairly well preserved by a protective layer of permafrost.

Inherently intriguing, this story also intersects with several important historical personages and events. The Gold Rush brought to Dawson City future notables Jack London, Sid Grauman, and a certain German immigrant and restaurateur named Frederick Trump, originator of the Trump family fortune and grandfather of the present, and possibly last, President of the United States. All were drawn to Dawson by the prospect of wealth and new beginnings, but the founding of Dawson effectively displaced and destroyed the hunting grounds of the Tr’ondëk Hwëch’in, a First Nations tribe that had made the Yukon land its home for thousands of years. Supplanting Native American culture was mass (re)produced entertainment, which found consumers even at the farthest reaches of Western civilization. Amongst the rediscovered reels of silent film is footage of the 1919 World Series, infamous for having been fixed by New York gamblers and thrown by eight Chicago White Sox. Perhaps the most captivating material incorporated into Frozen Time from the Dawson collection is from a newsreel that documented an intentionally botched tailor-made double play in the fourth inning of Game One of the 1919 series, a bizarre miscue that led sportswriter Hugh Fullerton to believe something was amiss. (The play was shot from so far off and is obscured by so much grain that it’s impossible to see what Fullerton saw.)

Morrison uses Frozen Time to develop other tangents: the pushback against organized labor in early 20th-century America, the destruction of Canada’s natural landscapes through industrial mining, and the technological and cultural advances of cinema. Unfortunately, Morrison has decided to present a vast majority of the film’s information through on-screen captions. Rather than visually experiencing it, the viewer is forced to mostly read about turn-of-the-century Dawson City and North American history, a disappointment for a film that claims cinema as an era’s emerging medium for seeing and expressing itself. Which leads to the next problem: a substantial portion of Frozen Time is comprised not of footage from the Dawson collection (or footage from pertinent titles like Chaplin’s The Gold Rush), but of historical photographs. Morrison uses the Ken Burns–associated “pan-across-a-still-image” effect for these “shots” (indeed, one of the film’s tangents explains that a National Film Board of Canada’s documentary on the Gold Rush invented this effect), a device that makes the film’s pace excruciatingly leaden. Other methods exist to animate, or cinematically activate, the photographic still: one need only look to Chris Marker’s photographic montage in La Jetée, Hollis Frampton’s burning photos in (nostalgia), and Ken Jacobs’s stroboscoped stills in his Nervous Magic Lantern series for more exciting possibilities. Even the non-photographic sections of Frozen Time belie the efficacy of “the Ken Burns effect.” At the very beginning and end of Frozen Time, Morrison films Yukon historians Michael Gates and Kathy Jones-Gates discussing the discovery of the Dawson collection, and their excitement—however muted by their innate mildness—briefly infuses the documentary with the passion actual human beings possess when the past reemerges into the present. Otherwise Frozen Time is mostly a collection of languidly displayed facts.

There’s a third problem: footage from the Dawson collection is largely compiled into montages featuring what one could call “shared narrative action.” For example, when Frozen Time presents information on the fires that destroyed many archives of extremely flammable celluloid nitrate Morrison cuts to shots from silent films that involve fires. Or Frozen Time will describe a chain of phone calls from those involved with the rescue of the Dawson collection, and a montage will commence of shots from silent films in which someone talks on a telephone. So, besides the 1919 World Series footage, little stands out concerning the unique aesthetic, cultural, or social importance of the individual titles in the Dawson collection—they simply appear to make up one big faceless Silent Film. As per his predilections, Morrison focuses extensively on the strange beauty of damaged footage. That made sense for Decasia, which at least had no overarching narrative for the footage to support. In Frozen Time, however, Morrison forces the hauntingly evocative quality of such footage to speak for the film as a whole. Similarly, a repetitious, glacially morphing orchestral score by Alex Somers (of Sigur Rós) attempts to impart a “like sands in an hour glass” melancholy for a vanished past. Since Morrison does little else to cinematically communicate the importance of cultural history in Frozen Time, these other efforts only amount to overcompensation.

Morrison has long feigned found footage experimentation without innovating radical techniques or producing sublime visual epiphanies in the vein of Marker, Frampton, or Jacobs. Working in documentary mode, Morrison occasionally reaches for cinematic poetry with Frozen Time, but the results are as dry as his ostensibly more lyrical work. In trying to make the cinematic past come alive through modern filmmaking methods—and in the attempt to generate feelings of awe, mystery, and sadness as regards the vagaries of history and lost time—the film ends up as purely informational.