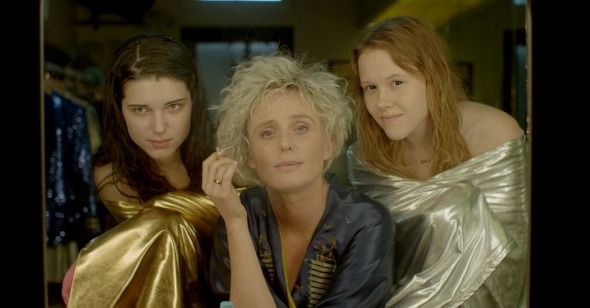 Part of Their World
By Adam Nayman

The little mermaids bobbing in the water off of a beach in Warsaw are drawn to the shore by the song of a handsome young man; surfacing side-by-side in the moonlight, they answer him back in eerily harmonious tones. Their pitch, in a nutshell: “We won’t eat you.” They’ll be on their best behavior. They just want to be where the people are.

The opening scene of Agnieszka Smoczyńska’s debut feature The Lure cleverly reverses the age-old relationship between sirens and their prey. It hints that it’s the fishtailed siblings who are being musically mesmerized, rather than the other way around. It’s a striking cold open warmed up with funny-sexy portent: the heat between the singer and the sisters suggests that the “lure” of the film’s title is very much a two-way street.

At first, both blithe blonde Silver (Marta Mazurek) and raven-haired Golden (Michalina Olszańska) treat their trip on dry land like spring-breakers, following guitar-slinger Mietek (Jakub Gierszal) back to the scuzzy nightclub where he works as a bass player. After allowing themselves to be inspected by the owner—who is less shocked that he’s stumbled across a shocking crypto-zoolgical phenomenon than he is eager to touch the merchandise—they become part of the bar’s nightly floor show. Following a few quick setbacks in figuring out how to stay safely hydrated in their new digs, the girls start working as back-up-singers-slash-strippers, and they clearly enjoy their newfound status as objects of erotic fixation.

This is all perilously close to simple winking exploitation, but Smoczyńska satirizes her heroines’ willingness to be objectified right alongside the leering cruelty of the patrons cheering them on. There’s a deliberateness to the softcore cheesiness on display, and the film has been designed so that the gap between the sisters’ sex goddess stage personas and their anguished inner lives is deep enough for the actresses to inhabit. Their wonderfully physical, wholly unself-conscious performances—by turns goofy, exhibitionistic, and horror-villainess grotesque—go a long way in putting the material over the top (which is its intended destination).

On both a narrative and a thematic level, The Lure borrows from and ultimately honors Hans Christian Andersen’s original fairy tale: it’s a parable about how an ocean dweller’s desire to (literally) rise above her station results in her demise. Seventeenth-century bedtime-story moralism isn’t a whole lot of fun, however, so the script wittily has it both ways by rerouting this tragic trajectory between her co-protagonists. While Silver’s crush on Mietek makes her emotionally vulnerable to the point of basically volunteering to remain washed-up in Warsaw in the name of true love, Golden stubbornly remains armored against the possibility of full assimilation into a Polish society that views her as an outsider. Her eyes are fixed instead on America, and its more liberating possibilities.

There is surely an allegory lurking close to the surface here. The late-eighties backdrop of The Lure is significant beyond the flamboyant retro-aesthetic possibilities it affords Smoczyńska and her crack art-direction and costume-design collaborators, who’ve whipped up a thrifty but fully realized socialist-chintz universe. The film is set just before the Autumn of Nations—the series of uprisings that began emancipating Central and Eastern European countries from Communist rule before the fall of the Berlin Wall—and in this context, the grotesque decadence of the nightclub and its patrons registers as a kind of cultural foreshock. In this environment, American pop culture is a contraband commodity smuggled in and enjoyed under cover of night, and the soundtrack’s selection of carefully curated disco standards—including a gloriously off-brand cover of “I Feel Love” sung by the nightclub’s slightly weathered star attraction (Kinga Preis)—stand as signifiers of a socialist society embracing the sprightlier pleasures of rampant capitalism.

It’s all a pretty nifty inversion of Bob Fosse’s 1972 Cabaret, where the liberated kinkiness of the Kit Kat Club is gradually subsumed by fascism, except that where Fosse famously kept the bulk of Cabaret’s songs (and their embedded allegories) contained onstage—a radical departure from Kander and Ebb’s original book—The Lure functions more like a traditional musical with the company frequently bursting into song. An early montage showing Silver and Golden being welcomed ashore with a no-expenses-spared shopping spree shimmers with giddy MTV materialism; elsewhere, other interludes pastiche Broadway, Brecht-Weill, and militant punk, all filled with amusingly literal lyrics and supported by endearingly clunky choreography.

One possible tonal inspiration would be Joss Whedon’s 2008 web series Dr. Horrible’s Sing-Along Blog, which similarly used sturdy genre archetypes and synth-pop compositions as an armature for some larger social commentary (in that case, a cautionary tale about what happens when the geeks inherit the earth). The paradox of The Lure is that even as its rampant tackiness makes it impossible to take seriously, it’s just unsettling enough around the edges to frustrate anybody hoping to passively enjoy it as a guilty pleasure. When Silver, who’s undergone reconstructive surgery, and Mietek finally get around to trying to consummate their romance, they end up covered in blood oozing from the scar tissue around her midriff—an image that’s startling not just for its taboo sexual implications but also for the visceral implication of how much this stunning, indomitable siren has had to change herself to accommodate her new role.

The preceding sequence, in which Silver is prepped for her (of course, medically ridiculous) operation, is built around an overhead shot of two women being severed at the waist; this is emblematic of what The Lure is attempting: the ragged recombination of elements—specifically, myth and kitsch—on a molecular level. As cinematic Frankensteins go, The Lure is far from seamless, but if the movies are where mad scientists get points for trying, this ambitious experiment in genre hybridity at least deserves some sympathetic dissection.