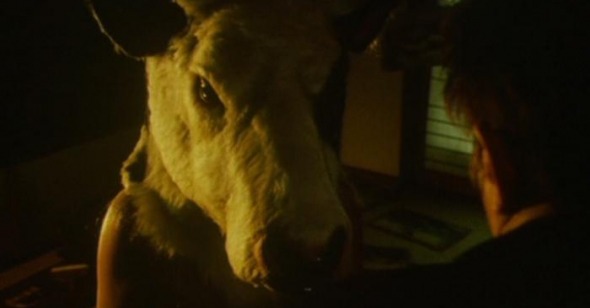 Impressions of a Dangerous Mind
by Michael Joshua Rowin

Among the contemporary masters of world cinema, Takashi Miike is among the most prolific—61 films and counting in the last 13 years—and the most difficult to figure out beyond his role as provocateur du jour. Despite Miike expert Tom Mes’s work of detecting the auteur fingerprints left on sometimes personal, sometimes strictly commissioned films, Miike remains stubbornly elusive. Gozu—film number 55 in the Miike canon, finding its way onto Japanese movie screens in 2003 after originally being slated for a straight-to-video release—improbably defies description with more gusto and sheer lunacy than any other Miike film seen by these eyes. Encompassing yakuza parody, gross-out horror, Freudian sexual discovery, and fever-dream logic, Gozu represents an amalgam of previous Miike classics while also pointing toward new possibilities for a director who, it seems, isn’t afraid to use anything and everything as raw cinematic material.

Gozu (to give some idea of where the film is headed, the word means “cow-head” in Japanese) begins with a strong prelude. After watching cryptic, scrambled video footage, laconic yakuza Ozaki (Sho Aikawa) attempts to save his Boss’ (Renji Ishibashi) life when he eyes a Chihuahua lurking outside their meeting place. “Listen, don’t take what I say seriously,” he says, his words serving as much as a warning for the audience as for the Boss. “Everything I’m about to tell you is a joke.” He then proceeds to explain that the little dog is in fact, a yakuza attack dog, and as a preemptive measure he walks outside, picks it up, and unhesitatingly beats it to death, ending the “hit” by throwing the canine at the window.

With the film’s tone—absurdist, gruesome, cartoonish, obtuse—unforgettably set in the first few minutes, Miike then launches the audience into further realms of the uncanny. A young, green yakuza named Minami (Hideki Sone) takes Ozaki on a ride through post-industrial Japan in order to whack the clearly demented and paranoid older “Brother.” Harboring doubts about the job because of an unwavering loyalty to his Brother, Minami finds himself home free when he stops the car short and accidentally kills Ozaki. The body is left in the vehicle while Minami attempts to call the Boss at a restaurant owned by monosyllabic transvestites. But after a bout of food poisoning and some old-fashioned purging, Minami finds that Ozaki has disappeared.

I write carefully about Gozu because the film is another example of Miike’s supreme powers of shock and surprise in a career built upon unsettling the spectator. But unlike the social criticism contained within the violent twists of Dead or Alive and Audition, or the transcendent transgressions of familial freak-outs Visitor Q and The Happiness of the Katakuris, Gozu is—as Ozaki’s warning proves—a lark, a stream of non sequiturs and visual goofs. It also, amazingly, doubles as a love story only possible in a sexually borderless early 21st Century. The virginal, well-endowed Minami, his berserk mentor Brother Ozaki, and a mysterious female who may or may not be reincarnated (Kimika Yoshino) continue the tradition of Miikian kinship and romantic units bound together by perversity. No wonder that Visitor Q’s elixir of happiness—warm, jetting breast milk—makes another appearance here.

The most impressive aspect of Gozu—in keeping with Miike’s development as, yes, an artist—is its unashamed dive into juvenilia and the unrestricted adventures of the id. This is an ongoing theme in the Miike universe, and one little explored by Mes, who too frequently recuperates the director’s visceral, ambiguous subversions of rationality as rational tactics. The term juvenile would seem to be too pejorative, but I challenge anyone to use another word to capture the essence of Gozu, a film predicated on a structure reminiscent of the storytelling techniques of schoolchildren, where this and then this and then this happens according to a strictly preconscious continuity of meaning: “The man was licked by a man-cow in underwear and when he woke up he found a message contained in a leather pouch which told him to drive to a wrecking yard where he met a woman who said she was the man’s male friend . . .” Reviewers have compared Gozu to Cronenberg, Lynch, and Buñuel. Disregard for narrative legibility and the Dadaist search for the sublime at the core of the loosely connected, however, make it something else entirely. The poetic, anarchic accidents of Mad-Libs come to mind. And, in a strange way, the unprecedented turns in story foreground the arbitrary nature of plot progression—each unexpected fork in the road brings an appreciation of how as an audience, we are at the complete mercy of Sato and Miike’s whims.

Miike’s skills as a director bring out the best, and de-emphasize the worst, of this free association game. Rather than rush into the most sensationalist moments or indulge in frenetically edited gratuitousness, Miike shoots and constructs the film with patience, teasing and piquing audience interest. Nobody is better at making an audience squirm and/or hold it in rapt disbelief at what it is seeing, and Miike uses long takes and strategic camera positions to milk (ahem) the madness whirling around Minami (as well as his priceless reactions to it) for all it is worth. While a few scenes fall flat—most notably the innkeeper’s sadistic treatment of her psychically gifted bro—Miike and Sato hit much more than they miss, and the film’s little moments of comic insanity (a woman needlessly driving her car backward at the speed of a fast turtle) are just as effective as the macabre money shots (the look on the Boss’s face while experiencing a painful orgasm, brought on by an unconventionally placed ladle). One of the best setpieces involves a riddle that, for Minami, puts everything at stake. Miike tightens the screws by having a yakuza with white face-paint annoyingly recite the countdown, and brilliantly relieves the tension by adding game-show sound effects.

Gozu may not be as important as Ichi or Visitor Q, but it firmly establishes Miike—for those who still might have doubts—as a master of his craft and one of the greatest cinematic purveyors of the psyche’s sludge and unwanted residue. If one takes Gozu as a representation of the warped universe available to Miike as material for his films, then Minami would undeniably stand in for the feral director, hesitatingly but tenderly encountering the beauty of his own fucked-up desires. As Miike has stated in a recent Village Voice interview: “I just wanted [Minami] to react as a child would amid all the craziness. He regresses to almost zero. Once he reaches zero, all his secret dreams come true.”