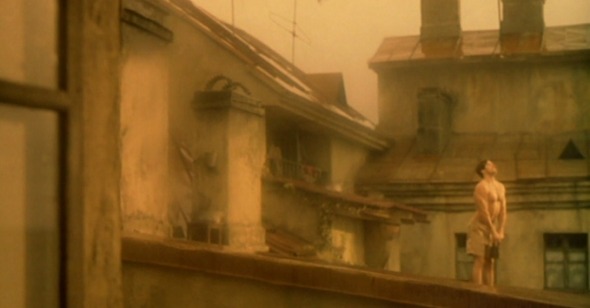 There‚Äôs something disconcerting about the fact that you‚Äôd never guess Father and Son was made by the same filmmaker responsible for its precursor, Mother and Son. Aside from the obvious parent/child link and a subtle co-habitated dream motif, our second helping of Alexander Sokurov‚Äôs planned trilogy on familial bonds is strikingly foreign to its predecessor. It‚Äôs about as far from a sequel per se as I can imagine and yet strangely complimentary; aligned neither in form nor content, Mother and Father are linked almost exclusively by the lush visual brushwork that‚Äôs become a staid Sokurov trademark, yet somehow, they both chill with the same ineffable tenor: one part corporeal, two parts transcendent. One should have expected as much from a filmmaker who‚Äôs current tenure as world cinema‚Äôs poet laureate is in great part due to a defiantly mutable process and artistic ideology. He is, and always has been, an explorer, yet the unsettling revelation of another sui generis success calls into question the last time a second film in a series was loved as much as the first, for entirely different reasons. Most importantly, Father and Son seemed like the film that might finally cement his position stateside as the truly invaluable director he is, a reputation that has found a fascinating foe in the very work responsible for launching his arthouse celebrity, 2002‚Äôs Russian Ark.

Though Russian Ark ultimately made waves, it struggled to cruise the critical waters unscathed, in large part because the resounding discourse remained rooted in eulogizing its one-take feat. As cinematic history proves time and again, such centralized attention to a particular technical achievement lends novelty-naysayers a considerably sturdy tentpole on which to hang their doubts. Though the majority welcomed the film with open arms, it‚Äôs safe to say that Russian Ark has suffered since its premiere from a severe case of Spectacle-Film Syndrome, a public relations-linked condition not infrequently used to pimp foreign films in hope that audiences will concede to read subtitles. Ask any casual filmgoer if they‚Äôve seen Ark and there‚Äôs a good chance they‚Äôll reply, ‚ÄúNo, but isn‚Äôt that the Russian film that‚Äôs all one shot?‚ÄĚ Somewhere in the mix, even the most discerning cineastes begin to lose sight of the bigger picture, and Ark remains one of those unfortunate artistic achievements mired in one-note commentary due to its overwhelming technical fame. Unfortunately, in such cases, everyone loses in the end except the distributors, who can‚Äôt really be blamed for trying to fill seats.

‚ÄúThe other Sokurov film‚ÄĚ available on video with English subtitles, 1990‚Äôs Second Circle, remains difficult to find and twice as trying to watch. Even on the big screen, its disconnected and obtuse images are tough to decipher, while the barely-there narrative, not without its high points, is ultimately yawn-inspiring. It‚Äôs the little known but deeply appreciated Mother and Son that has thus managed to remain the filmmaker‚Äôs most reputable and widely appreciated work in the U.S., though it‚Äôs never received Ark levels of attention. With this in mind, Father and Son becomes a film of greater import regarding the Sokurov‚Äôs tenuous reputation here (in competition at Cannes, the film was passed over by the New York Film Festival committee and received scant press coverage). Needless to say, by the time these words hit the web, it will have come and gone. In its wake, however, a contrail of those privileged to see Father and Son are left with the responsibility of spreading the good word: we‚Äôve got irrefutable evidence that Alexander Sokurov is indeed the finest Russian filmmaker alive.

While he avoided the obvious Freudian forays in Mother and Son, a refreshing choice which kept the film free from strictly Oedipal interpretations, he opens Father and Son with an abstracted fusion of sound and image which reads as overtly sexual. Knee-deep in a Sokurovian dreamscape of duality, he offers an orifice, whispers, rhythmic bodily movement, all restrained enough to remain inscrutable, yet explicit, before pulling out to an image both more and less ambiguous, a naked embrace between Father (Andrey Shetinin) and Son (Aleksey Neymyshev). The term ‚Äúhomoerotic‚ÄĚ has been used in a number of attempts to describe the tender territory plumbed in Father, but ultimately the filmmaker seems less interested in implications of homosexuality than the unique interplay of male bodies, especially those (these) linked by blood. He steps over the line and back, pushing buttons, challenging his audience to reconsider a relationship often devoid of true physical affection in societies and cinemas alike. His efforts are disarming and he effectively manages to capture a physicality rare in cinema, a male intimacy playful and palpable, laced with envy and platonic longing.

The handsome and hulking father is openly envied by his adolescent son, a chiseled but baby-faced youth who desires the muscles of manhood and the adult respect of his beloved old man. A cadet enrolled at a military academy (his father is a war veteran), the son battles his relative physical ineptitude in every overzealous attempt to compete with his far stronger father while playing ball or wrestling. It‚Äôs a struggle which fuels an embittered, ambivalent subconscious and speaks to his simultaneous desire for independence and respect, a trait which makes their complex relationship especially fascinating. If there is a sexual psychology being played out here, it embraces the paradox of division and union sought at once through domination. Ultimately the son‚Äôs goal is his own independence, physically and psychologically, while wholeheartedly wanting his father‚Äôs love and respect; if it sounds like a coming-of-age story, that‚Äôs because it is.

Neymyshev‚Äôs Son takes on Christ-like characteristics. ‚ÄúA father‚Äôs love crucifies. A loving son lets himself be crucified,‚ÄĚ he quotes, and the crucifixion is subtly suggested in a diagram of a man outstretched between gymnasium rings, a symbol of strength and sacrifice which offers insight into Sokurov‚Äôs often frustrating narrative austerity. With Father, he seems less interested in performing through portraiture √† la Mother and Son than in mining the unspoken, the undone, the unseen, and yet to come. While Mother focuses on the end of an old woman‚Äôs life, Father documents the beginning of a young man‚Äôs and whereas the mother/son relationship in the former is marked by an inherent communicative ease, the relative chasm between father and son is palpated only by bold looks and furtive glances. Like one of Second Circle‚Äôs most memorable scenes, in which the protagonist gazes at his dead father as if he‚Äôd never contemplated the man‚Äôs face until that very moment, Father and Son is rife with silent missives between its living subjects. What‚Äôs terrifying here is that a corpse‚Äôs response (or lack thereof) seems tame when compared to the heartache this living father can return with a reluctant smile averted.

Finally, when another young man arrives at their apartment with questions about his own father (whom it seems, served his military time with Schetinin‚Äôs Father), Father and Son are separated as the two young men embark on a memorable, if desultory, trip through the city. Discussing their fathers, their history, themselves, this subplot is most likely to be a point of contention among Sokurov fans‚ÄĒit doesn‚Äôt quite gel, and at times seems forced but provides an excellent excuse to get the camera outside of the cramped apartment in which much of the film takes place. Still, at 84 minutes, Sokurov is typically taut and even in digressions, holds our attention. Peripheral characters, a fatherless young neighbor, a girlfriend, sometimes seem tacked on when not performing their primary functions, but complaints wouldn‚Äôt amount to more than niggling in light of the overall material. DP Alexander Burov lends his earthy hues to Sokurov‚Äôs vision, glossing the mise-en-sc√®ne with a soft-focus luster, fit for a film Armond White called ‚Äúan event in the history of film sensuality.‚ÄĚ

Put simply, Father and Son is different than Mother and Son in all the right ways. Sokurov has again set himself a goal far above the norm and attained it, an example to all filmmakers interested in embarking on a series of related work. The fleeting presence of this film in our theaters begs the question: Will Sokurov ever escape from the shadow of his own Russian Ark with works as subtle and understated as his finest films, or will they remain transitory reminders of the underappreciated Russian who made that one-take feature? Though Sokurov undoubtedly ranks among our most invaluable assets to contemporary cinema, without the benefit of name actors or a technical feat to sell his films, he‚Äôll likely never receive due credit in our country. And that‚Äôs nothing less than tragedy, because he‚Äôs sure got a lot to teach us about making movies.