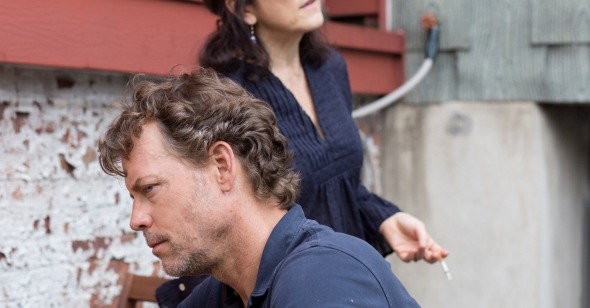 Both Sides Now
By Mayukh Sen

Ira Sachs’s latest film, Little Men, is set in contemporary Brooklyn, a place overrun with white transplants who’ve made a habit of pricing out lifelong black and Latino residents. The gentrifiers here are Brian (Greg Kinnear), an actor, and Kathy (Jennifer Ehle), a psychotherapist; they have a thirteen-year-old son named Jake (Theo Taplitz). Brian and Kathy moveto East Williamsburg from Manhattan after the death of Brian’s father, Max. Max owned a house nestled in rapidly whitening Williamsburg, and the bottom floor is occupied by dressmaker Leonor (Paulina García) and her son, Tony (Michael Barbieri). For many years, Max had let Leonor pay a stabilized rent of 1100 dollars a month for the ground floor, from where she runs a profitable dress shop. But Max's inheritance is split between Brian and his sister (Talia Balsam), who demands that Leonor pay triple her rent or be evicted.

The film charts the gradually blossoming friendship between Jake and Tony, who occupy the same house and attend the same school. Tony is also thirteen, an age that rests at the pit between adolescence and teenagedom. Jake wants to be an artist. Tony, who toes that dangerous line between charismatic and insufferable, dreams of being an actor; he spends the film chasing a goal of attending La Guardia High School for the Performing Arts. The thirteen-year-olds are, quite plainly, foils for each other. The film is stuffed with sequences in which the two boys wander through the city on their bikes. These moments of tonal reprieve romanticize this period of growing up without softening its small agonies. At the same time that their friendship grows, their parents’ disagreement metastasizes into a nasty interpersonal conflict. The rent increase is a topic that Brian would like to broach as delicately as possible, for he's keyed in to the day-to-day stresses of Leonor’s life. Leonor refuses to comply.

In constructing this narrative, Sachs works from his own autobiographical universe, along with those of his collaborators. Sachs, who most recently directed Keep the Lights On (2012) and Love Is Strange (2014), is the father to two four-year-old sons, and he found himself eager to represent elements of the parent-child relationship on film. His screenwriter, Mauricio Zacharias, has a family back in Brazil who owns a retail shop and had evicted a longtime tenant, like Leonor, following a rent dispute.

Sachs constructs this story as a chamber piece. He’s propelled here by a “gotta hear both sides” sensibility, operating under the pretense of lending equal weight to the pains of the bereaving white folk from Manhattan and the Chilean seamstress raising a child on her own. (A subplot involving Tony’s absentee father, who lives in an unnamed African country, was cut from the film during postproduction.) Though objectivity should not necessarily be an aspirational ideal of storytelling, Sachs takes care—at first—to ensure sympathy for all. No character is made of cardstock. Brian is a role that Kinnear could play in his sleep, a fuller realization of the father battered by self-loathing in Little Miss Sunshine; here, he's coming to terms with the fact that he’s failed both professionally and personally. As written, Leonor is a woman whose fierce territorialism is hard-earned. Garcia takes risks with her interpretation, playing her as not always likable.

Sachs could easily have pandered to most of this film’s viewership—well-intentioned folk stricken by white guilt who, as such, may clamor for an easy side to root for (say, the condescending trope of the hardworking immigrant). But Sachs’s aesthetic is calm and observant, and he populates his scenes with medium shots that focus on one actor at any given moment even when they’re in conversation with other characters, as if zeroing in on their thoughts. Sachs says he drew from two of Yasujiro Ozu’s lesser-known fables, I Was Born But… (1932) and Good Morning (1959). Those two Ozu films are ones in which the principal characters, preadolescent boys, go mute to protest their father—the chasm between their generations seems too big for the children to bear. As in those two films, Jake and Tony end up going on a talking strike with their parents, vowing not to speak until they resolve this conflict.

Barbieri has already walked away from this film with his share of critical flattery, and undoubtedly will be met with more. A student of acting at the Lee Strasberg Theatre & Film Institute, Barbieri got his role after responding to an open casting call. It is not entirely surprising that he’s been met with such acclaim—his is a rich part, wherein the trials of postadolescence flood the screen. In one scene, a screaming match exercise between Tony and his acting coach (Mauricio Bustamente), Tony parrots the lines that his teacher spews at him. He tries to match, and then out-act, his teacher. It’s a sequence that tests the viewer’s patience, ultimately in service of demonstrating this budding teenager’s perception of what good acting is—and also the sense of desperation lurking beneath his cool kid demeanor. Barbieri is the kind of precocious talent one hopes directors will nurture rather than bulldoze over. Since the film first screened at Sundance, Barbieri’s been cast in a Stephen King adaptation, Nikolaj Arcel’s The Dark Tower, starring Matthew McConaughey and Idris Elba. The New York Times has already proclaimed his a “breakthrough performance of the summer movie season.” Worryingly, he’s already been cast in the next Spider-Man movie.

Taplitz has garnered considerably less praise, perhaps because his role doesn’t beg for it. His performance is the more delicate of the two, and it’s largely internalized, confined to small gestures that convey how this episode has battered his peace of mind during such a pivotal period in his life. Taplitz has cited The 400 Blows as one of his favorite films. Antoine Doinel, both through Jean-Pierre Léaud’s abilities and Truffaut’s keen way of observing him, was a character whose feelings were clear even when he wasn’t speaking. Taplitz is an entirely different performer than Léaud was at that age, less petulant and moody, his face more soulful; Taplitz’s body language communicates meekness and insecurity, while Leaud’s radiated brash, boyish defiance. But like Léaud, whom Truffaut would document aging through many films, Taplitz is the kind of kid who inspires a certain fascination—what will come of him when he reaches adulthood?

It’s ultimately Jake who commands Sachs’s attention. The filmmaker’s interest in Leonor and Tony peters out by the film’s conclusion. That the film abandons Leonor’s narrative wouldn’t be as glaring had Sachs not so convincingly set up the film as an even-handed portrait of the bleeding tensions of two families. Sachs’s sympathies shift to the white gentrifiers—the displacers, not the displaced. He handles this shift gracefully, so that the strains this ordeal have put on Jake and his parents maintain a certain gravity. But it is Leonor’s plight that lingers in the mind. One can only wonder what became of this woman uprooted from the home she’s known for years, and how a filmmaker of Sachs’s attentiveness might have shown it to us.