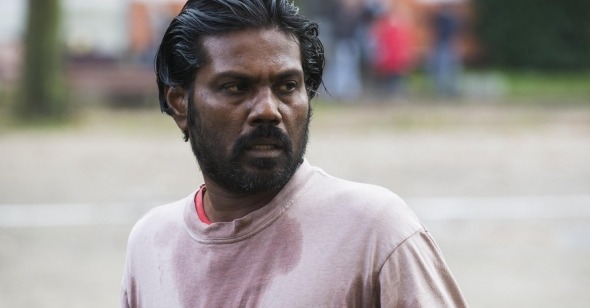 Running from War
by Mayukh Sen

It’s a certain kind of gamble, though not an uncommon one, for a director to cast a non-actor in a pivotal role. This is a storied practice that stretches back at least to Italian neorealism, as in Vittorio De Sica’s Bicycle Thieves (1948) and all the directors and movements neorealism inspired, from Satyajit Ray and Mrinal Sen of Indian Parallel Cinema to Abbas Kiarostami and Jafar Panahi of the Iranian New Wave. There’s always a chance the non-actor’s inexperience will be so nakedly obvious, the deficiencies so glaring, that his or her onscreen presence will prove fatal for the film. In other cases, though, those non-actors will lend a sincerity not even the most carefully trained actors can bring. On occasion, mainstream Western cinema has relied on this tactic—think Haing S. Ngor in Roland Joffé’s The Killing Fields (1984) or, more recently, Barkhad Abdi in Paul Greengrass’s Captain Phillips (2013).

In his new film Dheepan, director Jacques Audiard places enormous trust in his lead, Antonythasan Jesuthasan. The 49-year-old Jesuthasan is a man with a furrowed brow and a dark, boorish face, clenched in a constant grimace. Though he has an extensive body of work as a writer, penning a number of novels under the pseudonym Shobasakthi, he’d just acted in two non-studio films prior to this, and they were comparatively bit parts. Originally, in fact, he auditioned for a similarly puny role in Dheepan. Jesuthasan’s character, Dheepan, bears mimetic resemblance to Jesuthasan himself: a former Tamil Tiger child soldier who fought in the Sri Lankan Civil War, Jesuthasan came to France from Sri Lanka in 1993, armed with nothing but a fake passport.

Dheepan, which opens in the U.S. almost a year after it won the Palme d’Or at the Cannes Film Festival, is a fable of three Sri Lankan Tamil refugees who escape to France following the 26-year civil war, which ended in 2009. In its opening scenes, the title character, a soldier on the losing side of the war, sets his military fatigues ablaze. This act is something of a band-aid for Dheepan: it temporarily rids him of association with the war, but it does little to erase that war’s underlying scars. Minutes after setting fire to his uniform, he meets two strangers in a refugee camp: a widow named Yalini (South Indian actress Kalieaswari Srinivasan) and nine-year-old orphan Illayaal (Claudine Vinasithamby). Together, the three assume the identities of a recently deceased family. Fraudulent passports in tow, they set off for France.

Audiard is a titan of French cinema. He conceived this particular film between A Prophet (2009), which enjoyed meteoric international success and also concerned a character with origins in the global south, and Rust and Bone (2012), the misery-soaked film starring Marion Cotillard as a legless whale trainer and Matthias Schoenaerts as her brutish lover. With Dheepan, he’s tackling an unimpeachably serious subject. This alone is catnip for critics drawn to themes of social importance. Critical discourse surrounding Audiard’s film has predictably and lazily applauded him—a director who is very white, very male, and very European—for doing the enormously difficult work of daring to humanize a refugee, that oft-maligned target of xenophobia.

Considering the messenger, along with the tenor of this reception, one might approach a film like this with a modicum of skepticism in 2016. We’ve seen similar scenarios play out before: a white director creates a false universe around South Asian characters, his aesthetic predicated on grit and squalor. This has echoes of Danny Boyle’s Slumdog Millionaire, which had the appearance of social realism but felt dangerously closer to exploitation. There’s a cyclicity to what follows the release of films like Slumdog and Dheepan. They receive rapturous praise; the principals involved enjoy the ephemera of fame; the people and conditions onscreen fade from public memory and back into obscurity. Dheepan has propelled Jesuthasan to momentary stardom in France, and he’s parlayed this into a César nomination for Best Actor. Like Boyle’s, Audiard’s palette is drab and earthy, focused on the texture of the hardscrabble environment that surrounds our principals. The few times Audiard breaks from this aesthetic are when Dheepan finds himself in solitude, and he’s reminded of home: singing Tamil war chants in neon-lit rooms, or watching a news report of the Sri Lankan Civil War on a laptop. Rueful sitars strum and swell in the background.

The film’s first half unfolds tastefully enough, as if weighed down by the topic’s utter gravity. We follow this make-believe family as they play an extended game of house in the destitute suburbs of Paris, where Dheepan takes a job as a building caretaker. The three of them must sustain this long charade for the purposes of survival. Their endgame is assimilation. On rare occasion, Audiard lingers on the faces of the three principals in close-up, treating them with something resembling humanist rigor. There’s a scene in which Yalini, upon coming to France, stands alone in her apartment and prays aloud to Lord Ganesh. As she mutters this prayer to herself, pleading with Ganesh to spare her misfortune in this new land, the camera remains static on her face, awash with fear that the ruse will unravel at any moment.

Humanist moments like these are rare; Audiard is less interested in probing faces than he is in watching bodies in transit. The camera often treats his characters as headless torsos running for dear life. In one of the film’s opening scenes, we see Yalini frantically searching the refugee camp for an orphan she can claim as her own child. We don’t see her face; her head is cut off from the frame, and she’s reduced to a body pacing through the camp in pursuit of her next lifeline. A few scenes later, Dheepan, selling light-up toys to tourists in Paris, runs from cops. Later still, Yalini slinks into a bedroom as Dheepan, horny and starved for sex, follows her; you only see her exposed back as it slips out of clothing and into darkness.

Audiard would have you believe that these characters have stepped out of one war and into another, swirling in the vague chaos of a Paris suburb. It’s a terrain beset by xenophobia, and Audiard fills it with arch, opaque villains who are mostly black men. This constellation of side characters congeals into one villainous blob; as a matter of narrative convenience, they lack humanity. To Audiard, this neighborhood is a bed of violence that triggers Dheepan’s nasty appetite for war. Midway through the film, a chance meeting with a former squadron leader from Sri Lanka coaxes Dheepan back into the throes of conflict. The cancer of war lives inside this man’s mind, and he can’t escape it. The film veers into revenge fantasy, and what follows feels tonally incongruous from the hour that precedes it. Audiard aspires to the operatic charge of Taxi Driver, but ends up with something more like Death Wish with a gloss of exoticism, forecasting his social prediction for a future in which the refugee exacts righteous revenge upon his aggressors. Given the film’s narrative pivot, Audiard’s camera becomes more frantic, too, and less interested in his human subjects.

In the midst of all this, Audiard offers Yalini as an audience surrogate to engender our sympathies. She waffles between charm and revulsion for Dheepan, a man unhinged. Yalini yearns for a better life in London, where her cousin lives; she left Sri Lanka to escape gunfire and violence, but she’s walked into a minefield. Her horror compounds with each narrative turn. She gets what she wants in the film’s inexplicable coda, which unfolds wordlessly and dreamlike over the span of a few minutes, happily displacing the family to a utopia in England. We’re supposed to believe they’ve earned this reprieve. It implies that Dheepan has finally found the antidote to his nasty addiction for war. These impulses will always be latent, but, in the right environment and in the company of the right people—that is, Yalini’s family, Sri Lankans like him rather than black tormentors—he’ll be able to quiet them.

The film ultimately seems to have little investment in portraying or elucidating the Sri Lankan Civil War. The lengthy conflict is incalculably mammoth; Audiard shies away from conveying its enormity. These characters are propelled by a desire to step out of their pasts and sprint towards a better future. Yet the film’s only preoccupations are with the present day. By consequence, the Sri Lankan Civil War remains in the abstract—a glaring miscalculation for a film that trades off Sri Lankan bodies with such ease. The war is more of a narrative device that Audiard fails to anchor in any political or historical specificity. Audiard relies on suggestion and the silent stories that Jesuthasan’s gruff, untrained gestures can convey. By film’s end, it seems that Dheepan has found peace. He has stopped running. But from what? Even if we can see where he’s headed, we never know exactly what he’s escaping.